Students vote to Come Together rather than Unite 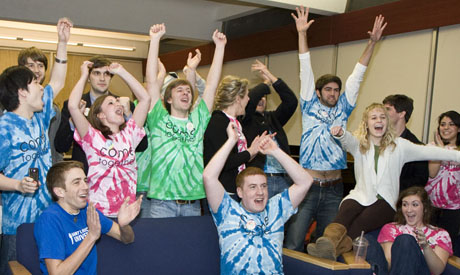 One thousand nine hundred and thirty-three students came together to vote for the leaders of next year’s Student Government Association on Monday, Feb. 22.  With more than 70 percent of the total vote, the Come Together ticket trounced the Unite ticket to win all seven of the SGA Executive Board seats.

Cheers and hugs filled the Griesedieck Hall lobby as the final results came in at the Come Together watch party.  President-elect Courtney Anvender stood up soon afterward to address the success of her ticket.
“I love you all so much, we just won all the positions—guys, we just came together,” Anvender said.
The events in the SGA office—the host of Unite’s watch party—were very different.

A hushed silence came over the then-candidates as the results were announced. Though the results were not as former-presidential candidate JP Johnson had hoped, he said that he felt relief that the elections were over and the results were known.
“It was all about the issues, we ran because we believed in our platforms,” Johnson said. “[Anvender] will do a great job. … This just means I get to keep my hair and graduate in December.”
Anvender said that she would start the first part of her Pius XII Memorial Library initiative to gather student responses for a renovation proposal to be in “really good shape next semester.”

“I think the transition is going to be really smooth and that has a lot to do with how effective we can be next year to build on the progress from the Harriss Administration.”
Anvender said that her executive board has a “really good relationship” with the current executive board, and that these relationships will also be important for this transition. Outgoing SGA President Michael Harriss said that he was pleased with the results, especially the voter turnout.

“I think the Activity Fee brings out a lot of people to vote,” he said.

Four hundred and thirty-eight more students voted in this election as compared to last year, and those elected were quick to take notice of this leap in voter turnout.

“I think the greatest accomplishment right now is the 1,900 votes—that was huge,” Financial Vice President-elect Tim Janczewski said. “It says a lot about Unite, as well: They put out a strong campaign and it was a very fair and open campaign process.”

Election Commissioner Samantha Morr said she thought the voter turnout was due to two legitimate and strong tickets.

“I think it went really well compared to last year,” Morr said.
Approximately twenty-five students attended the Come Together watch party; most of the candidates were standing, anxiously awaiting the results after the advertised announcement time of 8:15 p.m. passed. Eleven minutes later, Morr and the Election Commission appeared on SLU-TV with the announcement. Loud claps and cheers accompanied the announcement of each winning candidate. Harriss said he would encourage Anvender and her ticket to take a good look at their platform, focusing on three broad points.
“It may be oatmealish, but it can be heroic,” Harriss said.
Student Organizations Vice President-elect Paul Paetow felt “relieved” after the announcement.

“I think relieved is a really good word for all the stress and hard work we put in. It is nice to know that it is over now, and that all the hard work and diligence paid off in the end,” Paetow said.
The entire executive board from the Come Together ticket admitted that they spent more than 40 hours a week on the campaign in the weeks leading up to Monday’s election.
“It was everything: the first thing you do [when you wake up] and the last thing before you go to sleep; you dream about it. I’d answer emails in my sleep,” Anvender said.  “[Election day] was nice because everything was done … all we could do was have fun with it.”