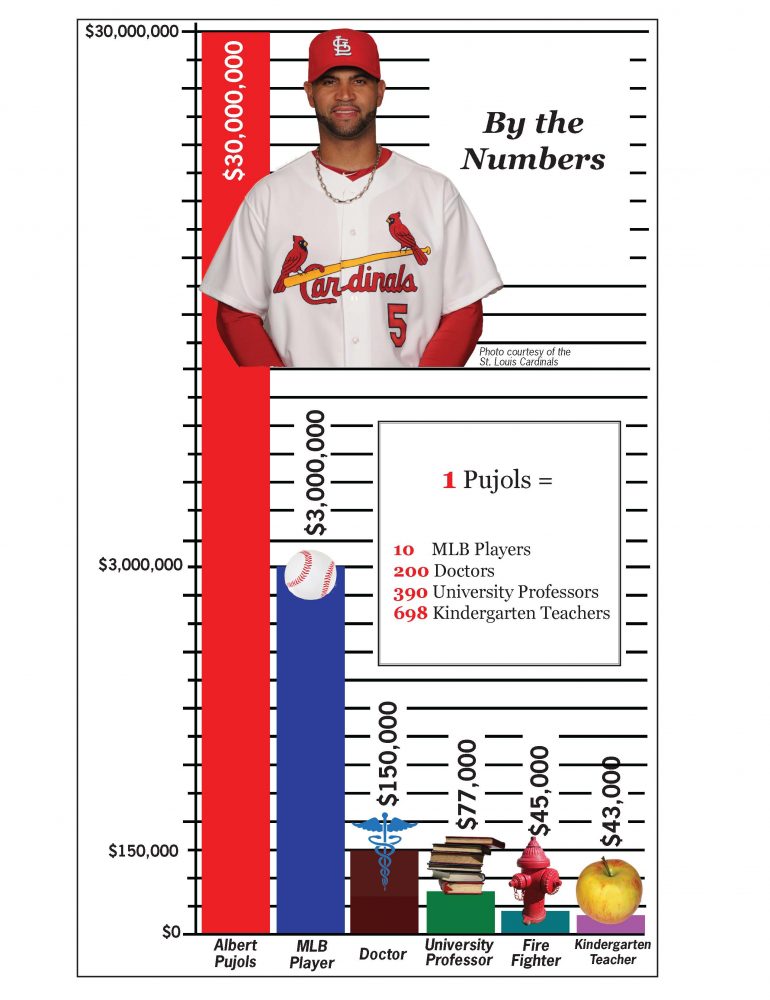 The memory sticks with me like I had just witnessed it. Oh, I had my suspicions all right. I am sure the rest of the world had something similar on their minds at that very moment.

That nagging feeling that a mere mortal was about to cross the threshold into that lonely place in baseball fans’ collective unconscious—the realm of the immortals.

We college kids, products of the steroid generation, had heard the tales of the select few to reach the plateau of pure greatness: Ruth, Mays, Mantle, Clemente, Musial, DiMaggio and Aaron, to throw out some names.

Everyone has a father, an uncle or a grandfather who would recant the seemingly tall-tales of baseball greatness achieved by those who deserved to be called true legends.

It was Oct. 15, 2005, game five of the National League Championship Series.

Despite being someone who bleeds Cubbie blue (Cards fans, continue reading please. I cry Cubbie blue more often than bleed it), I was glued to the TV set. I had been familiar with the Cubs-Cards rivalry, but I have always maintained a high level of respect for the storied St. Louis franchise. Most of that respect had been building around the accomplishments of the larger-than-life slugger who stepped into the batter’s box in the ninth inning of that game.

Staring down Brad Lidge, a closer with some of the filthiest stuff in the game, Albert Pujols cocked his elbow high, began the rhythmic, gyrating tap-tap-tap of his front foot and dug in. With Eckstein and Edmonds on base, “The Machine” lurched his hips and elbow back and uncoiled the most beautiful, yet violent swing I had ever, and still have ever, seen in my life. The result? A walk-off home run that landed somewhere in Canada.

That’s when I knew.

Albert Pujols had crossed the threshold. At that very moment, without a shadow of doubt in my mind, I knew that Albert Pujols was the greatest hitter I’d ever see in my lifetime.

I still hold that sentiment today. With a swing that would make Hammerin’ Hank himself blush, Albert has been the best hitter in the game since the day he set foot into Busch Stadium. Sure, at the time he broke in, there was Bonds, there was Rodriguez, and hell, there was even Manny Ramirez. But even with their steroids and fertility pills, they still couldn’t match the spectacle of Pujols.

Although I have grown away from the game and begun what can be loosely called a transition into adulthood, Albert has always held a place near and dear in my heart.

Pujols has always epitomized the penultimate good guy; he respects the game and shows it on and off of the field. He’s been active in the St. Louis community, and handles himself with a poise and grace which American athletes sorely need. Simply put, he is a real life superhero.

Unfortunately, it looks like he’s falling into the predominant theme of professional athletics—money, money, more money.

For those of you who haven’t been following, Pujols and the Cardinals have reached a halt in their negotiations to extend his contract beyond next season. In 2004, Pujols signed an eight-year, $111 million contract. Last year, he rolled in a cool $14,595,593, but believe it or not, that figure does not even crack the top-20 highest annual player salaries in the MLB. Last year, he wasn’t even the highest paid player on his team. (We’re looking at you, Matt Holliday)

Right now, he’s asking the Cards for a 10-year deal somewhere in the vicinity of $300 million, a contract that would fall second only to Alex Rodriguez’s salary as the highest in baseball. The Cards are looking to give him a seven-year deal worth about $196 million. At this point, it looks like Albert’s not budging.

While comparing his performance and salary to other players in the league, I understand his gripe. There are some definite has-beens making more per year than he is:  Barry Zito, Aramis Ramirez and Todd Helton are some names that spring to mind. Even Rodriguez’s on field performance can’t sniff Pujols’s, especially in the postseason.

The thing is, Albert Pujols isn’t any of those guys. He’s bigger than the bloated salaries and the bottom line. The Cardinals need Pujols. Baseball needs Pujols.

Baseball needs Pujols to put his pride aside and his wallet away and have him realize that he is the face of the game. He embodies some of the few good things that are left in professional sports.

Honestly, what does the man have to prove? Is it a matter of ego? It’s not like the guy is strapped for cash. In his 10 years in the Big Leagues, he’s amassed nearly $91 million in salary alone. That’s not including his countless endorsements with industry giants such as Nike and Under Armour.

Albert Pujols plays a game in a city which elevates its ballplayers to a Godlike status. What he’s forgetting is that he plays the game in a city in which 26.7 percent of its residents live under the poverty line.

To put Pujols’s demands in a context the average American can understand, chew on these numbers for a minute. The average salary of a MLB player is a little bit over $3 million. The average doctor’s salary is a hair under $150,000. University professor? Try $77,000. Fire fighter? About $45,000. Kindergarten teacher? Roughly the same.

Does Pujols realize that the only reason his ridiculous demands are being entertained is because everyday people, people who make a mere pittance compared to the almighty athlete decide to spend a relatively substantial portion of their income to see him do what he does best?

I’d like to see him, or any other professional athlete for that matter, muster up the courage which the real heroes have to summon on a daily basis. I have a hard time imagining any of these so-called “warriors” having the fortitude to run into a burning building for a mere $50,000 a year. I doubt that half of these overpaid and over-appreciated athletes possess neither the patience nor the compassion to handle a group of four-year-olds with kindness on a daily basis.  Last time I checked, some of these guys can’t even take care of their wife and kids.

Listen Albert, you’re the best. You can do things with a bat and a ball that no other human being on the planet can do. This should in no way detract from your superhuman talent or work ethic.

Swallow your pride. Do it for the game which has given you so much and to which you have given so much. Do it for the city whose die-hard love of the game leaves the rest of the baseball world in awe. Most importantly, do it for kids like the 14-year-old version of myself who, for that one moment in time, believed that there are real-life heroes in a sports culture littered with drugs, greed and a me-first mentality.