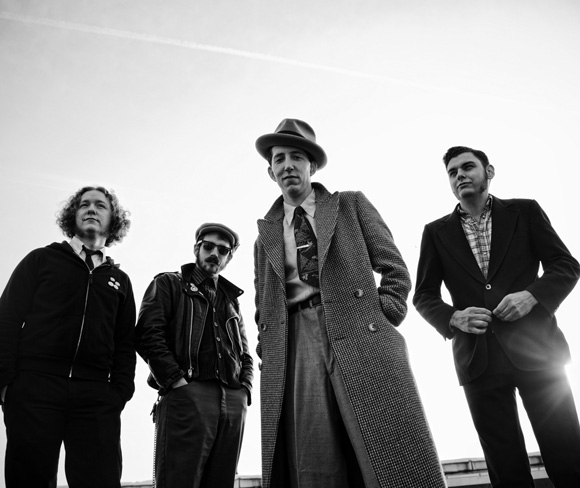 Courtesy of Paul Nordmann. Pokey LaFarge and the South City Three, in a shot from the cover of their latest album “The Middle of Everything.”

Pokey LaFarge, 28, stands no more than 5-feet, 10-inches tall, on a good day. You will catch him wearing a fedora tipped ever so slightly upon his head, a shirt and tie older than your grandfather, Babe Ruth’s slacks and a sly smile that speaks of older times.

At first glance, he may look like a man who is out of place and out of time. His character seems more likely to be found within the pages of a John Steinbeck novel, rather than in 2011. While his style may be a nod to a simpler time, it is certainly no copy. Pokey is Pokey, from every gelled-back hair on his head to the sole of his boots.

He sings about the things every good ramblin’ blues man ought to sing about: good women, bad women, hitting the road, coming back home, mean policemen and the meaning of life.

LaFarge was born and spent most of his early life in Southern Illinois, but he is a St. Louisan at heart. He was raised by historically minded grandparents who were, according to LaFarge, “good Americans—proud of this country and proud of what it is.” They instilled in Pokey an appreciation of what American life and music were like long ago, during this nearly forgotten era.

At age 13, LaFarge became a student of American music and musicians, starting first with legendary bluesmen such as Howlin’ Wolf and Muddy Waters, and digging his way deeper into early ragtime and boogie-woogie piano players, and everywhere in between.

Eventually, he got fed up with the cornfields, packed up and took off for the West Coast. Immediately after graduating high school at age 17, he decided to relive some of his favorite novels and hitchhiked his way over to Oregon, where he pounded the streets earning his food by playing music for passers-by.

In Oregon, LaFarge discovered he could play music for a living.

“People started giving me money for it,” LaFarge said. “Even when folks were not paying, I would still be playing.”

LaFarge said that it took a couple years of living out West to teach him what he loved and valued most about the dear old Midwest. Before making his way home, the rambler hitchhiked through the East Coast, where he stumbled upon The Vultures, St. Louisans and musicians Ryan Koenig and Joey Glynn, playing on a street in Ashville, N.C. LaFarge kept in touch with them and invited them to play his first gig at Off Broadway in St. Louis.

Shortly after, Adam Hoskins joined the band and The Vultures became the South City Three, all hailing from South St. Louis City. The three gentlemen surround LaFarge perfectly. With Koenig on harmonica, percussion and backing vocals, Glynn on the upright bass and Hoskins on guitar, the band comes together to create a delicious gumbo of sound steeped in that old-timey nostalgia.

For those unfamiliar with Pokey LaFarge and the South City Three, just imagine a party with Bessie Smith, Jelly Roll Morton, Robert Johnson, Howlin’ Wolf and Django Reinhardt. LaFarge reminds us that sometimes you have to go back to move forward in life, and that is exactly what he is doing with American music.

LaFarge has four studio albums under his belt. His first two full-lengths, “Marmalade” and “Born in St. Louis,” were both solo, and “Riverboat Soul” and his latest release “Middle of Everywhere,” were recorded with the South City Three. Earlier this year, he released the single “Chitlin’ Cookin’ Time in Cheatham County/Pack it Up” with Third Man Records’ Jack White of the White Stripes. His tunes landed a spot in the soundtrack to the documentary “Brick By Chance and Fortune,” a feature-length film about the historic bricks of St. Louis.

Although rooted in tradition, LaFarge’s style is constantly evolving and progressing. With a strong backbeat and a soulful drive, listeners are quickly thrown into a frenzy of foot tapping and hand clapping until the music is over. We may see a resurgence of the Charleston in St. Louis.

LaFarge said he plays nearly 250 gigs around the world on a 365-day year, and makes each performance an intimate and truthful meeting with the audience. As an avid lifetime traveler, he said he believes that traveling the country is “another education.”

Although he and the South City Three traveled through the U.K., Ireland and the Netherlands this past year, LaFarge said he thinks America is the most inspiring.

“The food, the way people talk, the little minor idiosyncrasies . . . this history, the geography and the architecture– it’s just really inspiring to me,” LaFarge said.

This love for America was shown as LaFarge graced the Americana Music Conference in Nashville, Tenn., this past fall, and landed No. 5 on the Freeform Americana Roots Chart and one of the Top 10 spots on the Americana U.K. Chart.

LaFarge is living proof that American music is not dead— indeed, it is far from that.