“Campaign” not a compelling candidate 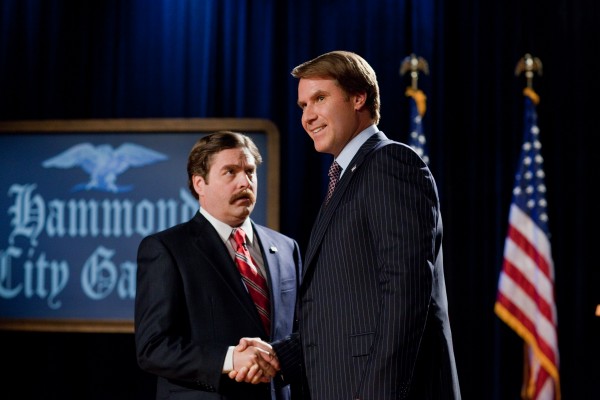 As politics becomes more of a circus, visual media have stepped into the ring and taken advantage of “the political theater.” Films like “In the Loop” and television series like “Veep” (both by Brit Armando Iannucci) have made great satire out of Washington wackiness. Even “Saturday Night Live” was at its best in the midst of the heated presidential race in 2008. But, Will Ferrell and Adam McKay have never had the wit and cleverness of Iannucci.

The newest Ferrell vehicle, “The Campaign” chronicles the race for Congress in a small district in North Carolina. Cam Brady (Ferrell) has swept the district four straight times and looks to coast to an easy victory until Marty Huggins (Zach Galifianakis), a homegrown town favorite, opposes him on the Republican ticket. Huggins’s candidacy is orchestrated by the Koch Brothers…I mean, the Motch Brothers (John Lithgow and Dan Aykroyd).

The majority of the film takes shots at the countless stunts politicians will do in order to win. While “The Campaign” lobbies for relevance, its comedy is too broad and obnoxious. We know that voters in the Bible belt don’t care what you say so long as it contains “Jesus.”

Ferrell has never been subtle, and the screenplay attempts to make comedy mostly by shooting fish in a barrel. There is no nuance here, no insightful observations or any clever humor. It’s exactly what you expect out of a Ferrell film.

Unfortunately, the film seemed to promise a bit more. It’s funny, sure, if you’re into the Ferrell brand of humour. I have to admit, I had a few good laughs. An improvised Ferrell rant, laced with inventive non-sequiturs will always get me, and “The Campaign” has a dozy during a scene in which Brady is bitten by a snake.

Yet, “The Campaign” enlisted director Jay Roach with McKay taking the backseat and a writing credit. Roach directed two intriguing political films for HBO, “Game Change,” and the superior “Recount,” so I had hoped some of that flair might rub off on “The Campaign.” Unfortunately, “The Campaign” more closely resembles Roach’s earlier work with the “Austin Powers” series.

“The Campaign” is disappointing. It is not uproarious, but funny enough. And while it feels like an extended SNL skit, it thankfully is a short film, clocking in under 90 minutes, which keeps the film moving rather briskly. Ultimately what drags “The Campaign” down is a lackluster supporting cast. Only Karen Maruyama as Mrs. Yao, Marty’s dad’s assistant, pulls her weight.

I appreciate that “The Campaign” called out the Koch Brothers, the puppetmasters behind the Tea Party, but this unfocused satire deserved a smarter treatment.