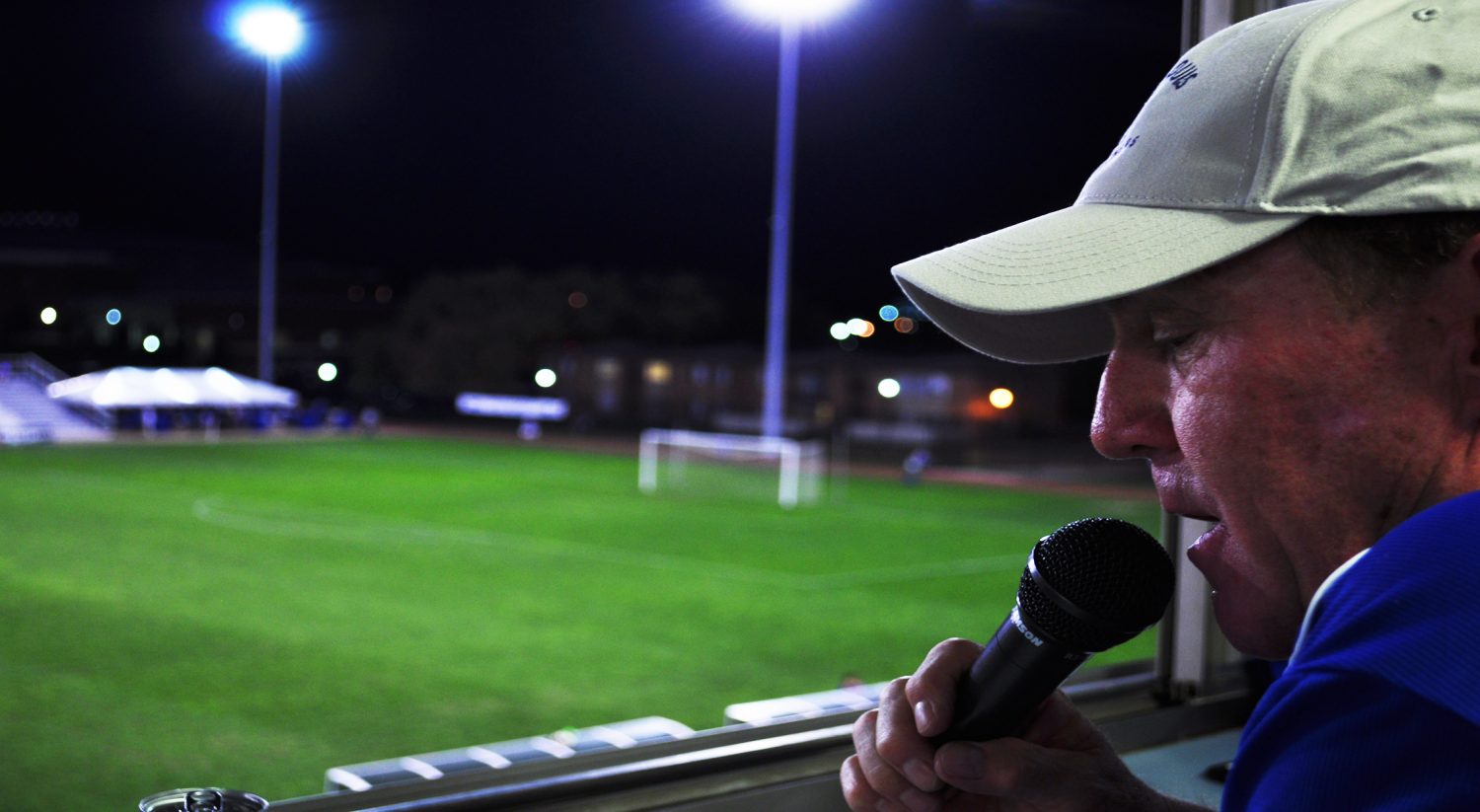 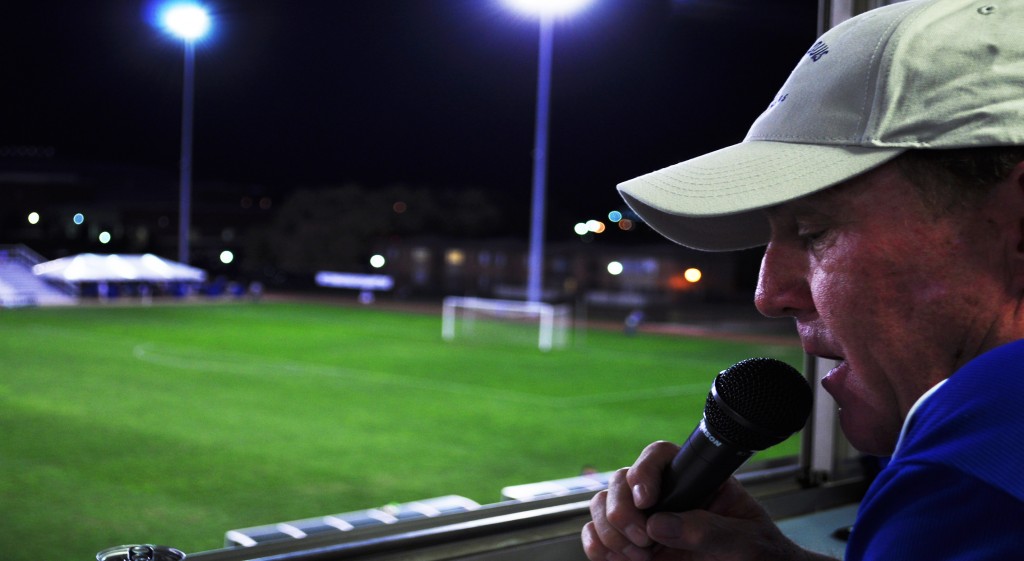 McDermott’s voice might be the most important voice among the thousands that attended the homecoming game, not just because of his position as the men’s soccer public announcer, but because his depth of knowledge of the game of soccer is greater than anyone in the press box and perhaps in the entire U.S.

McDermott was the color commentator for the 1994 and 1998 World Cup for ESPN, announced the first soccer game ever on ESPN (consequently a SLU soccer game), has been the public announcer for the men’s soccer team since 1972 and played for Saint Louis University from 1967-1970, contributing to two national championships in 1967 and 1969.

It is no wonder he is called “Mr. Soccer” by NBC’s Bob Costas. Despite all of his accomplishments both locally and nationally, SLU is what McDermott calls his first love.

“This has been such an immense part of my life, this is my first team,” McDermott said.

McDermott grew up in North St. Louis in Walnut Park and he played at St. Philip Neri, where McDermott said it was a requirement to play soccer.

“It was a sort of indoctrination; the schoolyard was a proving ground for everyone who wanted to play soccer,” McDermott said.

It was there that McDermott first gained an up-close view of SLU soccer; the “commissioner” at St. Philip Neri was famous Saint Louis soccer player Don Ceresia. Ceresia acted as commissioner for the schoolyard and determined when players were ready to move up and play against better competition.

McDermott’s interest in SLU also came from spending time with his grandparents, watching SLU play soccer games on the old fairgrounds. Eventually, McDermott came to SLU to play soccer under then head coach Bob Guelker. However, McDermott and his fellow teammates were soon shocked to learn that Guelker was leaving to establish the soccer program at Southern Illinois at Edwardsville.

“We were Bob’s last recruiting class, but then we learned that they were bringing in Harry Keough and Val Pelizzaro and everything changed,” McDermott said.

Besides watching SLU play while he grew up, McDermott also watched the St. Louis Kutis S.C. The Kutis team was one of, if not, the best teams in the nation and dominated the soccer circuit, winning multiple national championships in the 1950s. In fact, the Kutis team was the designated United States national team in 1958 and played in the World Cup that year. McDermott said Keough and Pelizzaro were the best players on the Kutis team and that he grew up idolizing both of them.

“We knew what it meant to have them as our coaches, we wanted to do the best for our school and family, but we really did not want to disappoint Harry and Val,” McDermott said.

After a few years at the Chicago School of Fine Arts, McDermott returned to St. Louis where he served as an associate athletic director for SLU from 1972-1976 and began to serve as the public announcer for SLU men’s soccer games in 1972. However, his national commentating for soccer began when Ted Kopler at KPLR Channel 11 approached McDermott about being a color commentator for a North American Soccer League game.

“My first national game that I covered was the St. Louis Stars vs. Dallas Tornados, all I remember from that game was that it was hotter than hell,” McDermott said.

Perhaps the height of his commentary career was when McDermott was the color commentator for the 1994 and 1998 World Cup for ABC and ESPN. McDermott also said the best game he has covered was second round game between Argentina and England in the 1998 World Cup.

“Both teams had their history with the Falkland Islands conflict. The ‘Hand of God’ goal by Diego Maradona [of Argentia], in this game, was amazing for various reasons,” McDermott said.

The game went to a penalty kick shootout where Argentina won 4-3. However, the game, is more memorable for David Beckham receiving a red card after being shoved hard by an Argentinian player and then subsequently kicking the Argentinian player.

In his 40 years of covering soccer, McDermott has seen a lot, but is also a historian, comparing memories and past players to the current players he sees on the pitch as he calls games from his perch atop Hermann Stadium. His knowledge is a valuable asset and praised ubiquitously by other commentators.

“Bill brings a different perspective, he is the best historian of the game,” soccer announcer JP Dellacamera said. Dellacamera covered the 1998 World Cup with McDermott for ABC and ESPN.

Dellacamera lived with Bill during the 1998 World Cup for more than four weeks. He said that he was a sincere guy, devoted family man and a superb soccer analyst.

“He always had a smile and a good joke. He was the kind of person you always wanted to spend time with on that trip,” Dellacamera said.

McDermott still has plenty of smiles and jokes when he is in the press box of Hermann Stadium. He frequently compares current players to past SLU soccer players and asks soccer trivia questions that only he knows the answer to.

“Join me and (Central Arkansas’) Daniel Sampedro as we discuss the Spanish Civil War,” McDermott said as he practices his radio voice by using the different names of opposing players in a pretend conversation about an intellectual topic.

However, McDermott’s soccer knowledge is what sets him apart from everyone in the room and in the rest of the nation. His memory of details and sharpness for the game is what makes him different. And of course, his dedication to his university is unquestioned. Even if he was not the public announcer, McDermott says he would be attending every SLU soccer game.

“I would be going anywhere. In 1972, they needed an announcer and I have been doing it ever since,” McDermott said.

Ironically, if McDermott were in another country he would likely be revered, hailed for his sweeping soccer knowledge; however, in the United States he does not receive nearly as much attention due to soccer’s lack of popularity.

However, when one sees McDermott high above Hermann Stadium, reflecting and commentating on SLU soccer past and present, one cannot help but feel McDermott is right where he belongs. There is a reason he is called “Mr. Soccer,” and after spending time with him, it is clear why no one is more deserving of the title.