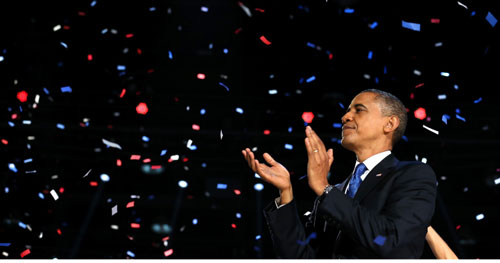 A divided America voted to return Barack Obama to the White House for four more years, despite a tepid economic recovery that has plagued the incumbent since he took office in 2009.

Obama and his vice president Joe Biden now face a deeply divided Washington and a nation searching for leadership on the national budget, tax rates, and the role of government.

“You, the American people, reminded us that while our road has been hard, our journey has been long, we have picked ourselves up, we have fought our way back,” Obama said in his victory speech from Chicago. “We are an American family, we rise and fall together as one nation, as one people. For the United States of America, the best is yet to come.”

While Obama captured the presidency by a slim 50-49 margin, the Democrats failed to regain the majority of the House of Representatives; the Senate, meanwhile, stayed in the Democrats column, with at least 51 seats, giving the president important allies to implement his second-term policies.

Among those allies is Claire McCaskill.

The incumbent Missouri senator eked out a victory against Rep. Todd Akin, who draw bipartisan fire for an August remark declaring some instances of rape as “legitimate.”

McCaskill’s victory was key in the Democratic Party’s hold of the Senate.

“The political chattering class called this race months ago,” McCaskill said.  “But I don’t give up. And now, we’ve shown the nation what Missouri is made of.”

For Obama, the president nearly replicated his 2008 victory with two exceptions – Romney won Indiana and North Carolina. Incredibly, Obama’s so-called “Midwest firewall” of Ohio, Wisconsin, and Iowa held strong against Republicans’ charges of racking up trillions of dollars in debt and gutting Medicare.

Like 2008, Obama’s campaign assembled a coalition of women – suburban wives, single moms, and college-aged – minorities, and Rust Belt middle-class voters driven to support Obama because of his support of the aut0 industry bailout.

“Our economy is recovering, our decade of war is ending, and the long campaign is over,” Obama said. “And whether I have earned your vote or not, I have listened to you, I have learned from you, and you have made me a better president. I return to the White House more inspired and more determine about the work there is to do.”

Exit polls suggested that the economy was, by far, the main issue on Election Day. Romney edged Obama nationally by six points among voters, according to NBC News.

Obama outperformed Romney on questions of empathy, and voters nationwide were virtually tied on the more direct question of who would better handle the economy and the budget deficit.

“This is a time of great challenges for America, and I pray that the president will be successful in guiding our nation,” Romney said.

In Missouri, the changing electorate and a coalition similar to Obama’s lifted McCaskill to a second-term in the United States Senate. Rural voters, independents, and a highly criticized opponent bolstered the incumbent.

McCaskill did not mention her opponent’s remarks in her victory speech, instead focusing her remarks on being a Missouri for all of Missouri.

The senator also paid homage to her mother, Betty Ann, who passed away last week.

“Mom, this one’s for you,” McCaskill said.