Let Us Introduce You: Maurice Roper 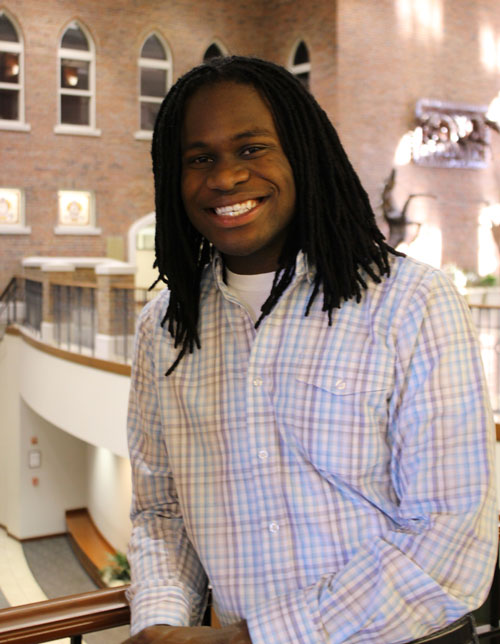 Senior Maurice Roper joined the Bare Naked Statues his freshman year simply because he liked singing. He stuck around, however, because he found a group of people he could bond with.

“The people I met were the main factor for why I stayed,” Roper said. “You don’t want to be in a group with people you can’t connect with. They’re what I’ve enjoyed about the experience.”

Roper is the current president of BNS and has been since January. He has been a member of BNS all four years of college, but began singing long before joining Saint Louis University’s all-male a cappella group.

“I’ve been singing ever since elementary school,” Roper said. “I’ve been in choir most of my life and did musicals in high school.”

Now, Roper said he really enjoys singing R&B style music. Some of his favorite artists include Beyonce, Sia, Miguel and Brandy, but his favorite songs to perform with the a cappella group include “I Believe I Can Fly,” in which he sings the solo, and “Who You Are,” where he is a part of the chorus.

Roper’s favorite part of being president of BNS has been the opportunity he’s had to make a positive impact on the organization.

“I’ve gotten us to a better point than when I first started,” Roper said. “We’re doing different things than we’ve done before and I feel like we’re working toward the best possible outcome.”

During his tenure as president, Roper has gone with BNS to A Cappella Fest in Chicago, attended a cappella classes to improve group motivation and performance and has began to work on BNS’s fourth album.

“We’re working on a new CD with some awesome a cappella producers,” Roper said. “I really feel like BNS is on its way up right now.”

Though he loves working with the guys in the group, Roper said it is not always the easiest endeavor.

“It’s kind of hard to get a group of fifteen males to focus and pay attention,” Roper said. “Everyone has different personalities and I’m trying to figure out a balance that works best for everyone.”

As a finance major graduating this year, Roper said he has plans to work with the Federal Reserve Bank of Kansas City as a consumer affairs bank examiner after he leaves SLU.

In the long term, however, he hopes to go to law school and become an attorney.

When he’s not singing at SLU, Roper is involved on campus as the treasurer of the Black Student Alliance and as a member of SLU Step, the campus’s step team.

He also enjoys playing tennis, catching up on the latest news and world events on CNN, and reading books by Ayn Rand. One of his favorites by Rand is The Fountainhead.

“I also really like watching Judge Judy,” Roper said. “That’s something I look forward to.”

Roper said that though he’s graduating this year, he will definitely miss working with BNS and watching them grow.

“It’s sad because I feel like we’re on our way up and going even farther than we have now,” Roper said. “But I’ll definitely keep in touch.”