Let Us Introduce You: Michael Megarbane 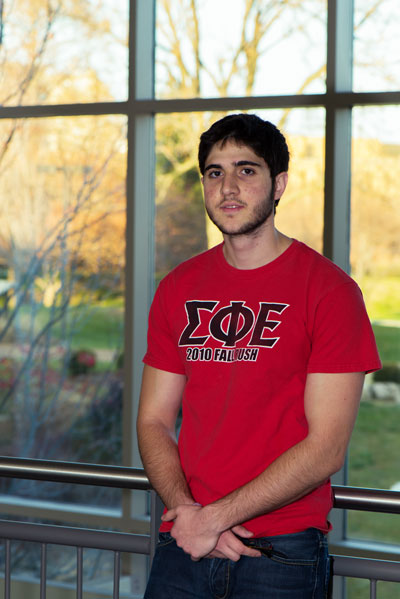 Sophomore Michael John Megarbane may be a U.S. citizen, but his heart is Syrian. Raised in Damascus, Megarbane’s childhood memories are filled with the richness of Syrian tradition and cultural values. While he planned to attend an American university once he graduated from high school, Megarbane’s route to the United States was unexpected.

As a freshman at Saint Louis University, Megarbane immediately declared an international business major and joined Sigma Phi Epsilon. He said his experience as a SLU student has been nothing short of welcoming and enjoyable, and the University has become Megarbane’s new home.
But things have changed this year. Megarbane’s homeland is engaged in a civil war, and his mother and family remain overseas, experiencing the war firsthand. While he speaks with his mother almost everyday via text or phone calls, Megarbane worries for her safety. His mother stayed in Damascus to take care of the family business, and will stay until the danger is no longer avoidable.
Since the revolts in Syria in March of 2011 provoked the civil war between the Alawite government and Sunni army, Megarbane has watched his country destroy itself over religious hatred and oppression, something he said has forced the him to mature quickly.
In Syria, Megarbane’s perception of his government was a positive one: his minority group of Syriac Christians was protected by the government, since the government was also controlled by a religious minority. Now, Megarbane’s opinions have changed, given the recent situation in his country.
“It’s not a perfect world. The president [of Syria] has made a lot of mistakes, but he was the only source of stability,” Megarbane said. “But I don’t support any side that kills, and both sides have now balanced out. People don’t understand that it takes one trigger and this could become World War III.”
Megarbane was born in the United States, but his family immediately moved back to Syria to raise their children. His love for the country began as a child, a love that he didn’t know he possessed until he had already left.
“I never realized how much I love Syria, how much I respected it,” Megarbane said.
Megarbane’s only home had been in Syria, up until his sophomore year of high school when the tensions began. The revolts started, and his American Embassy high school quickly emptied. He said his friends fled to neighboring countries such as Jordan and Lebanon, and the rest headed for Canada and the United States.
Megarbane moved to Kansas City and finished high school in the United States at an all-boys Catholic school.
As the fighting continues in Syria, Megarbane said he hasn’t picked a side in the matter.
“I can’t say what side I’m on. Who cares if I pick a side?” Megarbane said. “For it to stop, it doesn’t take picking a side.”
Megarbane believes that the key to peace lies in productive conversation and avoidance of any international intervention.
“As long as there are foreign hands in the issue, it won’t stop. It takes sitting down and talking peacefully,” Megarbane said. “I don’t know, it might be another Ground Zero before it stops…and then we will rebuild.”
The country’s war may be frontline news everyday and the pressing issue in presidential debates and foreign concerns, but Megarbane remains proud to be a Syrian, something he attributes to the kind nature of his people and beautiful history of the land.
He wants to return to Syria after graduation to work for his family’s business. Megarbane hopes Syria can one day return to being the only Middle Eastern country that allowed the practice of any religion, the Syria he grew up loving and respecting.
Megarbane and his friends, who have become refugees, wish they could go back to their homeland, but Megarbane remembers the words of his best friend from childhood: “We are all in the United States for a reason: to educate ourselves so that we may go back and rebuild Syria.”
Megarbane plans to return to Syria during December to visit his mother, family and friends, but also to see the war and experience it firsthand. The plans are not definite, however, due to the increasing risk associated with visiting.
“If nobody would stop me, I would go,” Megarbane said. “My blood is Syrian.”