Rhetoric on race in St. Louis 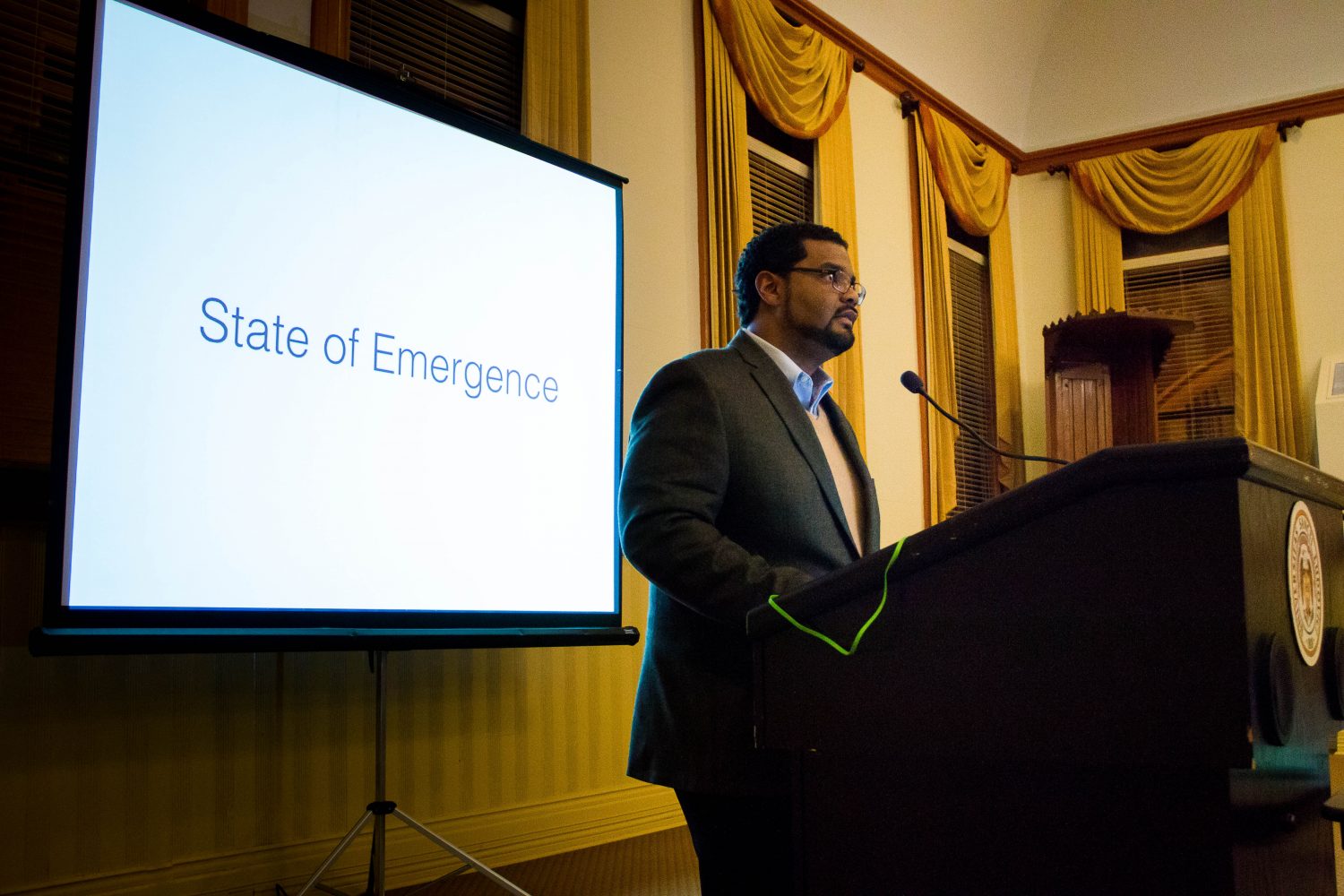 “Nothing new happened on Aug. 9,” said Antonio French, the keynote speaker during the political roundtable in DuBourg Hall and the Alderman for Ward 21 in St. Louis.  The discussion that evening, Nov. 18, was about the ongoing dilemma in Ferguson, Mo.  DuBourg’s Refectory Hall was filled with students, alumni and teaching staff, ready to discuss their opinions and question experts on various topics relating to the topic.  Experts in the fields of race relations, education, crime and health care were present.  French also was present to answer any questions.

Before fielding questions from the audience, French gave insight into the plight of minorities in St. Louis and St. Louis County, and the disparity between the worlds of affluent neighborhoods and impoverished ones.

“[T]he situation was allowed to fester,” French said, referencing the racial and socioeconomic divide that is characteristic of St. Louis.  “Missouri never had to deal with race issues like Mississippi or Georgia … we suffered for not having these conversations.”

French emphasized that Governor Nixon’s declaration of a State of Emergency was overblown as a “State of Fear.”  French posed the idea that St. Louis is in a “State of Emergence” instead, meaning that the voices of minority groups or groups with less power could be heard.

The two worlds of St. Louis are now colliding.  For many in the area, opportunity is abundant.  Tuition for Saint Louis University High School, a leading private school in the city, is over $15,000, before any scholarships or financial aid.  Students at high schools like SLUH can expect more opportunity than students enrolled in schools located in neighborhoods such as North Riverfront, which has a median income of only $25,000.

French said, “Your experience is defined by where you’re from,” and that conversations need to be had between these two worlds.

Students present at the roundtable were from diverse backgrounds and from many different fields of study including sciences, humanities and theology.  Several students were present who had participated in the protests on campus.  One such student voiced his disappointment with the way the protests ended on campus.  He felt that the protestors did not want the students involved.

One student works at a restaurant off campus and voiced the concerns of his manager during the initial rioting over the summer.  The student felt that he was pushed toward siding with the police when he first heard about Ferguson, due to his experiences and the fact that his manager’s brother is a police officer in Ferguson.

An expert on race relations, Dr. Jonathan Smith discussed the important role social media has had in bringing Ferguson to the public’s attention, referring to it as “#Ferguson.”

“Conversations aren’t restricted by proximity,” said Smith, on the ability to now discuss race via social media between communities that have been historically separated.  “Race conversations don’t have to be kept away.”

Smith discussed how there are two ways social media can go in a discussion: the echo chamber and amplification.  The concept of an echo chamber is when a person chooses his or her media based on preconceived notions and tunes out conflicting reports, only hearing the echo of his or her own beliefs.

Smith felt that the anonymity provided by some forms of social media like Yik Yak provide the ability for users to make inflammatory statements and face no consequences for doing so.  Smith felt that Twitter and other media that required the user to make an account with a name were more able to limit a person’s ability to evade repercussions for their words.

Smith finished his discussion with his belief that St. Louis is not in a State of Emergency, despite Gov. Nixon’s assertions, and that more young voices need to be present in the discussion of Ferguson and the rest of Greater St. Louis.

For those students interested in the protest, or wanting to be involved in helping the community, St. Francis Xavier Church will be open for 48 hours after the grand jury decision is announced.  During this time, volunteers are being asked to help people seeking refuge at the church.  Help will be provided to those seeking food, medical aid and spiritual guidance, and the “Safe Space,” as it is being dubbed, is open for anyone, not just protestors.

“Conversations need to be a little painful,” said French, on the discussions he wants to be had between the divisions of St. Louis. “We are a teenager, full of potential … if we can mature, like these young leaders in Ferguson, we are going to be fine.”