NCAA team of the week: Women sweep A-10 weekly accolades 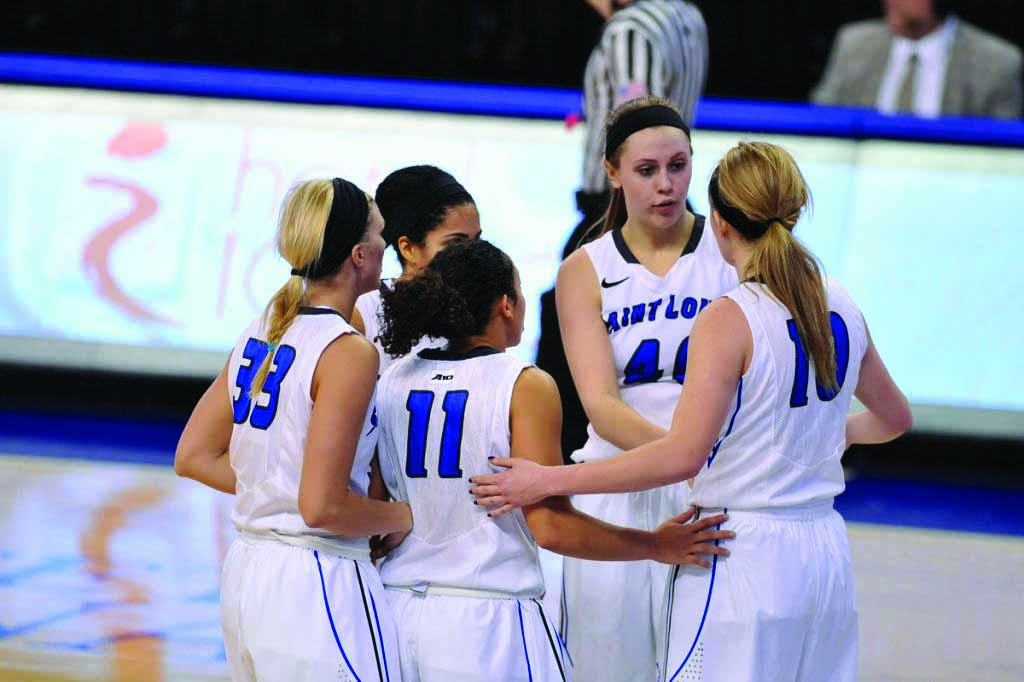 Coming off of a huge win against No. 20/21 George Washington, the women’s basketball team hit the road to play Davidson on Saturday, Feb. 14.

Davidson went on a 13-7 late-first-half run to go up 33-30, but a layup from redshirt senior guard Desirae Ball and a jumper from sophomore forward Olivia Jakubicek gave the Billikens a 34-33 lead at the half.

The Billikens slowly pulled away in the beginning of the second and had a 50-42 lead with 10:52 remaining in the game. Sophomore center Sadie Stipanovich drained a basket to ignite a 20-5 scoring spree for SLU, which give the team a 68-47 lead that led to a 77-59 victory for the Billikens.

Stipanovich led the offense with 20 points and 8 rebounds, making it four games this season in which she has scored 20 or more points, while Vliet added 14 points and Jakubicek contributed 13. This victory improved the Billiken’s record to 13-12 overall and 6-6 in the A-10. Another notable for the game is the fact that the Bills have scored in the 70s in four consecutive games for the first time since the 2006-07 season. The Billikens are also above the .500 mark after 25 games for the first time since 2002-03 and shot a season-high 53.7 percent from the field in the victory over Dayton.

The women played St. Bonaventure at home on Wednesday, Feb 18., in a game that ended in a shocking loss to the Bonnies. Junior forward Denisha Womack and redshirt junior guard Jamesia Price both had eight points for the first half and SLU entered the locker-room with a 30-19 lead.

After both teams experienced a scoring drought at the start of the second, Stipanovich hit a short jumper to get the offence to get the team back on track. The Billikens extended their lead to 20 but the Bonnies launched a brilliant comeback and outscored the Billikens 38-25 in the half.

The game came down to the final play, as the Billikens had the opportunity to tie with 9.7 seconds on the clock, but Vliet was stopped in the paint. The lack of a foul call on Vliet’s drive was questionable – it appeared that she was bumped by a defender – but the whistle did not blow, and the game ended as a 57-55 loss for the Billikens.

SLU converted on only one of its last 12 scoring attempts and allowed St. Bonaventure to go on a 24-4 run in 5:35 to take a 50-49 lead with 3:46 left in the game. Both teams shot poorly from the field, with St. Bonaventure hitting 35 percent of their shots compared to 25 percent from the Billikens. Stipanovich led the team with 16 points and 13 rebounds, adding another double-double to her career. The loss dropped the women’s record to 13-13 overall and 6-7 in the A-10.

The women’s basketball team dominated both the NCAA and the A-10 conference in awards this week. After their stellar performance against then-ranked No. 20/21 George Washington, the Billikens were named the NCAA women’s team of the week. Individual awards went to sophomore center Sadie Stipanovich, who earned A-10 Player of the Week, and freshman guard Jenny Vliet was named Rookie of the Week.

The Billikens will play George Mason, at home, on Saturday, Feb. 21, at 7 p.m. The team will be promoting breast cancer awareness by handing out pink Billiken T-shirts to the first 1,000 fans. The “pink-out” will also include several fun activities. Between 6 p.m. and tip-off, local sports mascots “Fredbird,” “Rampage,” and “Ruffy” (the River City Rascals mascot) will entertain fans.

George Mason currently sits at 13-13 overall, with a conference record of 5-8 after an 82-51 loss to Saint Joeseph’s.