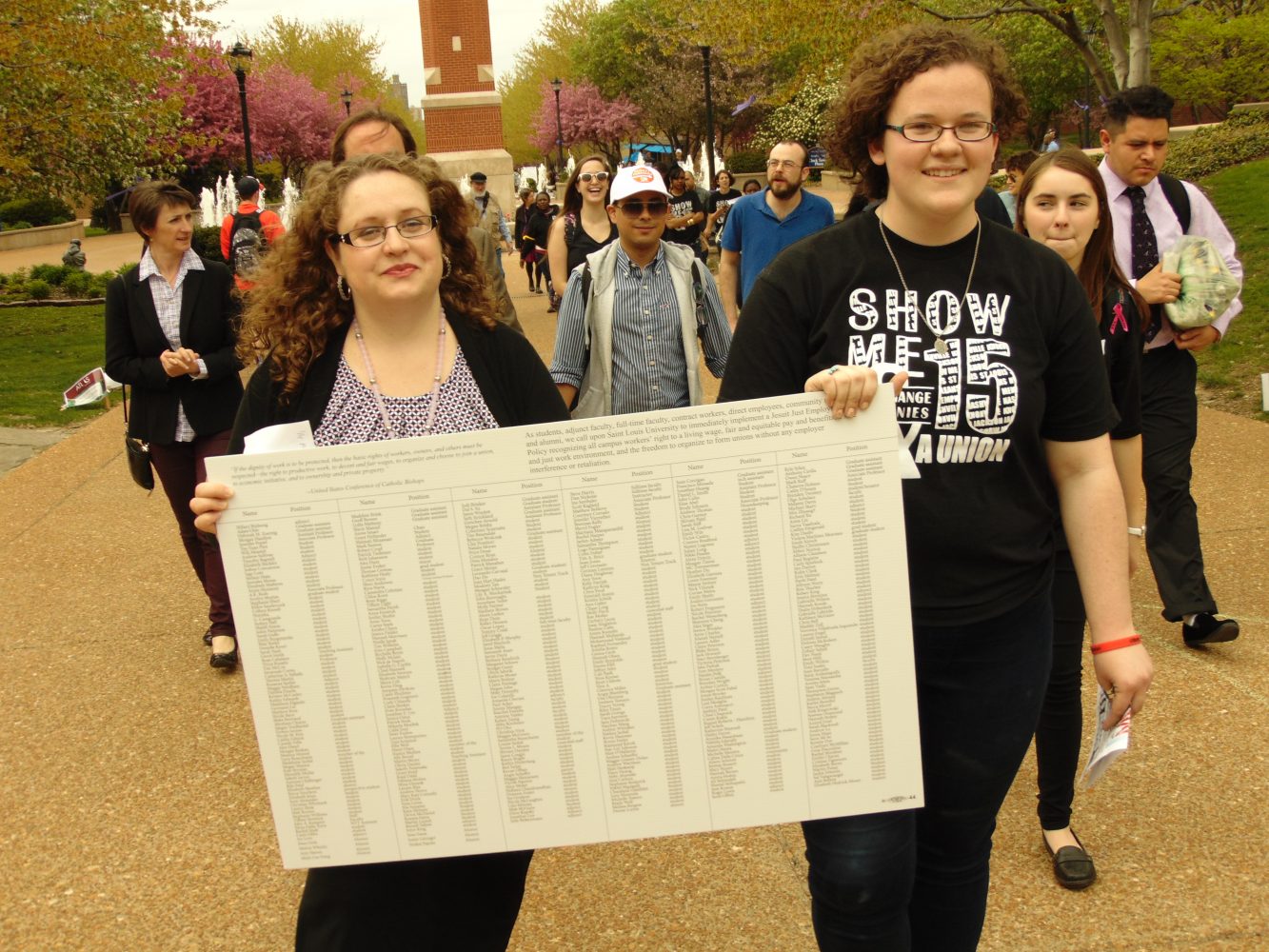 Rally held at SLU and Wash U, petition delivered to administration

On Wednesday, April 15, workers and supporters from the St. Louis area gathered at Washington University for the “Fight for 15” rally, which sought to inform and seek change for low wageworkers. The rally was in conjunction with similar protests taking place across the United States.

The “Fight for 15” campaign was founded in 2012, after fast food workers went on strike in New York City in order to generate awareness and convince employers to improve wages, benefits and union rights.

At the rally, workers and supporters spoke out about workers’ rights and the need to raise the $7.65 minimum wage in Missouri – a wage many find it difficult to live.

“Helping people get a living wage just helps them live well, and anybody who works hard all day long deserves to live well,” said Hillary Birdsong, an adjunct instructor at Saint Louis University.

Birdsong, an instructor in the languages, literatures and cultures department, spoke at the “Fight for 15” rally, but also participated in another low wage demonstration that took place on SLU’s campus on Wednesday afternoon.

In conjunction with the “Fight for 15” rallies, a group of over 50 students, adjuncts and full time faculty delivered a petition to President Pestello’s office in DuBourg Hall. The petition received over 600 signatures, which supports the adjunct instructors’ request that the administration recognize their desire to unionize and the request for improved wages, benefits and job security.

Similar to other low wageworkers, adjunct instructors at SLU and universities across the country, find it difficult to earn a living wage.  At SLU, adjunct instructors teach over 40% of the courses offered and they earn $3,000 per course. Since most adjuncts only teach a few courses, they are not qualified for benefits. Another grievance of the adjuncts concerns the lack of job security, since they are employed on a semester-by-semester basis.

In the case of Birdsong, her income for teaching one course and two labs, as well as acting as a lab assistant, comes out to $1,203 per month, which adds up to roughly $10,000 a year.

“You can’t live off that. So I have to have multiple jobs to be able to support myself,” Birdsong said.

Another adjunct in the languages, literature and cultures department, Antoine Valdez, agreed with Birdsong’s sentiments that the wages from working as an adjunct alone are not enough to live off.

“Today, I had an interview, which had nothing to do with teaching,” said Valdez, who teaches Spanish at SLU. “I feel that I’m disposable, in a way.”

Birdsong and Valdez both have to work other jobs in order to supplement their income as an adjunct, which they feel serves as a disadvantage to their students.

“I’m constantly running around; I can’t give my students more office hours, I don’t have time to plan lessons for them,” said Birdsong.  “And I love teaching, that’s what I want to do, that’s why I’m here.”

Birdsong and Valdez were both present on Wednesday when the petition was delivered to the administration and accepted by Vice President and Chief of Staff Bridget Fletcher and Vice President for Human Resources Michael Luna.

Sarah Nash, a junior SLU student, spoke on behalf of the students during the presentation of the petition.

“I picked this University because of its commitment to social justice and because of its Jesuit mission, so I was really appalled to hear about the working conditions of our adjunct faculty here at SLU,” said Nash. ““If we truly live out our Jesuit mission to be men and women for others, I think that really requires that we do that here on this campus first and foremost with the people who we employ.”

Sheri Anderson-Gutierrez, an assistant professor at SLU, spoke on behalf of the adjuncts and faculty and asked the administration to stand with them in their pursuit for better conditions.

“As the representatives of the administration, we’d like to ask you today, will you support SLU adjunct faculty by pursuing this Jesuit Just Employment Policy?”

They presented the petition in solidarity with both the “Fight for 15” rally, as well as other Jesuit universities who have signed the same petition.