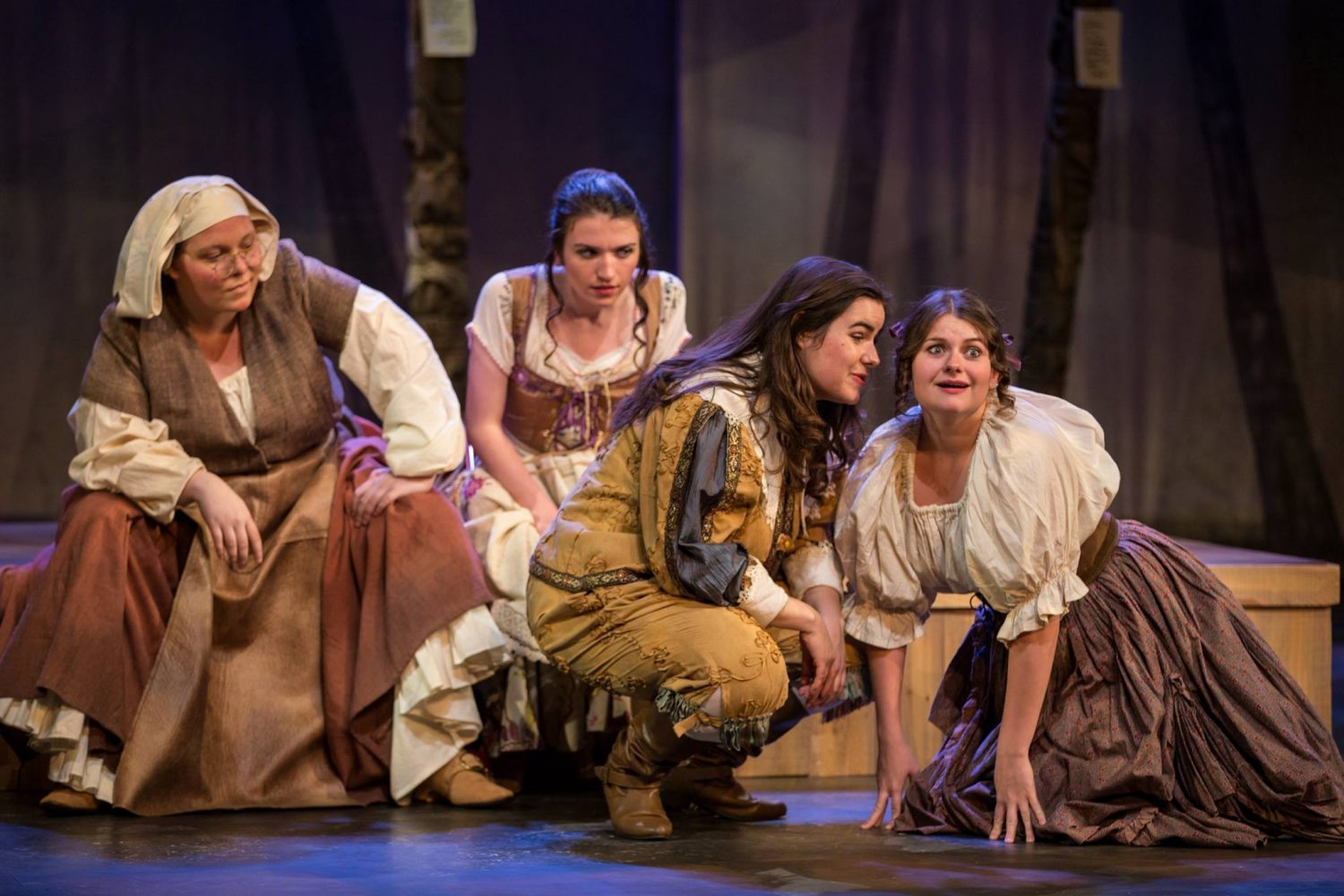 SLU closes out its theater season with Shakespeare

The Saint Louis University theatre department debuted its final show of the school year Friday night, April 24: William Shakespeare’s romantic comedy, “As You Like It,” directed by Nancy Bell. The production is the first Shakespearean play performed on SLU’s main stage in four years.

“As You Like It” is one of Shakespeare’s first and most frequently performed comedies. While the play is not as well known as his later works, it is generally held in high regard and contains many similar thematic elements to his more famous works.

The play takes place in duchy France and follows young lovers Rosalind (played by Katy Keating) and Orlando (played by Anthony Kramer) on their separate conquests to reunite, following their exile from the royal court. Full of encounters with unique characters along the way, the story chronicles their separate journeys back to one another in light-hearted fashion, with plenty of comical gender reversal and exploration of gender stereotypes, a standout theme of “As You Like It.”

Senior theatre major Sarah Griffith, who plays both the conniving Duchess Fredericka and the dull-witted sheepherder Audrey, describes the play’s accessibility as a “fun show for audiences and a fun show to do”.

With that being said, “As You Like It” is still a Shakespearean play, and it can be easy to get bogged down in the dialogue. One might find oneself desperately trying to keep up with the actors amidst the rifling off of one foreign sounding sentence after another. However, if one forgoes the desire to decipher each phrase, it becomes much easier to appreciate the play as a whole.

Building on that, the actors – under the direction of Bell – do a fine job of adding a much-needed emphasis to lines that are intended to be funny or important to the plot, making the Shakespearean dialogue easier to digest.

This was no easy feat, according to Griffith, who described the nearly two-month long rehearsal process as “equal parts text work, equal parts on our feet working scenes,” and it was made possible only through the cast’s “love of Shakespeare.”

Since “As You Like It” is a Shakespearean play that takes place in both the royal court and the sprawling forest, the set is minimal, with the production relying more heavily on extravagant costumes and a well-crafted lighting design, which gives the production a whimsical feel. Griffith aptly describes the production as “a feast for everybody’s eyes and ears.”

As a result of the great line delivery paired with well-designed costumes and lighting, the production does well to remain true to Shakespeare’s blueprint, while adding just enough to make the production unique, fun and worth the two-hour run time.