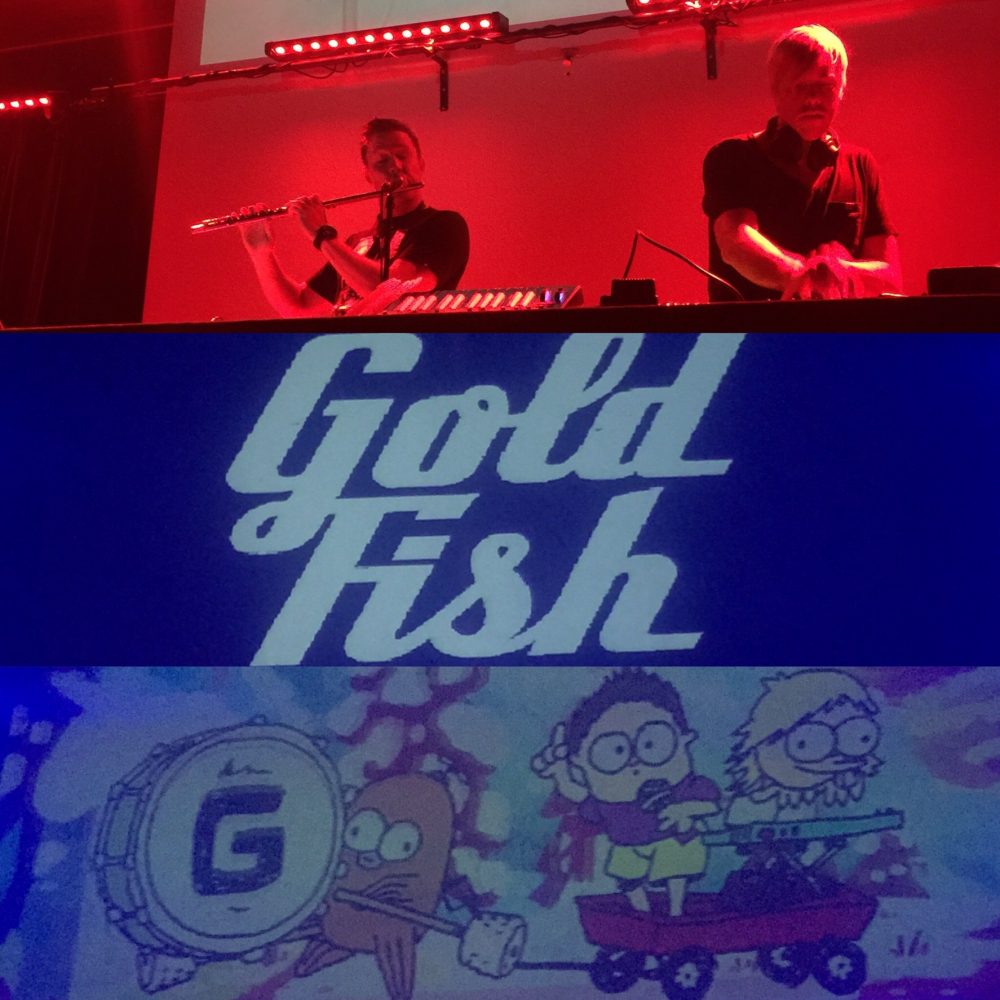 To end the day of LouFest performances on Sept. 12, 2015, Goldfish performed at the Old Rock House at 11p.m. as part of a tour to promote their single, “The Storm”. The venue is a small, raw and intimate one, decorated with Goldfish logos to insinuate the ‘Fishies’ swimming into St. Louis for the first time.

Lights of every color flashed wildly, while videos, which included shots from the band’s distinctive cartoon music videos, were showcased behind the duo that is Goldfish: Dominic Peters and David Poole.

“The music videos take on what seems like a bit of an attack,” Poole said.

At the show, I would describe the environment as the people and the lights unifying the energy in the room, creating an amplified bliss where everyone’s energy was accepted.

The visual experience of the videos and lighting is one of the aspects of Goldfish – as a band and performance – relating them to electronic dance music (EDM).  In the 1980s and 1990s, EDM was seen as more of an alternative musical style, characterized by bass beats and machine made music.

Goldfish’s use of double bass is part of the characterization of the bass of EDM, but also gives the group a feeling of jazz music. Although Goldfish is often viewed as part of the EDM sound, their use of instruments and incorporation of jazz set them apart.

“It’s important to make something that stands the test of time,” Poole said.

Peters and Poole met while studying jazz music at the University of Cape Town, in South Africa. Peters specializes in the double bass, groove box, keyboards and production; while Poole focuses on effects, engineering, mixing, production, samplers and both soprano and tenor saxophone. Goldfish described their songwriting process as unique for each track. “When we’re writing, we can imagine a scenario, kind of like making a movie,” Peters said. “It’s like having kids, you want everyone to be the best they can be … You kind of pull from all different ideas and things that happened, experiences you had over the years,” commented Poole.

“When we started out as Goldfish, people started out coming to our gigs…we used to give people CDRs hand-burned from our computer, handwritten on it was ‘Goldfish’. And the funny thing about it was a guy came up to us the other day and said ‘I’ve still got that CD you gave us!’…Touring is a huge part of what we do. It messes with your mind and your life and the people’s lives around you. So being a musician is not easy or for someone who wants a contained lifestyle. It’s like an emotional roller coaster but you do it because you believe in what you’re doing,” Peters said.

“Our goal has always been to make music, play music and I think spread our music far and wide.”