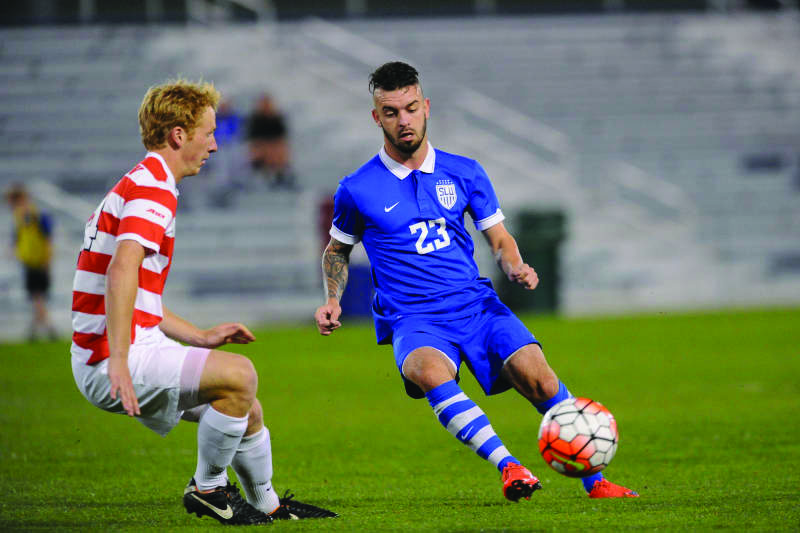 Overtime is a concept that is becoming almost second nature to the men’s soccer team this fall.

Of the men’s 13 games thus far, seven of them have gone into overtime or double overtime.  They are currently 2-3-2 in games that have been forced into extra play.  The most recent was a 2-1 loss in double overtime to Wisconsin, the Billikens final non-conference challenge of the regular season.  SLU now sits at 5-5-2 on the season with four regular season matchups left in their schedule.

SLU traveled to Amherst, Massachusetts, to face the University of Massachusetts on Oct. 10.  Both teams proved relatively even, which was reflected in the result: 0-0 tie in double overtime.  Each squad had 12 shots on goal, but SLU edged Massachusetts with five corner kicks to Massachusetts’ three.  Sophomore midfielder Patrick Sarr made an impression on the game with a high of three shots on goal for the Billikens.

The men returned home on Oct. 14 to host Wisconsin, and they entered into another extra time battle with the Badgers.  SLU lost in the second overtime 2-1 off a corner kick in the 104th minute.  Senior defender Filip Pavisic had the lone goal in the 48th minute when he followed up freshman defender Lennart Hein’s free kick from close range.  Senior forward Faik Hajderovic had a stunning six shots, two of which were on goal.

The Billikens returned to conference play and headed out to the East Coast on Oct. 17 to take on Fordham.  The Rams sat at 3-0-0 going into the game on their home field, but it made no difference to the Billikens.  Relentless pressure up top after a scoreless first half from senior forward Vince Cicciarelli resulted in a look on goal.  Cicciarelli’s shot was deflected off a Fordham defender and went into the back of the net.  It was the only goal the Billikens would need that night as they went on to finish the game and clinch a 1-0 win over the Rams.

SLU’s defense held up their end exceptionally, allowing no shots on goal.  Sophomore goalie Sascha Otte led the backline to victory and a successful shutout, his fourth of the season.

The men welcomed VCU on Oct. 21 to Hermann Stadium to continue conference play.  The Rams also are familiar with overtime as they have a record of 2-0-3 in conference.  They also are one of two teams that haven’t lost a conference game yet, Dayton being the other team in the same position.

The first 40 minutes of play were scoreless, with only two shots on goal apiece.

SLU kept the ball on their attacking half for most of the first period of play, with some of the best chances of the game in favor of the Billikens.  In the 41st minute, Hein took a shot on goal after a scramble off a corner kick to be first on the board and take the lead 1-0.

SLU remained just as dominant offensively in the second half.  In the 56th minute, freshman forward Anthony Brown dribbled down the flank and cut the ball back on a VCU defender.  Brown was clipped at the ankles and drew a penalty kick to give the Billikens a fifth look on goal.  Senior defender Tyler David stepped up to the ball and placed the ball to the VCU goalie’s left side with ease to put SLU up 2-0.

VCU outshot the Billikens overall 7-6, and both teams were granted four corner kicks. Sophomore keeper Sascha Otte recorded two saves. SLU moves to 2-1-2 in the A-10 and 6-5-2 overall.

The Billikens will continue A-10 play on Oct. 24 against Dayton at home.