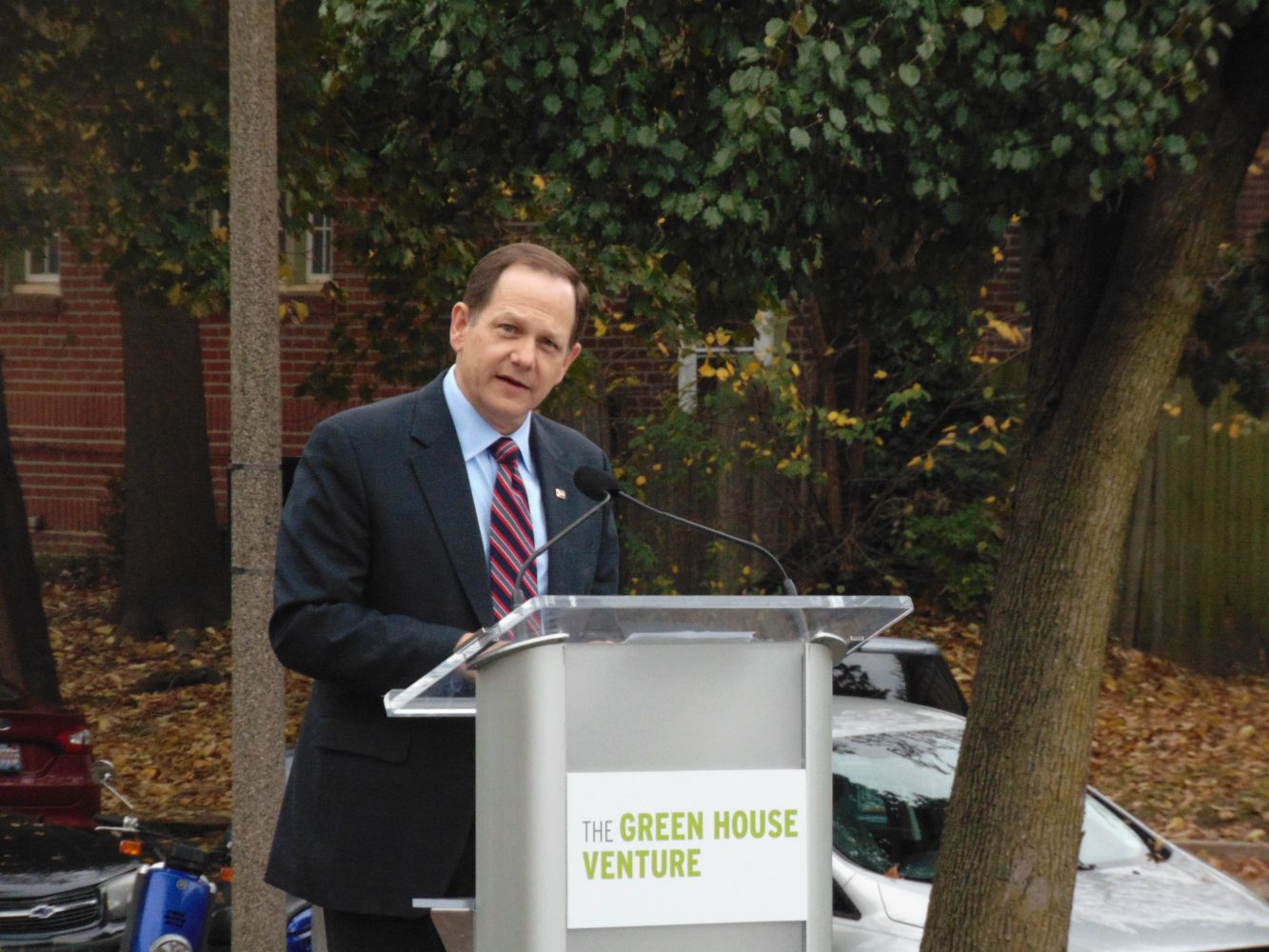 At the corner of De Tonty Avenue and Lawrence Street, in the Shaw Neighborhood, sits an unremarkable-looking patch of empty land.  But in this small field of grass grows visions of sustainability, urban food production and educating children about growing and adapting to the changing environment.

The plans for this vision, a $4 million Nutrition and Science Education Center, were unveiled on Oct. 28 during a press conference.  This vision was started by a non-profit organization known as The Green House Venture.

The project itself has many goals, with the primary objective being supplying a hands-on education for children. For this, the facility will contain a greenhouse, classrooms, an amphitheater, a children’s growing gallery, fish tanks, a food preparation kitchen and a teaching lab.

“The Green House Venture represents a substantial investment in this neighborhood that combines sustainability and science, education and health in a hands-on learning environment,” said Mayor Francis Slay, the first speaker of the press conference. He continued, “[It] is a great example of innovation: fish tanks, a greenhouse, classrooms, a teaching lab; all of the components to draw young people to the marvel of science.”

The students will learn interactively through demonstrations on aquaponic growing techniques, which involve fish breeding, plant fertilization from fish tanks, clay pellet beds and vertical growing. On the outside of the facility, there will be a weather station, an ozone garden, a shade trellis, a climbing fruit garden, a pollinator garden and an aeroponic growth on the roof-top terrace.

Students will also learn about sustainability through the facility’s features, including geo-thermal heating, water conservation, composting and solar panels.

“It’s meant to be not only a kind of neighborhood effort involving schools that are close enough to actually have children to come in for classes once a week … We mean it to be a regional resource. We want schools from all over the region to be able to come in for tours and we have a lot of different things we can teach,” said Dr. Donald Stump, the Vice President of the Green House Venture, and an English professor and Director of the Micah Urban Poverty Program at SLU.

Another way the Venture will reach schools throughout the region and state is through distance learning. The entire facility functions as a broadcast studio with the ability to record and live-stream lessons.

“The whole thing is designed as an educational television studio,” said Stump. “So, if we wanted to do a lesson in the production greenhouse and we wanted to show children how we grow foods in floating rafts, we can actually broadcast from there.”

Stump was one of the original founders of the Venture, which has roots in a separate initiative that began at SLU in 2011.

“There is something at the university called the Urban Project,” said Stump. “It’s just a grassroots collaboration among a lot of departments, centers [and] programs … that have serious commitments to working with people in the neighborhoods around the university.”

The Urban Project at SLU aimed to look forward and anticipate the urban issues that may arise in 2050.

According to Stump, two things will have happened by the mid-century: the world’s population will add roughly 6 billion to 9 and a half billion people and about 75 percent of that population will be living in an urban area.

The group held a series of information sessions and asked the SLU community what projects this interdisciplinary committee should research and pursue together.

The answer of the majority was to build a sustainable greenhouse. Stump applied for a sustainability center grant to design the facility.

Various departments at SLU worked on preliminary plans for the greenhouse, and it was these early drafts and designs that caught the eye of developer, Thomas Purcell, who now serves as president of the Venture.

“He just got interested in this idea and basically one day he said, ‘Would you like to build it?’ and I said ‘you bet,’” Stump recalled, ending his statement with eagerlaughter.

Purcell brought on his own people, who had fundraising backgrounds, and enlisted the St. Louis-based architecture firm, Urban Improvement Construction, which has had a hand in many projects in the area.  From there, the Venture has  shaped into what was unveiled at the press conference.

Stump will continue to develop curriculum for the visiting students, conduct research and produce food. Part of this role is giving back to the community with what the greenhouse produces.

“Food produced by the Venture will be distributed to students in need at eight city schools not too far from SLU,” said Slay. “So this program not only gives to our students, but it also gives back in a tremendous way to the community and helps us prepare for a better future.”

For Stump, the future remains his biggest stump: “Right now, the average bite of food that enters one of our mouths on campus has traveled 1500 miles … x We’re going to have to learn to grow a lot of the food much closer to urban centers, and even in the urban centers.”

The facility is expected to be operating by 2019.