‘Trash Macbeth’ not at all garbage 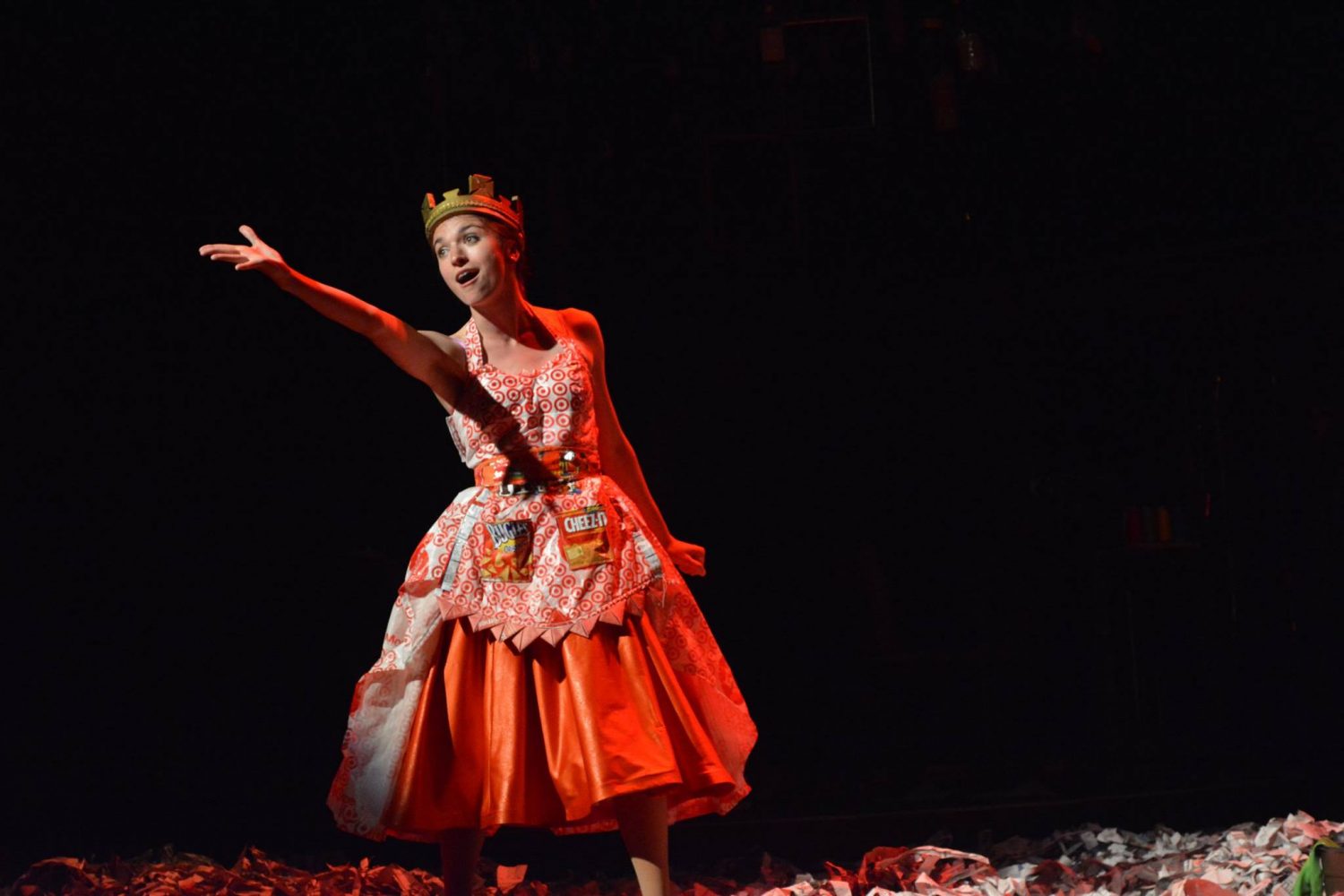 With an entire set devised out of found materials and a script that incorporates 1950’s sewing instructions along with picture vignettes of murdered characters, the company of Saint Louis University Theatre’s “Trash Macbeth” puts on a performance everyone should attend. Director Lucy Cashion writes of the performance, “It is the experience of reading the tragedy [of Macbeth] and then going to sleep and having a dream about it.”

This is a useful description. The set itself is fantastical — with everything from records to picture frames to strange amalgamations of previous theater sets combining to make a sort of tenuous order — truly setting the stage for the dismantling of the script that occurs during the production. Only the scenes essential for developing the character’s motivations are performed in what could be considered regular script, which is then spliced with advertisements, sewing instructions, and other repeated text illuminating the oppressive mental traps the characters find themselves in. This trap is the desire for absolute power from which neither Macbeth nor Lady Macbeth can escape alive.

Anthony Kramer plays a stately Macbeth, shepherding the audience with his expressive acting through Macbeth’s motivational changes, from thirst for power to madness. Alicen Moser portrays Lady Macbeth with an ingenious fury, embodying a character who understands her ability to complete the murderous deeds needed to achieve power, yet is restricted to a directing role due to her gender.

Lady Macbeth asks to overcome the stereotypes of femininity, which she achieves with her declaration of “unsex me here.” Lady Macbeth is the most driven of the characters, allowing no individual or thought of weakness stop her from continuing on the path to make Macbeth king once they have begun. Her absolute motivation drives her to her death quicker than even Macbeth himself, who relapses between the desire for power, empathy and love of his friends that he has murdered, and the madness that ensues from being haunted by those individuals.

The witches, Purvuna Sulaimen, Halli Pattison and Alicen Moser (yes, indeed, she plays both characters!), weave the traps that create the lead character’s tragedy, with both prophesy–the foretelling of Macbeth’s kingship–and of Macduff’s heirs to the same kingship, as well as literally manipulating the characters actions with twine and sewing.  The witches’ integration of the text of Emily Post’s “Etiquette,” Al Gore’s “An Inconvenient Truth,” and the ever-useful Chinese fortune cookie while wearing costumes reminiscent of 1950’s American housewife dresses (also made out of trash, such as target bags or chip bags) lets them at once exist as witches in the play of “Macbeth” and as a timeless force in the world. Demonstrating the unseen forces that can affect individuals’ lives so strongly, the witches are both at once driving forces and unseen.

Interestingly, the show chooses to forego using many scenes of traditional text with the murdered Banquo (Joesph Kercher) or Macduff (Danny Guttas), instead inventing vignette scenes (Banqou: A Still Life and Macduff: A Family Portrait) that give the audience an understanding of the hopes and dreams of these characters without much direct interaction with the Macbeths. These scenes are some of the most poignant of the play, allowing the audience to interact with these characters in a very different manner than a typical “Macbeth” production.

This is, of course, the tragedy that befalls Macbeth: He loses everything—his friends, his wife and his life—in his headstrong rush to gain all power. Although the story is particularly prescient to an individual seeking power, this specific incarnation of the play has a warning for everyone.

With the opening of IKEA and the ensuing crowd of shoppers lining up to purchase cheap furniture, SLU students may not need a reminder that much of society today is built around an obsessive need to consume at all costs. “Macbeth,” and particularly “Trash Macbeth,” gives us all reason to question the fulfillment that comes from this, and to what extent it can metaphorically, if not literally, destroy our communities.