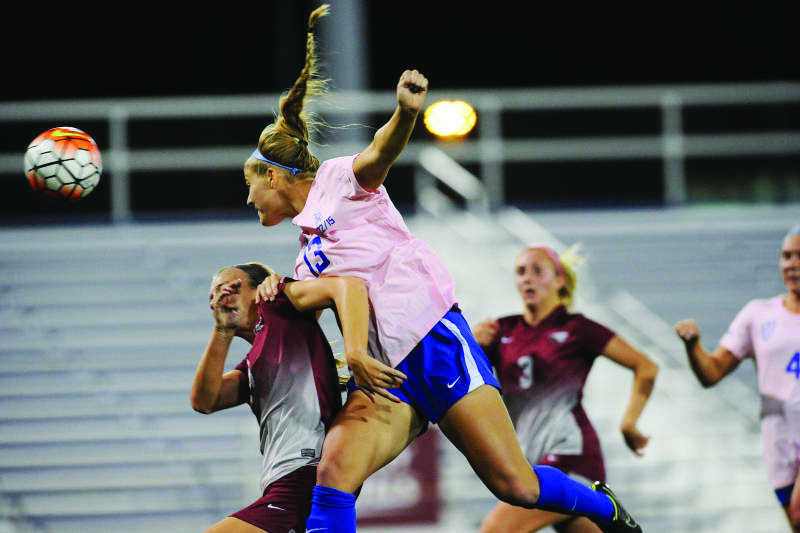 men’s soccer team wore pink jerseys in order to show their support for Breast Cancer Awareness Month while playing Saint Joseph’s at home on Oct. 22. The Bills got on the board first with a header goal from senior forward Livi Logan-Wood in the 24th minute off an assist from freshman defender Carli Bond. Logan-Wood now leads the team in goals with seven for the season. Bond also recorded her first collegiate point. Saint Joseph’s responded with a goal later in the 44th minute. The half ended in a 1-1 tie.

The Billiken offense held strong for most of the second half until the Hawks slipped one past senior goalkeeper Hanna Benben in the 80th minute. SLU could not recover and ultimately lost, 2-1.

SLU out-shot SJU overall 20-12 with 11-20 shots on goal. Junior midfielder Danielle Tolmais led the team with six shots followed by Logan-Wood with four. Ten out of SLU’s 16 games this season have been decided by a goal.

The women’s team played their final regular-season home game on Oct. 25 against La Salle and celebrated the senior players for Senior Day. The Billikens found the back of the net within the first three minutes of the game. Junior midfielder Shaney Sakamoto found Tolmais in the box giving the Billikens a 1-0 advantage. Tolmais has now recorded six goals for the season and currently leads the team in points with 15. Sakamoto recorded her fourth assist for the season, which is the second highest on the team.

SLU’s lead was short lived as La Salle rallied in the seventh minute to even the score. The score would remain 1-1 for the rest of the 90 minutes, sending the game into overtime. Neither team could find an opening in extra time resulting in a 1-1 tie.

The Billikens out-shot La Salle 16-13 overall and Benben made five saves in the 110 minutes. Logan-Wood tied her career high in shots with five, which was the most from either team.

Senior defender Jackie Tondl commented on Senior Day stating, “My last game at Hermann was truly one I will never forget. The underclassmen did an amazing job making it special for all seven of us seniors and really put a lot of time and effort into making sure it would be something we would never forget. Everyone says that four years of playing will fly by, but I never believed it till now. It’s weird to think my last home  game is behind me, but it’s something I’ll cherish forever”.

The result broke the Billiken’s 34 game streak without a tie and results in a record of 8-8-1 overall and 2-5-1 in the Atlantic 10 Conference. SLU will travel to Richmond to take on VCU on Oct. 29 in their second-to-last game.