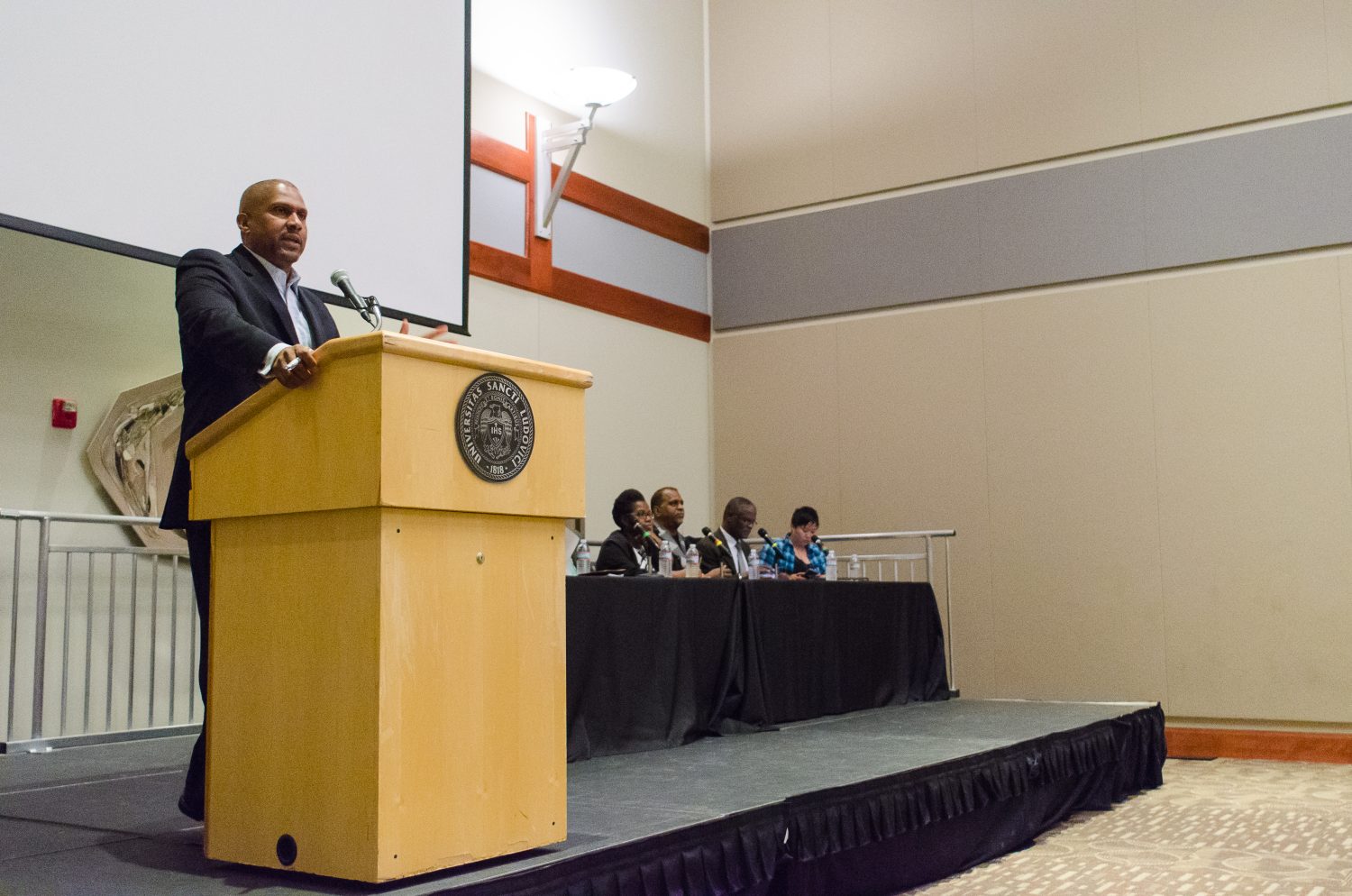 While Smiley acknowledged the breadth of topics he discusses, citing health and financial literacy, he said, “I’m stuck, I can’t seem to get over this issue of poverty.”

“This is part of a national conversation,” he said. The tour meant to provide a “democratic space for conversations about issues that matter in this country [and to] gain traction with influencers and stakeholders.”

He went on to assert: “I believe poverty is the new slavery in this country.”

Frustrated by politicians’ insistence on discussing income inequality as opposed to extreme poverty or economic immobility—in which people lack a springboard to move forward financially—he said, “There’s always going to be income inequality.”

The problem, he explained, is that poverty accompanies other crises: “Poverty, as you know, has so many tentacles.”

For this reason, in Chicago, he addressed poverty and youth crime; in Albuquerque,  poverty and immigration; and here, in a city reeling from last year’s conflicts and protests in Ferguson, race and crime.

Smiley gave the floor to Norman A. White, Ph.D., Associate Professor of Criminology and Criminal Justice at SLU, asking, “What does poverty have to do with it?”

White’s commentary focused on poverty’s sociological foundations, particularly “social challenges that make it difficult for people to live and thrive, that contribute to the trauma of people’s lives,” he said.

He quickly brought up the police—where a “men’s club” mentality collides with a daily stress that begins as they get dressed to go to work. “We have probably the best trained police in the world,” he said. However, insufficient attention is paid to their mental health.

Colonel Jon Belmar, Chief of the St. Louis County Police Department, opened by saying that “Skepticism is probably healthy at some point. When that turns into cynicism, then we have a problem. When we become cynics, then nothing looks good to us anymore.”

Confidence, he believes, plays a formative role in an officer’s career. Officers who ignore the help- and hope-seeking of the communities in which they work, he said, are “looking to lose it from the beginning.”

He pointed out that areas of 40 percent or greater poverty levels have grown by 130 percent. “That’s not sustainable,” he said.

James Clark, Vice President of Community Outreach for Better Family Life, Inc., stressed the importance of jobs and the church within communities, as well as the link between parental neglect and juvenile delinquency.

“The system needs to recalibrate itself to become more compassionate to those systematically stuck at the bottom,” he said. He illustrated poverty’s paradox: “When you have … small pockets of poverty, you know exactly where they are.”

Drawing on her research background, she observed: “We created the poverty conditions that we see.” She gave an emphatic challenge to misconceptions surrounding poverty: “This isn’t someone’s choice.”

“Let us not play down the role of race and poverty,” said columnist Sylvester Brown, Jr. He referenced Ferguson, voicing frustration with the police’s handling of the situation. He said to Belmar, “If you know that that situation emanated from a sense of frustration and poverty, you would have acted differently.”

Julia Ho, an organizer with Missourians Organizing for Reform and Empowerment, expressed her frustration with panels: “I’ve seen so many panels. … Things haven’t really changed.”

She deplored the city’s priorities, citing the contested plans for a new football stadium. “If black lives matter, then our resources should reflect that,” she said.

She brought the tensions against Chief Belmar to a head, advising that he resign following his handling of Ferguson and criticizing his absence from a public accountability meeting, failing to say “one goddamn word” explaining his actions.

Smiley interjected and warned that he would cut her microphone if she used profanity again, demanding “dignified” responses for all opinions expressed.

“Your ZIP code identifies your trajectory through life,” he said, evoking that ubiquitous St. Louis question: “Where did you go to high school?”

He delved further into St. Louis’s geography of poverty, recalling people who advised him, upon moving to the area, to stay west of Highway 270 and south of Interstate 64. “This is one of the most disgustingly segregated places in the country,” he said.

He outlined a degenerative cycle of poverty, ill health, unemployment and poverty, which contributes to institutionalized racism.

He said, “If you live in this region, you’d better be concerned about this issue.”

Smiley seemed genuinely impressed: “I’ve never been in one of these conversations where so much truth has been told.”

Following questions from the audience, I asked Smiley  about his role as an intermediary in potentially tense conversations.

“You have to be a generous listener, a charitable listener. I’ve learned that if you listen well, the conversation will direct you where to go.

“Moderators tend to think they’re leading the conversation … You’re not leading, in fact, if you’re doing it right, you’re following. Because if you listen to what the person is saying, they will tell you where the conversation ought to go.”

“I’ve found that tension is good for conversation … I can tell you one thing, nobody fell asleep in there tonight.”