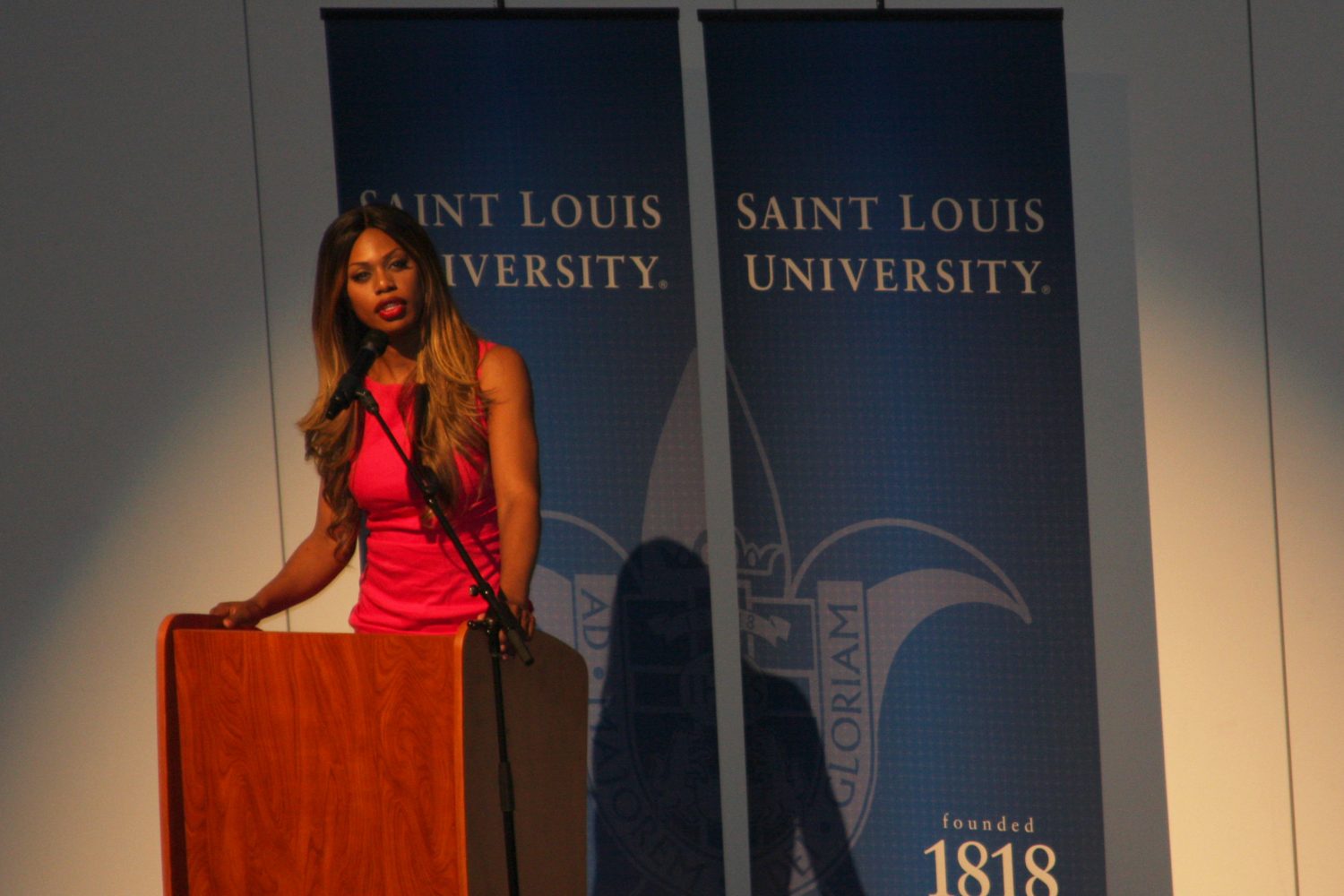 “Ain’t I a woman?” The words bounced around the walls of the Center for Global Citizenship during a speech given by the Emmy-nominated actress Laverne Cox last Monday, Nov. 9.  Cox delivered a speech hitting on the idea of intersectionality — the cross sections of identities, normally focused on in discussions of minority groups.  She spoke on her own personal story as a black, transgender woman from a working class background in Mobile, Alabama.

The actress, made famous for her role as Sophia Burset in the hit Netflix original “Orange is the New Black,” was the first trans woman of color to hold a leading role in any mainstream show as well as the first to produce her own television show, VH1’s TRANSform Me.

Along with her successes in the world of media, Cox’s role as an activist has been incredibly important to the trans community.  Her voice has been a large one in improving the way trans* people — especially trans women of color (22 trans women of color have been murdered this year alone) — are seen in America.

Laverne Cox has used her position of fame to bring to light the stories of other transgender women and to talk about the cross-sections of identities in regards to race as well.  Oftentimes, the face of LGBTQ movements has been stereotypically white (Ellen DeGeneres, Harvey Milk, and Caitlyn Jenner), while important people of color, like Sylvia Rivera and Bayard Rustin, have often been erased from history.

Cox, during her speech, mentioned that every one of her identities intersect in her life and she cannot remove any one of them from who she is.  She talked about her experience growing up in a predominantly black area; where her queer identity at the time and the dysphoria she often felt led to her face bullying and violence from those she interacted with.  When she left her hometown for art school, she was then exposed to hatred of a racial variety.  Her story includes struggles from multiple, difficult angles; but through it all, she stuck to her values and beat the odds to become the icon she is today.

Currently, Laverne Cox is working on bringing to the public eye the case of one CeCe McDonald.  Cox is producing a documentary titled Free CeCe that will focus on this black, transgender woman’s incarceration in a men’s prison following a charge of second degree manslaughter, which happened after an incident where McDonald was violently assaulted due to her race and gender identity.

Her final message for the audience was that they should not concern themselves with the way society tries to impose itself upon them — we can all be beautiful people and one should do what makes him or her comfortable and happy.

Cox encouraged the use of the hashtag #TransIsBeautiful, a statement she said is both pro-trans identifying people as well as a way that cisgendered people — those that identify with the gender they were assigned at birth — can praise the ways they might not fit cleanly within the gender binary and live more authentically.

After Cox’s speech, individuals were given the opportunity to meet with the television star.  Many people thanked her for what she has done within the LGBTQ community as well as the Black community.

One transgender individual took the chance to tell Laverne Cox how she had helped her by being a role model.  To this, Cox simply said, “I’m just a person,” and proceeded to compliment every single person that went to take a picture with her.

Laverne Cox’s newest role will be appearing as Dr. Frank-N-Furter in the remake of the cult classic Rocky Horror Picture Show.