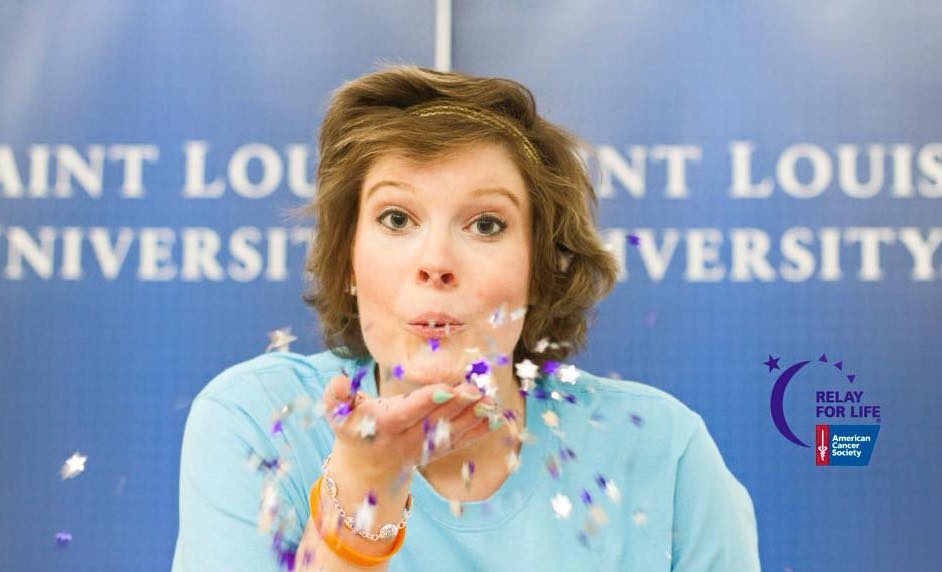 For the third year, a salute of sisterhood with survivor, deceased

On Sunday Dec. 6, SLU’s Kappa Delta chapter will hold Kuts for Confidence (K4C) for the third year in a row. The day-long event is a drive in which students can donate eight or more inches of hair to be used to manufacture wigs for cancer patients who have lost their hair during treatment.

K4C, a fundraising force and a vehicle for advocacy, has its roots in a series of cancer diagnoses that have shocked but ultimately strengthened a close-knit Greek Community. Kappa Delta created the event in response to senior Emily Evans’s return to SLU, in January 2013, following her osteosarcoma diagnosis the previous year. This year’s drive will be held in honor of Kappa Delta member, Sarah Wieglos, and Gamma Phi Beta member, Grace Oliver, who both passed away earlier this year from cancer.

Emilia Homan and Claire Fenske take the helm as co-chairs on this year’s organizing committee. Homan was a freshman when Wieglos was diagnosed.

“It was really freaky for me, my freshman year, to learn that two girls in this organization had just been affected so directly by cancer,” Homan said. “That in such a small group, two people could be so in danger of this disease.”

Two girls in her Occupational Therapy Program are Wieglos’s littles.  The girls were paired with her while she was at Loyola Medical Center seeking treatment — they met her through FaceTime.

“I saw the most loss [and] stress within them, because they were close to her at that time,” said Homan.

When Wieglos passed away, her sorority sisters held a ceremony and wore purple in her honor. Wieglos had been involved in Relay for Life, another SLU fundraising event devoted to cancer patients.

“The fact that we have had two sorority sisters battle cancer within the past five years has been devastating for our chapter,” said Fenske. “With that said, we have learned to lean on each other and trust each other through thick and thin. The cancer that has affected our two sisters has undoubtedly made our chapter stronger because we have had to rely on one another for emotional support during the tough times.”

Nationally, sororities undertake philanthropic projects over the course of the year. For Kappa Delta, these include International Girls Day in the fall and work for Prevent Child Abuse America in the spring. K4C takes place independently of these. The Kappa Delta magazine has highlighted the event, and chapters nationwide have reached out to previous chairs, hoping to organize similar events on their campuses.

Kappa Delta sends hair donations to Pantene Beautiful Lengths, whose partnership with the American Cancer Society allows them to manufacture and distribute wigs to cancer patients free of charge.

Other organizations, such as Look Good Feel Better — which receives funds raised by K4C — has to sell the wigs because they aren’t partnered with ACS. LGFB is part of the nonprofit Personal Care Products Council Foundation, promoting confidence and self-esteem in women who are battling cancer’s residual effects – in this case, hair loss.

Homan quoted a LGFB representative, saying, “You already know the link between confidence and wellness. Confidence could give someone the strength to fight back and give all their energy to their cancer treatment.”

One of Homan’s co-workers — who went to SLU — said that losing her hair “was one of the hardest changes to deal with” during her treatment and recovery.

This year, Kappa Delta will implement “Beards and Buns,” a contest in which students vote, with donations, for a male student with the best facial hair or man bun. “Men encounter the same kind of presence of cancer in their lives, so they should be involved,” said Homan. All proceeds will go to LGFB.

In addition, Kappa Delta launched a GoFundMe campaign online and sent letters to friends and family — raising almost $9,000, with a $12,000 goal. They hope a profit share with Snarf’s Sandwiches will draw more funding.

“People really will give,” Homan remarked. “You just have to ask them.”

Emily Evans, who joined Kappa Delta as a freshman in the fall of 2011, kept in touch with both Wieglos and Oliver during their two-and-a-half- and three-year cancer fights. She was still in chemotherapy when Sarah reached out to her.

“I was the first person she told and she asked for some advice on how to begin this whole process,” said Evans. Oliver later reached out to her, too.

“The cancer world is so big, yet so small,” said Evans, “and finding people in similar situations that you could relate to was the best kind of medicine.”

With her cancer in remission, she remains active in Kappa Delta, but questions remain from that period of her life.

“I don’t think I will ever understand any of the ‘why’ questions when it comes to cancer,” she said. “When I would talk to my friends back home and at the hospital, people could not believe what our community was going through. I mean really, two girls in the same grade and the same sorority being diagnosed within 6 months of each other? What are the chances? I will forever say that it is so much easier to be the patient than to be family and friends just watching someone go through cancer.”

Senior Anna Cirone said, “Sarah had the type of rock-solid faith that most people only dream about having, and found an immense joy in serving others. Nothing, not even leukemia, could keep her from being the passionate and confident Sarah we all knew and loved.”

“As everyone that knew Grace could attest, she had the world’s greatest sense of humor. Grace was the type of person everyone wanted to be around, because she could find a way to turn the worst day into an adventure. Rather than sulk about her prognosis, she traveled the world and showed all of us what living life to the fullest really looks like.”

“Aside from growing each year in terms of hair cut and money donated, I think that our passion has grown,” said senior Lizzie Fenske, co-founder of K4C. “We had so much excitement going into the first year, and now, on our third year, we go in with more of a mission to help those struggling. With the loss of two girls it has become even more personal for each chapter member.”