Pizzeoli: Pizza from a pro 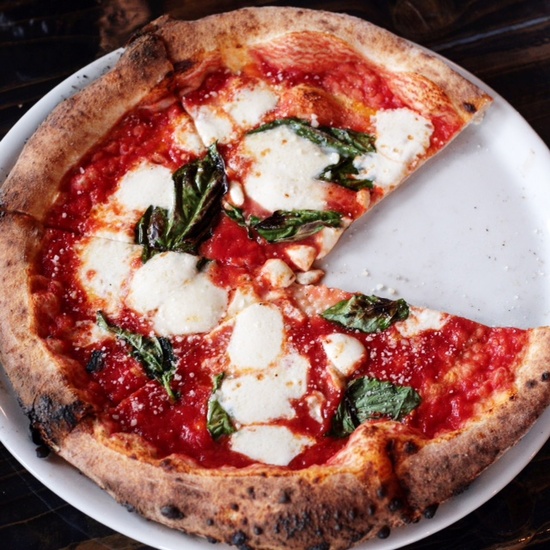 After gaining experience as a baker, Scott Sandler became inspired to open his own pizza place, Pizzeoli. Opening in October of 2014, the wood-fire, Napoletana-style pizza has been delighting customers at the corner of S. 12th Street and Allen Avenue. Unless you have spent time in Italy, like the owner, you probably have not had pizza quite like this.
What makes Pizzeoli, and Napoletana pizza in general, unique is the dome style of the oven it is cooked in, for just 60 to 90 seconds at 800 to 900 degrees. Finely milled flour, known as 00 flour, creates a dough that is especially soft, often requiring a knife and fork to eat it. The house-made mozzarella provides the finishing touch to most pizzas, which, in order to be authentically Napoletana, can only be of three varieties, margherita, marinara or margherita extra.
In addition to his time spent studying the pizza culture in Italy this past September, Sandler also spent one week in Los Angeles training with the Associazione Verace Pizza Napoletana, or AVPN: the teaching, training and regulating arm of Napoletana bakers, which has headquarters in Naples, Italy. In true Italian fashion, most customers at Pizzeoli order and eat their own pizzas. Each pizza is made and cooked by Sandler himself, who considers what he does now as his calling and mission, seeking to give customers an authentic experience. He feels called to serve people and uses food to do so.
From his position behind the counter, directly in front of the oven, Sandler can see just about every customer at the restaurant, creating an intimacy between cook and customer that rivals that of grandma’s house. Sandler loves the essential nature of food, saying “food is primal” and “food is life.”
Sandler’s sense of mission goes beyond just offering great customer service. A firm believer in and a follower of Indian philosophy, Sandler felt that being a vegetarian would be a must —not just for himself, but for his restaurant as well. Diners may not even notice that all of the pizza offerings at Pizzeoli are vegetarian because of the variety and tastiness offered. Although the margherita pizza is the cheapest and best seller at the restaurant, also offered are unique combinations like the Funghi, which features three varieties of mushrooms: crimini, shiitake and yellow trumpet. The Soulard is another favorite, which is topped with vegan sausage and chili flakes.
Occasionally, but not often, customers will leave once they realize that meat is not offered as a topping. Sandler compared eating meat to a philosophical experience of merging with an animal, including the fear, anxiety, stress and even disease that it may have experienced prior to its killing. To eat meat, then, is to consume violence.
A small shelf in the restaurant features a painting of Indian spiritual master Sai Baba, as well as a statue of Ganesha, known as the remover of obstacles. Ganesha is featured as having an elephant head, with its big ears signifying that this deity hears everything. Also featured on the statue is its trunk, which is meant to symbolize discernment, able to both pick up a peanut and uproot an entire tree. Elephants, fittingly, are also vegetarians.
Pizzeoli is closed Sundays and Mondays, but open for both lunch and dinner on all others days of the week. Although the restaurant does not offer delivery, Postmates offers a delivery service for a fee. So whether you head into the restaurant or have Postmates deliver, get ready to enjoy a pizza experience that you will not soon forget.