‘ONCE’ again at the Fox 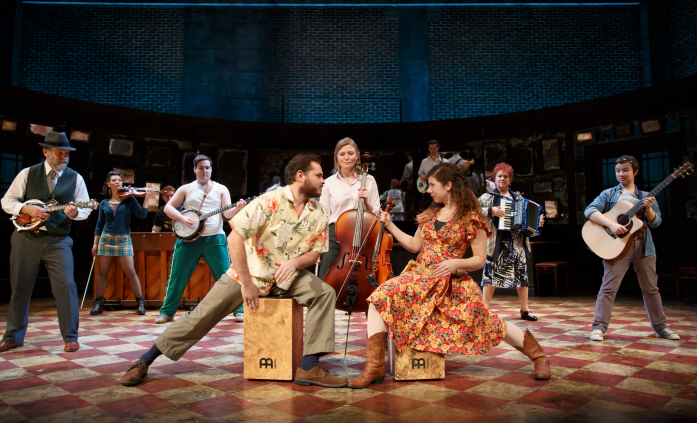 Back in 2007, director John Carney released a tiny film called “ONCE,” a movie shot in only 17 days with nearly no budget and unestablished actors. Despite all odds, “ONCE” went on to be a huge Academy Award-winning success.

The simple yet compelling story, paired with an amazing soundtrack of original songs written by the leads, Glen Hansard and Marketa Irglova, resulted in high praise from stars like Steven Spielberg and Bob Dylan.

When news broke that “ONCE” was being adapted for Broadway, many held their breath in fear that putting such a delicate story on a huge stage would strip away its magic. However, yet again “ONCE” soared past expectations and went on to win eight Tony Awards in 2012 including Best Musical, proving that whether on a tiny screen or a big theatre, the story and music of “ONCE” can’t be ignored.

“ONCE” follows the story of Guy, an Irish musician who is stuck in life, who meets Girl, a Czech piano player dealing with a complicated family life. They decide to make music together, and their collaboration leads towards beautiful songs and a complicated relationship.

Since the film version of “ONCE” isn’t your typical dance-and-sing type musical, this called for an interesting adaptation in order to take a simple film from screen to stage. To keep the authentic band vibe from the film, “ONCE” requires every cast member to play an instrument.

From acoustic guitar to harmonica to banjo to mandolin, the musical features almost 20 different types of instruments on stage. Swing and music captain Barry DeBois says: “It’s not like other musicals where there’s an orchestra that plays the exact same thing every night. Our show is very much more like a band. That makes my job much more interesting.”

As music captain, DeBois is in charge of “keeping the integrity of the music while on tour.” One of his most important tasks is leading the pre-show jam session that occurs on stage. Yes, that is right, a pre-show jam. In order to really bring home the gritty pub-playing band feeling that fuels the film, the “ONCE” company plays a variety of traditional Irish and Czech songs onstage before the start of the show. The audience is invited up to the stage to get a drink at the bar — which is in fact a full-working bar and not just a prop — and hang around while the cast jams out to a variety of different songs chosen each night by DeBois.

Although you think these pre-show jams would be the music captain’s favorite part, DeBois looks forward to the more intimate moments: “I thought going into the show that my favorite part would be rocking out to the music, but to be honest the moments that I love the most are the really real intimate moments that we get to do, whether its Guy and Da or Guy and Girl. The way this show is written is very natural, the conversations people have, it can pivot from silly to heartfelt, even if its in a couple of lines, and it works. That’s what I really look forward to.”

DeBois and the rest of the cast have worked hard to make sure the show gets its simple and compelling message across: “It’s a very real human story that I feel like most people can relate to. It’s about complicated relationships. Relationships are complicated and not always Cinderella stories. Te show leans into the reality of life in its storytelling and in its music. So, I’ve never known anyone to come to this show and leave unmoved.”

“ONCE” will play this weekend for a limited engagement from Sept. 30-Oct 2 at The Fabulous Fox Teatre.