Wins coming in for women’s soccer 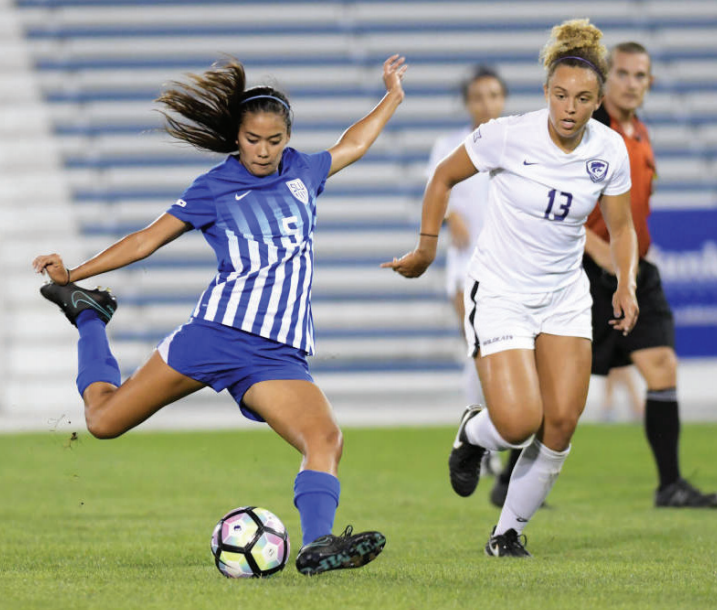 Women’s soccer dominated SIUE in a contest at Hermann Stadium on Sunday, Sept. 11 by a score of 4-1. As it was the 15th anniversary of the 9/11 tragedy, the team decided to designate the game as “Salute to Service Day.” Members of the armed forces entered the stadium for free and were presented with soccer scarves at halftime in appreciation of their service to the country. Parks Guard also was in attendance and presented the nation’s colors during the national anthem.

With this win, the Billikens are tied with the Fall 2000 team for the best sevengame start in team history. Sophomore Karley Kucera, a midfielder who is currently injured, attributes this success to hard work: “We have put in so much work since last spring season and it is so exciting seeing it all pay off.” Kucera also thinks the team is looking strong heading into conference play.

“Our team has an incredible bond and dynamic on and off the field which helps us enjoy being around each other so often and strengthens our chemistry on the field.” On the field, Kucera says the group plays as a team and “everyone has their own role for the team to make it all run smoothly and work efficiently.” Looking ahead, Kucera is excited to see what happens: “We’re excited to keep working even harder to keep our success going.”

The Billikens play next at Southern Methodist in Dallas with a 6:30 p.m. kickoff on Friday and return to Hermann Stadium on Sept. 20 to face Murray State. Kickoff at Hermann is set for 4:30 p.m., with the revealing of the new mascot and men’s soccer vs. Louisville to follow.

After an eight-day hiatus, the women will begin conference play against conference-rival Dayton. They travel to Ohio on Sept. 29 to face the Flyers, who were picked to win the conference this year.