Field hockey falters against A-10 foes 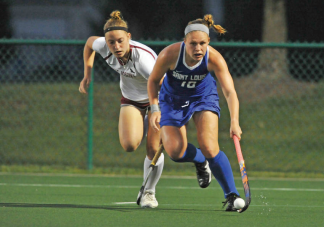 The field hockey squad dropped to 1-8 on the year and 0-2 in Atlantic 10 Conference play after two weekend matches against Saint Joseph’s and Pacific. The Billikens hosted Saint Joseph’s on Sept. 23, a match that turned out to be a 7-0 loss for the home squad. SLU held the Hawks to a 2-0 lead in the first half and fired three shots to generate some quality chances, but ultimately succumbed to an especially strong performance in the second half. The Hawks found their groove in the second half by putting 5 of their 15 shots in the back of the net to take the victory. Senior back Maya Bentley, junior midfielder Morgan Crowe, sophomore midfielder Molly Feid and junior midfielder Katie Moss all recorded shots for the Billikens. Sophomore goalie Jessie Bryan had a career night with a high of 12 saves. The Billikens traveled to Springfield, Mo. on Sept. 25 for a game against Pacific at a neutral site. SLU dropped the decision, 11-3, against the Powercats. SLU put eight shots on the board, five of which were on frame. Pacific found the back of the net first with a shot from the left side. However, Feid answered within twenty seconds with a shot from the left side as well. Te goal brought SLU level, but the lead would only last a few minutes as Saint Joseph’s continued to turn up the torque. The Powercats drew ahead yet again in the 8th minute with a 10-yard finish. Feid found a way to the net once again by collecting a rebound from sophomore forward Amanda Clark’s shot. The Billikens went through a bit of a lapse in the remainder of the first half, allowing the Powercats to take the lead, 6-2. In the second half, the Bills could not find the goal until the 59th minute of play, when sophomore mid- fielder Carly Kissinger put in a rebound from a teammate’s shot on goal. However, Pacific still came away with the victory, 11-3. Feid earned her first multi-goal performance of the year as she put both of her shots on goal in the back of the net. Bryan collected 16 saves, the second-highest single-match total in SLU history and third best single-match total in the NCAA this season. SLU faces conference foe Lock Haven on Oct. 2 in Lock Haven, Pa. Start time is scheduled for 10 a.m. Te Billikens will attempt to arrest their losing streak with a positive conference result.