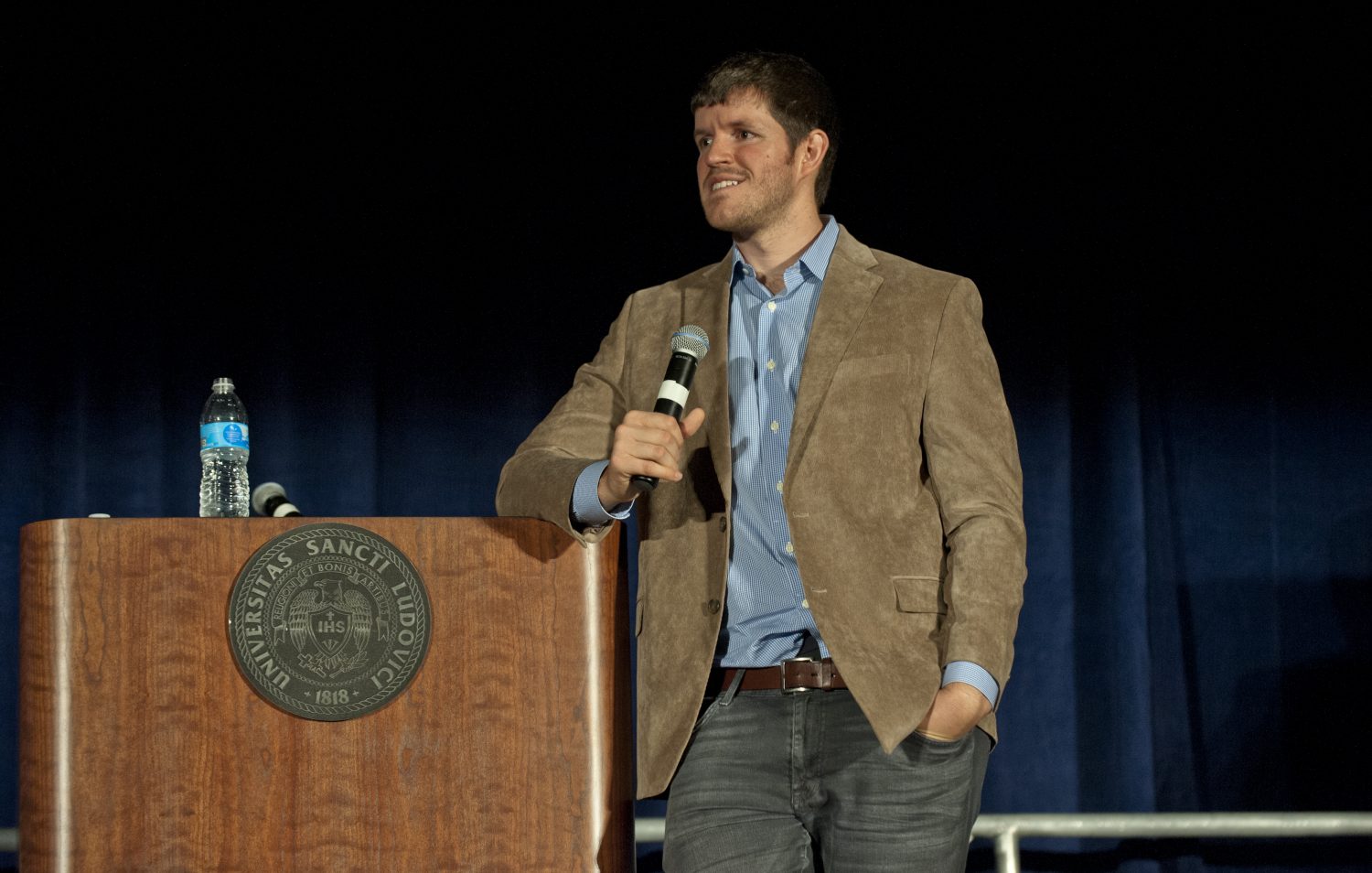 For Brandon Stanton, it all goes back to a bad photo of a green lady.

“There was a time when I photographed a woman and she was dressed in all green,” he said. “And it wasn’t a good photo.”

His subject, an elderly lady, is eye-catching, to say the least. She was, in fact, clad entirely in bright green: jacket, leggings, scarf, gloves. Even her hair was dyed to match.

Still, he knew that this particular portrait was not his best work. “She’s off in the corner, it’s kind of awkward,” he said. “I remember being disappointed after I took it.”

At the time, Stanton had recently lost job as a bond trader in Chicago. “That was surprisingly a good day,” he told the audience in a packed Wool Ballroom. “I started thinking about what it was that I would do with my time if prestige didn’t matter, if money didn’t matter and I could just choose what I wanted to do.”

So that’s what he did. Stanton made the decision to move to New York and become a photographer — a bold move, considering he had previously never picked up a camera in his life. He began working on a project, which he called a “photographic census.” The idea was that every day, he would go out and take photos of random New Yorkers off the street.

The photo of the “green lady” was never intended to make it to his blog. But the following day Stanton was bedridden with the flu and had no choice but to post it on Facebook anyways. On a whim, he decided to include a snippet of his conversation with the subject — something he hadn’t done before. “She said to me, ‘I used to be a different color every day. But then one day I was green, and that was a good day. So now I’ve been green for 15 years.’”

The photo was a turning point for Stanton. It was the first time he had posted a quote along with a photo, and people seemed to be responding well to it. In terms of Facebook “likes,” it outperformed all of his previous posts (relatively speaking, of course — on a page with 2,000 followers, it had “maybe 65 likes or so”).

But more importantly, it changed the entire nature of his project. For the first time, he realized that what people were responding to were stories, not photos. “That was the moment I realized that there was something to learning about these people. That’s what was really interesting to people.”

With its newfound focus, his blog, called “Humans of New York,” quickly began to find a following. He continued to post photos of the people he encountered, but he began to interview them as well, sharing select quotes and stories from his interactions with them.

Stanton’s subjects include all types of people, from immigrants to homeless people, ordinary working people to some of New York’s most eccentric residents. Their stories are equally diverse: some heartwarming, some funny and some sad. But nearly all of them display a surprising level of honesty.

His interviews often last up to an hour or more. What has been most surprising was people’s willingness to open up to him.

“When you’re in a hour-long conversation with people, even if you had something you were planning to say, that’s used up in two minutes,” he said. “During that conversation, there are some very quiet, unexpected, genuine moments. Sometimes the person is thinking about things they never thought about before, never had to think about before, or haven’t thought about in a long time.”

Today, just six years since it first began, “Humans of New York,” has amassed over 20 million followers across its various social media platforms, with fans from around the globe.

Stanton has become a virtual celebrity himself; he has interviewed Syrian refugees, Hilary Clinton, even President Obama. Stanton noted that his blog has become especially popular in places like Pakistan and Iran — countries that he says have gotten a particularly negative reputation in the media.

Though he says fans sometimes do recognize him on the street, Stanton says his newfound fame hasn’t changed his methods or prevented people from being authentic and genuine. In fact, he said, “I find that the page’s notoriety allows me to interview people that would have otherwise said no before, because they’ve heard of ‘Humans of New York.’”

His popularity has also granted him more artistic freedom as well. No longer as dependent on likes and shares as he once was, Stanton will sometimes take a few weeks to focus on “heavier” material. For example, in his most recent photo series, Stanton focused on veterans suffering from PTSD. “You can actually feel the audience pulling back from it, in the numbers. You can see the ‘likes’ going down.”

Above all, Stanton stressed the importance of doing something you love. “I get to wake up every morning and chose the work I want to do that day.” But he made a special point to emphasize the word “work.” “You know how many people thought this was going to be a good idea? Nobody,” he said. “If I had just waited for the idea of Humans of New York to become ‘Humans of New York,’ it never would have happened.”