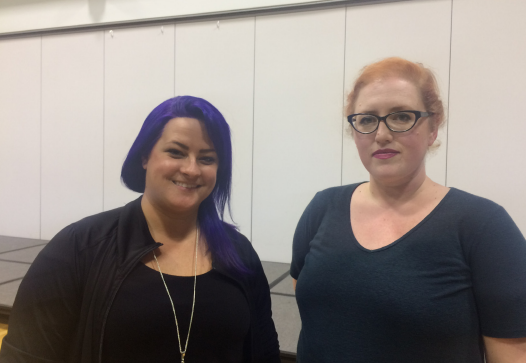 Pro-life and feminist: lately, these two words seem inherently opposed to each other.

On Monday night in the Center for Global Citizenship, New Wave Feminists Destiny Delarosa and Kristen Walker Hatten came to SLU to argue against that very idea. The two women identify as both feminists and as pro-life activists.

“We try to make our protection of life all-around,” Daly said. “We take a stance against all attacks on life – especially on abortion, the death penalty, physician-assisted suicide or euthanasia, poverty and violence. If we say we’re pro-life then we have to be for the whole human person throughout the entire life span. We try to be a very compassionate base rather than just shouting ‘This is right!’”

“We’re trying to rebrand the movement,” Delarosa said. “It has to become a movement that is woman-centered. It has to become about empowering women. That’s how we’re going to stop abortion. The pro-choice side is all about saying ‘You can’t do this. You’re not strong enough,’ and the pro-life side needs to become more about ‘You can do this, you are absolutely strong enough, and we will be there to help you help yourself. We want to spread this message of courage, of being a hero. Maybe you didn’t plan this pregnancy, but you have a chance to save a life now.”

The two shared their personal testimonies about what led them to become pro-life activists.

Delarosa was the child of an accidental pregnancy and is the mother of a son born under those circumstances as well. Hatten spoke of her extremely pro-choice leaning views in the past and how a close friend of hers changed her own views on the matter and altered Hatten’s own thoughts on abortion through thoughtful discussion of ethics and medical science rather than by religious attack.

Daly agreed and spoke of her desire to see a change in the way people view the relationship of the fetus to the body of the mother.

Delarosa and Hatten said that they have faced minimal opposition for their stance. They have never had a protestor at one of their events. According to Hatten, most people have been happy to hear a fresh perspective that takes social justice and feminism into account.

Not all students were convinced, however. “On a personal point, because of religion, I am pro-life, [but] I do not believe there are sustainable arguments for policy,” said attendee Daniela Feliciano.

Feliciano also said that she felt the presentation was not intersectional and came across as one-dimensional. “The speaker had a slut-shaming approach to pro-life which I do not agree with,” Feliciano said.

During the presentation, Hatten and Delarosa challenged the idea that powerful female icons such as Beyoncé do more harm than good by emphasizing their sexuality as part of what makes them valuable.

Hatten and Delarosa plan on attending the March for Life this January and said they would be live on social media for anyone interested in following them.