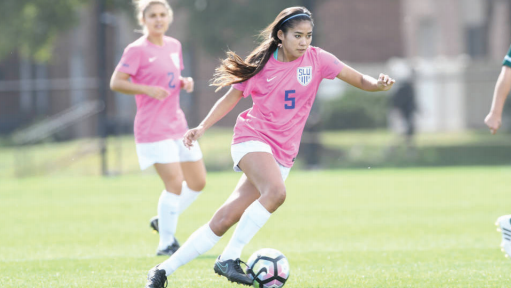 SLU women’s soccer’s outstanding run this season finally hit a speed bump, as the Billikens fell in a close battle to conference leaders Saint Joseph’s, and then only barely hung on to a scoreless draw against the La Salle Explorers.

The Saint Louis women traveled to Philadelphia’s Sweeney Field in good spirits, having been on a winning streak previously. However, the battle between two first-place teams went to the Hawks instead of the Billikens.

SLU was disappointed with the result, as the game was very even and closely fought. However, Saint Joseph’s stronger finishing proved to make the difference in the match. SLU led in corner kicks, 9-2, but shots were even at 10 apiece.

The loss to the Hawks snapped the Billikens fivegame winning streak and seven-game unbeaten streak.

SLU then made a short trip across Philadelphia to visit La Salle at McCarthy Stadium. After a 0-0 tie with the Explorers, the Billikens moved to 12-3-2 overall and 5-1-2 in the A-10.

Two conference games are left for SLU, and the Billikens find themselves in third place with 17 points. Tey only trail Saint Joseph’s 22 points and George Mason’s 18 points.

Against La Salle, SLU struggled to get their offense going, managing only six shots total compared to La Salle’s 12 shots. La Salle’s goalkeeper was also not forced to make a save all game. While the Billikens struggled to find a second gear, there were some strong individual performances.

Junior goalkeeper Mary Niehaus and the Billikens recorded their ninth shutout of the season. Niehaus was one of the reasons that SLU was able to stay in the game, as she made four saves, with three coming in the second half.

SLU must also be commended for their clean approach to the game. Despite having played 17 matches this season, the team still has yet to record a single yellow or red card. SLU’s lack of cautions is quite rare. So far this season in the NCAA, only eight teams do not have a caution to their name. SLU is also the only A-10 team left without a yellow or red card.

Next up for the Billikens will be a home matchup against the VCU Rams on Tursday, Oct. 27, at 7 p.m. The Rams will visit Hermann Stadium and SLU will hope for a victory to keep pace with the first and secondplaced Saint Joseph’s and George Mason.

Any change in the standings at the top will result in changes in seeding for the A-10 postseason tournament, which will take place starting on Tursday, Nov. 3 and will continue until Sunday, Nov. 6. The women could land anywhere from the first seed to the sixth seed in the tournament.

Rhode Island will be hosting the championship. All eight teams that qualify will play on Tursday, followed by the semi-finals on Saturday, and the final game on Sunday