Slinkys and Barbies and Jenga, oh my! 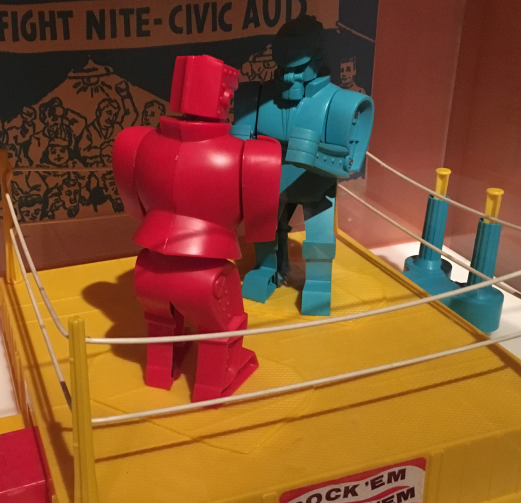 This weekend, the Missouri History Museum opened a new exhibit: “Toys of the ‘50s, ‘60s and ‘70s.” It will be on display until Jan. 22, 2017. Open through the holidays, this exhibit is a must-see with friends and family.

At the member premiere, a curator of the Museum and content leader of the “Toys” exhibit described it as “the perfect blend between nostalgia and reminiscence.” There are toys that several generations will recognize and recall playing with either in their own home or at their grandparents’ house. Featuring Slinky, Barbie, Hot Wheels and many others, the exhibit is almost a game in and of itself. At the premiere, several people perused the display cases counting aloud how many toys they played with in their childhood.

The exhibit was developed by the Minnesota History Center and set up in a trilogy of living rooms. Each room is modeled after a dollhouse of the decade and has a distinct theme: the’ ‘50s is the West, ‘60s is space and ‘70s is Star Wars. There are also predominant themes through different cases, such as playing grown-up, dolls and educational toys through the decades. On each of the case descriptions, a personal anecdote about the decade, theme or toy is shared. Those stories provide a sense of realness and longing for the past that a historical exhibit can sometimes fail to invoke.

Not only were the toys available for viewing, there were several opportunities to actually use them. There were stairs to race Slinkys down, a garage to throw Nerf Balls in and a whole table devoted to toys such as Barrel of Monkeys and Jenga.

Normally a history exhibit does not lend itself to random conversations, but this exhibit breaks the mold. Each toy gives viewers a new topic of discussion: exclamations such as “I forgot about this!” or “Do you remember playing this?” were common at the premiere. Each person had a story or experience to share — many laughed as they passed the lawn-game Jarts display and made quips about still being alive even though the game was banned because of the dangerous metal darts. One man described how a Slinky used to have bare-metal ends and how they would get caught in his sister’s hair easily.

Since three decades are in one exhibit, it is easy to see trends. Barbie dolls first appeared more accurate to body size, but gradually became smaller and unrealistic. Tere are also trends of toys not changing whatsoever. Rock ‘Em Sock ‘Em Robots and Lincoln Logs are just two examples of many toys consumers still purchase and enjoy today.

Display cases sometimes brought up questions for debate. Are Hot Wheels or Matchbox cars better? Is a G.I. Joe a doll or an action figure? The exhibit interacts with viewers on a personal level.

Baby Boomers can feel at home in the living room setting, watching toy commercials on the TV. Millennials can often remember getting hand-me-downs, playing in their grandparents’ living rooms or playing with a newer version of many of the toys. In any case, the exhibit can be enjoyed regardless of age.

Perfect for the holidays, families or friends can go see the exhibit and be reminded of their past and even hear new stories about toys they might not have seen. Truly nostalgic, “Toys of the ‘50s, ‘60s and ‘70s” gives a history lesson with a new spin.

History is not learned only through the descriptions in the exhibit, but also by attending the exhibit itself. Paired with the visual masterpiece of the displays, listening to stories from people of all different backgrounds is the real experience.