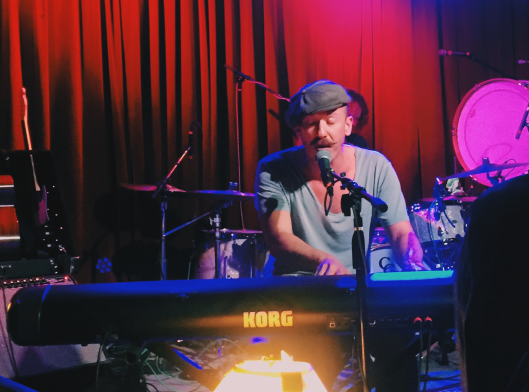 The evening started off with Sensor. First hearing Sensor’s voice, the crowd was taken aback. Sensor’s singing is anything but soft and quiet. He has a croon that is loud, scratchy and beyond his 22 years. The Killers’ Dave Keuning discovered Sensor in the musician’s hometown of Pella, Iowa. Soon after, Sensor signed to Jagjaguwa, the same record label home to indie legend Bon Iver.

Sensor’s persona and voice together will remind you of both Bob Dylan and The Tallest Man on Earth, two musicians with very distinct voices. Sensor owned the stage, playing a set built of unreleased songs. Sensor’s small talk with the audience showed off his quirky personality. Sensor even joked about one of his songs being a country track because it was sad, and he wrote it when he was drunk.

Sensor’s best performance was of his song, “The Reaper Man,” which showcased his strong songwriting skills with the lyrics “Oh, but the reaper man / How he loves me so / I can’t whispers / As the cold wind blows.” Sensor’s performance demonstrated his original talent that will no doubt take him far.

After Sensor’s set, Foy Vance took to the stage. Vance’s sound is a perfect blend of Irish folk and Southern spirit. Rightfully so, since Vance spent a few years living in the South during his childhood before his family moved back to their native Ireland.

Vance has been helped out by some big names in the music industry. In late 2015, Vance became one of two musicians to sign to Ed Sheeran’s Gingerbread Man Records. Sheeran has been a huge fan of Vance’s since he was a teenager. Vance even co-wrote “Tenerife Sea” and “Afire Love,” two popular tracks from Sheeran’s mega-successful sophomore album, “X.” Another supporter of Vance is Elton John, who served as executive producer on Vance’s newest album, “The Wild Swan.”

Throughout the night, Vance played many songs from “The Wild Swan.” The small crowd stood in awe as Vance started off his set with “Be Like You Belong,” a slow and soulful track from the new record. A notable track Vance performed was “Noam Chomsky Is A Soft Revolution,” a song dedicated to the famous American linguist and political activist. Vance told Billboard, “Never has a human being spoke so softly when delivering such a devastating truths as when Noam Chomsky shared his thoughts with the world.” The track has a strong bluesy and rebellious feel similar to the Beatles’ “Revolution.”

Vance’s performance of “She Burns” started out with a mock country version before he switched to singing it the original way on the new album. The track stands out on “The Wild Swan” as the most notable with its catchy guitar riff and poetic lyrics.

One of the last tracks Vance performed, “Guiding Light,” wowed the entire audience. Vance counted on the crowd to echo back the chorus to him, making for a memorable interactive moment.

Vance ended his set without a bow but instead by simply walking off the stage while still singing, showing his down-to-earth style.

Together, Sensor and Vance gave St. Louis an intimate show filled with folk and magic. The two are no doubt talented musicians. Though they only played to a small crowd, both could perform in front of thousands with their captivating spirits.