Billikens 1-1 on the week 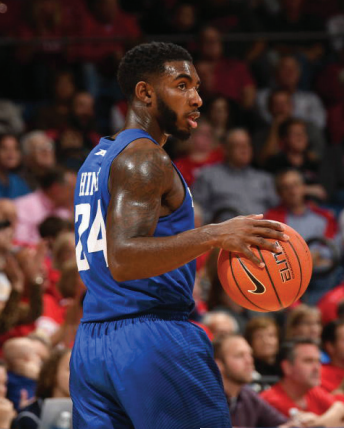 SLU Men’s Basketball traveled to Washington D.C. on Sat., Jan. 28 to face conference foe George Washington. Despite a strong start and halftime lead, George Washington rallied near the end of the game to defeat the Billikens 63-55.

The Billikens had a fast start, making their first eight shots from the field and first five 3-point shots. SLU built a lead as large as 13 points in the first half, led by junior guard Davell Roby who scored eight. SLU took a 29-23 lead to the locker room.

The largest lead for the Billikens in the second half was 10, off a 3-pointer by redshirt freshman Elliott Welmer with 12:40 remaining to play. GW rallied with an 8-0 run to cut the lead to two, but the lead again jumped back to five with a 3-pointer from a senior guard Mike Crawford. GW tied the game again minutes later, but Roby hit a trey of his own to put the Billikens on top again.

Crawford put the Billikens on top for the final time with 4:24 left after a 3-point play. With less than three minutes to go, GW received points from Patrick Steeves, who hit a basket and Jaren Sina, who hit a trey. SLU was never able to regain the lead.

Notables for SLU in this game were Welmer, who shot 7-11 from the field and 4-7 from the arc, scoring 18; Roby, who shot 5-12, scoring 13; and Crawford, who scored eight and pulled down seven rebounds. In contrast to the U-Mass game, where SLU attempted a school record 55 free throws, SLU only attempted six. SLU falls to 6-15 on the year and 2-7 in the A-10.

SLU got on the board early, winning the tip-off and scoring off a 3-pointer from junior guard Aaron Hines.

Junior guard Davell Roby hit a pair of free throws in the final minute to cut the lead to two. Redshirt freshman Elliott Welmer hit a layup with 36 seconds left to tie the game up, and SLU headed to the half tied at 27-27.

Senior guard Mike Crawford hit a pair of free throws to put SLU up 55- 54 with 2:43 left in the second half. The teams battled back and forth right down to the wire, but Mason hit a free throw to tie the game at 59-59. Nobody else scored, sending the game to overtime.

The teams battled back and forth throughout overtime and Welmer tied the game up 64-64 with a free throw, sending the game to double overtime.

SLU trailed by as much as five, but SLU eventually regained the lead. A pair of Mason free throws later tied the game up at 74-74, but Crawford answered with a last second layup to win it.

Next up for SLU is an out-of-conference matchup vs. North Carolina A&T. Tip-off is scheduled for 7 p.m. Sat., Feb. 4 at Chaifetz Arena. Afterwards, SLU will resume their conference schedule with an away matchup against St. Bonaventure, before returning to take on Duquesne and Dayton at home at Chaifetz Arena. SLU will hope to improve on their poor 6-16 overall record this season.