Revisiting the fight for Civil Rights 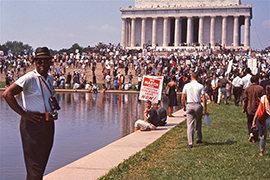 “I Am Not Your Negro” hits hard

Raoul Peck masterfully crafts a political documentary, “I Am Not Your Negro,” (produced by Magnolia Pictures) which has its roots in the thoughts and ideas of James Baldwin, who was a social and political activist and an impactful speaker of his time.

The film is based on Baldwin’s unfinished novel “Remember This House,” which provides Baldwin’s commentary on the presence of racism during the civil rights movement along with his personal views on his relationships with Medgar Evers, Malcolm X, and Dr. Martin Luther King Jr.

Starting out as a narrative by Baldwin, voiced by Samuel L. Jackson, the director creates this powerful cinematic masterpiece by adding various political cartoons, film scenes, reality TV scenes, and scenes from Baldwin himself on a talk show. All these aspects merely emphasize the message that Baldwin was trying to convey to his listening audience.

The documentary begins with a shocking scene from “The Dick Cavett Show,” in which Baldwin declares that he feels hopeless for the state of racism in America, to which Cavett stares right back at him in awe. The film is woven with various film clips and pictures which explain why Baldwin believes in the certain values he does and convinces the audience that there is a visible sense of hopelessness regarding racism in America.

Peck makes sure to add pieces of Baldwin’s own childhood, such as the time Baldwin had a white female teacher, named “Bill Miller,” who provided a lot of support to Baldwin’s learning and took him to films and plays from which he realized that he could never hate white people. As Baldwin grew up he continued to watch films notably starring the likes of Sidney Poitier and Harry Belafonte from which he drew memorable perceptions of the societal norms.

Peck correctly identifies Baldwin’s love for film and intertwines specific scenes from films such as “The Defiant Ones,” which portrays how the black man continues to save the white man, which might not necessarily be how the relationship works when roles are switched, such as in the film “They Won’t Forget,” in which Clinton Rosemond plays a murder suspect.

Peck flawlessly manages to take Baldwin’s idea and stresses its timeless aspect, by mirroring some of Baldwin’s speeches with Barack Obama’s election, the Ferguson incident, and the Nazi uproar.

By doing this, Peck proves that the problem of racism that was relevant during the Civil Rights Movement is equally as relevant now, and that Baldwin would probably have the same reaction to these current events.

The highlights of the film that make it so influential are both the specificity in the visuals that are chosen and the choice to voice Samuel L. Jackson as James Baldwin.

Visually, Peck seems to handpick pictures that express Baldwin’s feelings through his memories such as the pictures from the death of Dr. Martin Luther King Jr., or even the pictures of both Malcolm X and Baldwin when they share conversations, as Jackson compares and contrasts their moral and political values through narration.

Peck masterfully changes out the visuals, some black and white and some in color to create power through the story. Peck makes a strong choice when opting for Jackson as the voice of Baldwin, who instead of an impersonation, piercingly narrates Baldwin’s thoughts with his deep voice.

Peck explores the message of Baldwin that racism is not the problem, but the problem instead lies within American perception itself. With an assortment of shocking visuals and the impactful voice of Samuel L. Jackson, who delves into the character of Baldwin, “I Am Not Your Negro” comes out right in time for Black History Month with a tale of a black man’s truth regarding racism in America.