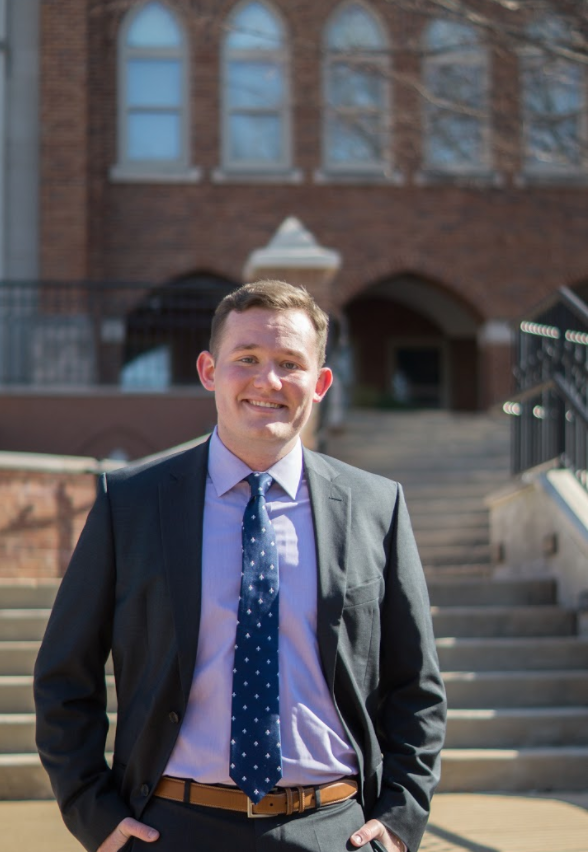 On the night of Feb. 27, Saint Louis University announced its new SGA president: junior Daniel Carter. Formerly serving in the Residence Hall Association as Fusz Hall Campus President and the VP of Finance, Carter developed his interest with codifying transparency to the student body – this interest later evolved into his involvement with the federal government. “I was fortunate enough to serve as an intern in the Public Affairs Section of the U.S. Embassy in Vienna, Austria, working for the State Department,” Carter said.

As part of Carter’s internship with the U.S. Embassy, he elaborated on his experience sitting on its grants committee. According to the Austrian-American Partnership Fund, its mission is to support collaboration and cultural exchange between Austrian and U.S. non-governmental organizations, universities, professional associations, arts and cultural organizations through the process of fostering connections and sustainable relationships between the U.S. and Austrian entrepreneurs. This promotes dialogue and debate around issues of mutual importance, showcasing young American artists whose work has yet to be performed in Austria and build capacity in the area of U.S. studies.

While serving on the panel, Carter discussed visible issues with transparency, which became one of the predominant strongholds of his SGA campaign. From money distribution to what purpose financial allotment will be utilized for, Carter promised “[to amend] the SGA constitution to require publishing the SGA budget to the entire student body.”

Unlike Carter, SGA presidential candidate and VP of Internal Affairs Jay Hardin saw it as necessary to advocate for an increase in funding for the Chief Diversity Officer’s division. “Dan has some lofty goals, but he has failed to mention the Clock Tower accords,” Hardin said. “We are in our third year of the Clock Tower accords, and it is still not completed – yet no one has touched on how minority students are being looked over without a voice.”

Ultimately, it all came down to how the students perceived who was most experienced for the position and how their social media podiums attached a name with the goals they spelled out for the next year. “Social media played a huge role in this election because Dan did do a good job – he created a Facebook page that received a ton of likes and created a Snapchat filter, but the students have to look at who has the most experience within the SGA committee as well,” Hardin explained.

Describing his platform as “not as sexy as Carter’s,” Hardin related that he would not have changed anything regarding his student outreach. “I ran a good campaign, but still do not see an SGA transparency problem. As someone who has been a part of SGA since my freshman year and part of the annual funding process twice now, I see an outdated directness problem instead,” Hardin said.

Per the disparities among the platforms of the president- and vice presidents-elect, Hardin acknowledged the difficulties in settling on a cohesive goal; however, Carter portrayed knowledge as a powerful tool in order to “get things done” and create equitable solutions despite preeminent campaign declarations. “In terms of social justice, a topic that is close to my heart, [it] is the ideal of ensuring that people are treated equitably regardless of any aspect of who they are,” Carter explained. “Particularly, a point of issue lies in the people with mental illness, so what I would like to do is have SLU Wellness hop onboard with SGA to pass a resolution identifying mental health awareness, trying to reduce that stigma and ensuring equitable treatment for all SLU students.”