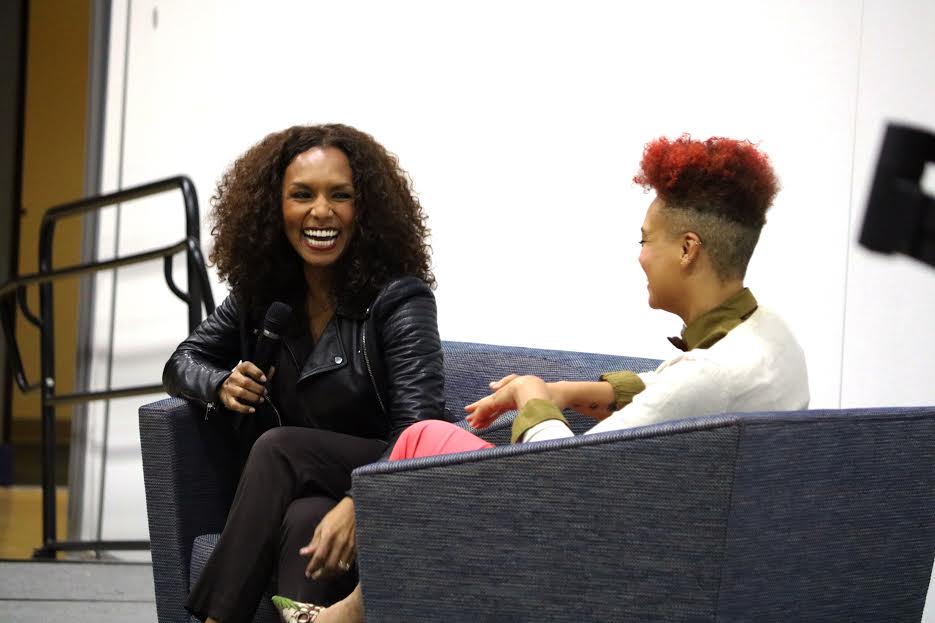 Mid-way through its Kick-Off Week, Free to {Be}, an intersectional feminist group, welcomed its key-note speaker, Janet Mock. A journalist, Mock has made a strong career in a field that has been predominantly male since its birth. Not only has journalism left little room to women, it has left little room to women of color and virtually no room for transgender women. What if one identifies as all three? Speaking to an intent audience, Mock shared her journey of navigating the field as a trans woman of color.  She spoke of intersectionality, of privilege and of a world that fundamentally questions her right to exist.

“The one time I swore on Twitter is the time I became a sensation,” Mock chatters lightheartedly as an opener into a more serious point about how her personhood has been twisted to attract ratings.  “That was my one moment and I never engaged in that space ever again,” Mock said. “’Grace under fire,’ but if I would have expressed any outrage or anger, I would have been framed as an angry black woman.”

Unpacking full questions of her intersectionality, Mock kept the jokes and the wit rolling throughout the session. She sat back in the chair on stage with ease and the curls that she is so proud of, and should be, shook with her whenever she laughed. There was an aura of professionalism around her as she recognized that “pretty privilege” and “passing privilege,” privileges that many in the trans community do not have, have helped her climb the ladder in the digital media world. She questioned notions of attractiveness and what that looks like for trans women. Sitting in the audience, men and women alike garnered the strength and confidence that Mock possessed.

As the third wave of feminism crashes on the shores of the rising generations, what feminism entails has drastically changed from the trans-exclusive white feminism of the 1970s.

“What I’m grateful for is I’ve created a conversation because I think that a lot of cisgender feminists feel this way, and continue to create these boundaries of womanhood, to say that who is really a legitimate, authentic, valid woman,” Mock said as she spoke of the way feminism is working to include all individuals who identify as a woman. “But what we don’t realize is that womanhood was not something that was inclusive of most of us, period. Specifically, not black women.”

Although Mock spoke of “passing privilege,” the privilege to not be identified as a transgender woman if she chooses not to, she does not allow that to delude her vision of an unwelcoming world.

“What intersectional feminism is, is the folks that have access and influence and power, they go and get their sisters,” Mock said. “They tell them and they educate them and have the challenging conversation to not rest on the shoulders of black trans women who are being dragged, maimed and beaten globally for existing as women, but a very specific woman, a woman that is not supposed to exist.”

Mock shared her experience with a diverse audience. While not all who listened could hold similar experiences, all who walked out of the CGC on Wednesday night shared similar thoughts. “Students are taking initiative to have different identities centered in student functions,” said class of 2016 graduate and current law school student Emily Goeke.

Hannah Gilroy, a junior, shares that the conversation that surrounds intersectionality in spaces such as the one created during the event leads to a trickledown effect and that one starts to have conversations with his or her friends about understanding different identities.

“Safe spaces turn into brave spaces,” Gilroy said.  A brave space was created, as Mock engaged with students and the broader community, due to a sense that comfort zones were shattered as she stated with a laugh, “I don’t like people that much.”

The event ended with a question and answer session, which gave students the chance to openly engage with Mock.

Free to {Be} has already hosted events such as a screening of  “Gender Revolution Documentary” and SafeZone Training. Programs for the rest of the Kick-Off week include two events on Thursday, March 30, Hope in the Resistence: Justice Showcase, which is also held on Friday, March 31, and,  finally, the last event includes Disabling Bias: Centering the Narratives of People with Disabilities, also on Thursday.