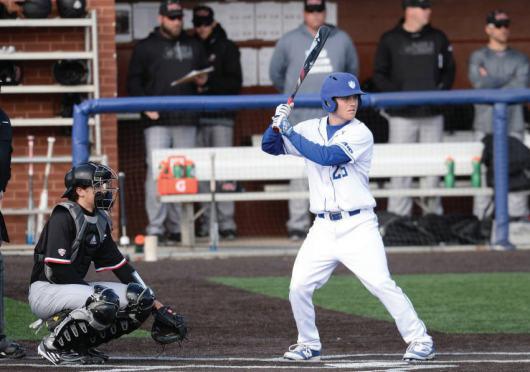 Baseball’s hot start appears to have fizzled out completely, with the Billikens enduring a rough patch that they hope will disappear in time to deliver an impressive performance during the Atlantic 10 Conference Championships. Over the last eight games, SLU baseball has put up a meager 3-5 record.

First off for SLU baseball was a two-game series against Fordham. The resulting two games seemed to be a microcosm of SLU’s performance this season—after thrashing the Rams 10-0 in the first game, SLU was then defeated 7-1 in the second.

The first game against Fordham saw a masterclass pitching performance from sophomore pitcher Miller Hogan, who moved to 5-0 on the season and threw eight innings of five-hit ball. He recorded only two walks and scattered four strikeouts in his eight innings.

SLU’s 10-run offensive explosion came in part due to a strong performance from junior catcher James Morisano, who went 4-for- 4 to record SLU’s first fourhit game of the season. One of those hits was a home run, which brought Morisano to six four-baggers so far this season. Redshirt senior Trent Leimkuehler hit a double in the eighth inning of the first game, meaning that he continued his extrabase batting with his 14th double of the season. Junior outfielder Parker Sniatynski was 3-for-4, and scored two runs while recording a steal in the first game.

Game two also had some notable individual performances, although SLU could not put it together as a team and only managed to score one run in a disappointing performance. Sniatynski went 2-for-4, giving his second straight multi-hit performance. Junior shortstop Alex King also went 2-for-4, moving his season batting average to a very strong .319.

SLU then lost their second straight game, with this loss coming in a close 5-3 loss to McKendree. Junior pitcher Aaron Patton took the loss after failing to get an out and allowing three runs on two hits and a walk. SLU’s only offense came from freshman Ryan Hernandez, who hit a home run, and Sniatynski, who hit a triple to drive in a run.

SLU travelled to Amherst, Mass., to continue their season against the UMass Minutemen, and won two games out of the three-game series. In the first game, which SLU won 8-4, senior pitcher Devin Mahoney moved to 4-0. Garella once again provided a strong pinch-hitting performance, sparking the six-run seventh inning outburst with a double.

The second game against the Minutemen also went to the Billikens, with SLU winning 8-1. Hogan turned in another dominant pitching performance, and allowed no runs over six innings, and now has a 1.24 season ERA.

The final game against UMass went to the Minutemen in the ninth inning, despite Morisano’s seventh home run of the season. The starting pitcher, Wark, had six strikeouts in five innings. SLU only lost by one run, after surrendering two runs in the ninth inning.

SLU also dropped their next two games, against Missouri State and SEMO, by scores of 15-8 and 13-2, respectively. Against Missouri State, freshman pitcher Garrett Acton took the loss, allowing six earned runs in 1.1 innings. Then, against SEMO, Sniatynski and freshman catcher Ryan Hernandez provided the only offense with solo shots into the stands, while SLU failed to keep SEMO from scoring.

SLU is now 21-13 on the season and 5-5 in the Atlantic 10. Next up are three conference games at home against Dayton, beginning on April 21 at the Billiken Sports Center.