Let Us Introduce You: Eric Eggemeyer 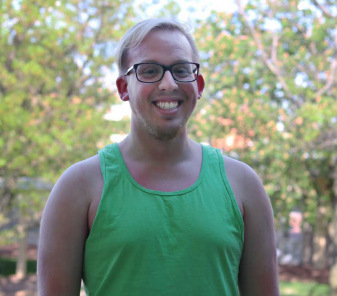 Let us introduce you to Eric Eggemeyer. He is from Waterloo, Ill. and studies history and secondary education. Originally, Eggemeyer decided to attend SLU because his mom was an employee, but he grew to love the university because of the people.

SLU is composed of people from a mixture of cultures who have different political views and backgrounds. Eggemeyer appreciates that his professors have made an effort to teach students the importance of working together, no matter their beliefs or previous life experiences.

During his time at SLU, Eggemeyer has changed his major several times: physical therapy, nutrition and dietetics, music, communication sciences and disorders, history, then education. After six years of school, he is graduating in May. In his words, “At last!” Junior year, he decided to become a double major in history and education. Although he could have graduated a semester early, he decided to follow his passion for teaching.

Eggemeyer has been heavily involved with the music scene at SLU during his six years. He was in Master Singers for two years and Astha A Cappella the past four years. He played trombone for several years throughout middle and high school, but never pursued band at SLU because he enjoyed singing more.

Joining Astha proved to be one of his best college decisions, according to Eggemeyer. Although he auditioned for several other a cappella groups in the past, he decided to join Astha because his friend Jessica goaded him to try out. Astha is the co-ed Indian fusion a cappella group on campus.

Singing is a way to unwind from the stress of college; Astha has provided Eggemeyer with not only the opportunity to relax, but also to interact with a different kind of culture.

This Sunday, April 23, Astha has a concert in Tegeler Hall at 3 p.m.

Q. What is your favorite vacation memory?

In high school, I went to Florida with the school band. We stayed on Disney World property for a whole week and went to two different parks each day. The last day, we marched in the daily Disney parade.

Q. Who is your role model?

My mom for sure! I respect her a lot; for most of our lives she has been a single parent. We don’t have a lot of money, but she always put food on the table and found time to be home.

Q. What character quality do you hope people learn from you?

Open-mindedness. You can learn a lot more when you keep an open mind. People feel safer during conversations and it’s possible to have more productive discussions about controversial issues.