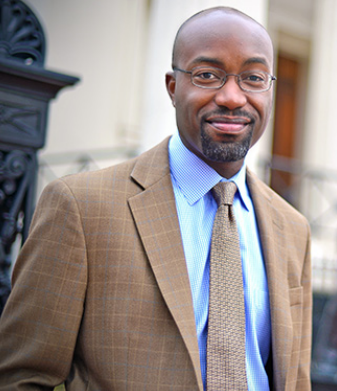 On Wednesday, April 19, Dr. Jason Purnell spoke on race, class and well-being in St. Louis. His lecture, titled “For the Sake of All: Translating Evidence into Health and Well-Being,” featured a May 2014 report done by the organization For the Sake of All about the health and well-being of African Americans in St. Louis and, most importantly, why it should matter to everyone.

Purnell is an associate professor of social work at Washington University in St. Louis. He received his undergraduate degree from Harvard, his Ph.D. from Ohio State University and is a licensed psychologist. He was invited to speak as part of the “Happiness and WellBeing” lecture series, aimed at discerning quality of life, how human lives matter and how to make them better.

The lecture series is part of a larger initiative: “Happiness and Well-Being: Integrating Research Across the Disciplines.” The $5.1 million project is a partnership between Saint Louis University and the John Templeton Foundation. The funding is used for research done by people of various disciplines, including the sciences, philosophy and theology and religious studies, for the purpose of figuring out what makes life worth living and how to secure quality of life.

During Purnell’s talk, he heavily referenced the research done for the 2014 report. He said the report project focused on the social determinants of health: the conditions in which people were born, grew up and worked and the daily conditions of life. Economic policies and systems, development agendas and social norms are just a few factors that contribute to quality of life. Purnell said healthcare is not the sole contributor to health; communities and households play the biggest part. In the health impact pyramid, poverty, education and housing are the main issues contributing to wellness.

There were fours goals for the report. First, “Inform the public about social determinants of health as they impact African Americans, as one of the populations most impacted by health disparities.” Second, “Present the regional, economic and health consequences of intervening (or failing to intervene) on social determinants of health.” Third, “Provide evidence of the impact of persistent disparities on all members of the region.” Finally, “Influence the policy agenda on health disparities by broadening the conversation beyond personal responsibility and the delivery of medical care.”

Purnell showed a graph displaying the death rates of African Americans and whites in St. Louis. There was a general decrease in mortality, but the gap between white and African American death rates was astounding. Purnell said being in poverty and receiving less than a high school education are the two biggest contributions to the death rate. Although it may seem that the factors should not be linked to death rates, it has been proved that social factors largely impact death rates.

Although healthcare plays a part in premature death, according to the For the Sake of All report it is only 10 percent. Behavioral patterns such as diet, smoking, weight and physical activity impact premature death rates the most. Generally, people group individual effort and responsibility with behavioral patterns, but Purnell said there is more to it. Behavior happens in a context: some people feel unsafe in their neighborhoods, making it impossible to go outside for an afternoon walk and others do not have access to healthy foods. Thirty-nine percent of African Americans in St. Louis city consider themselves to be safe in their neighborhoods and 66 percent have easy access to healthy food.

Education is one of the most consistent and strongest predictors of health outcomes, but race still affects mortality. Purnell said, “Even if I had a magic wand and gave everyone a college education, race still plays a role.” In a hospital, if a woman gave birth to a black baby, the infant would automatically have a higher chance of death than a white baby born in the same circumstances.

Purnell said money is being lost, and his recommendations are as follows: “Invest in quality early childhood development for all children, help low to moderate income families create economic opportunities, invest in coordinated school health programs for all students, invest in mental health awareness, screening, treatment and surveillance, invest in quality neighborhoods for all in St. Louis and coordinate and expand chronic and infectious disease prevention and management.”

Phase two of the For the Sake of All project is to engage the community, inform policy makers, activate private and public sector stakeholders who can implement change and evaluate the impact of the project.

In the United States, Purnell says the popular conception is that individual effort determines life outcomes. There is a cultural and values-based brick wall that makes it difficult to enact policy and program changes that are necessary to make the city a better place. Purnell said individual effort is essential to a successful and productive life, but is not sufficient. Without a supporting context, individual efforts do not ensure success. People mostly look at the quality of life to see issues, but do not take the time to look at the environment people were born into, whether that be a city or a specific race.