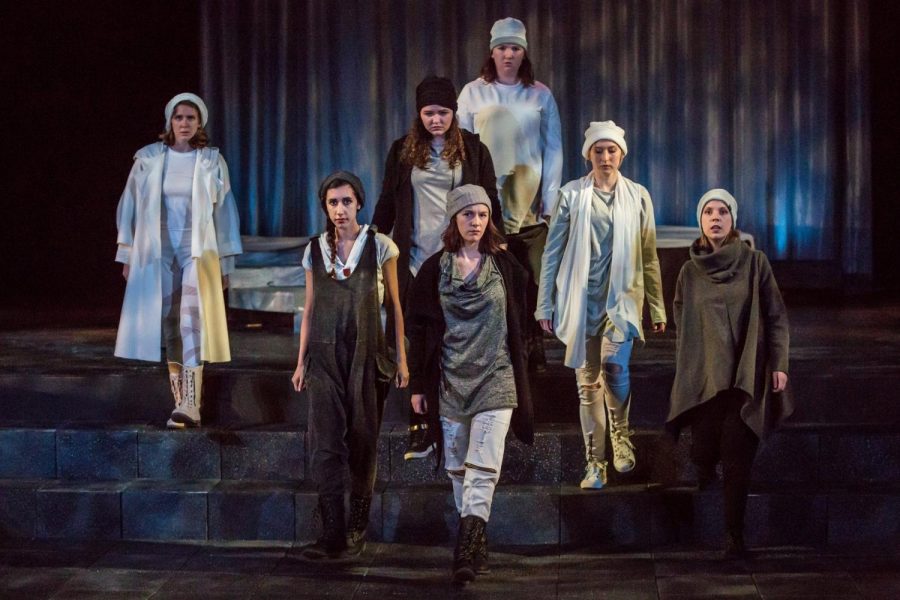 The production used the original work by Sophocles as a framework for the messages that the company hoped to convey, making drastic changes to the dialogue and structure. Included in these changes was the incorporation of the original work of SLU students as well as of inmates at Women’s Eastern Reception, Diagnostic and Correctional Center in Vandalia, Mo.

As the play opens, several sheer drapes with drawings of warriors hang down onto the stage. Drums play loudly and chaotically to signify the chaos of the war in Thebes, where the play takes place. One by one the women rip the drapes from the ceiling and cry silently into them, symbolizing the death of their male loved ones. The role of women is also accentuated by the fact that the women pull down the veils that hide the desolate landscape of Thebes themselves. This introduction sends a message early on that the women are the agents of change and of wisdom in Thebes.

While the work by Sophocles itself contains profound messages about power, authority and morality as they pertain to the roles of women, the inclusion of the original writing of inmates and of students added an entirely new dimension. There were short monologues and poems performed as supplements to the plot, detailing the feelings of isolation that prison forces upon inmates and comparing those feelings to the feelings of Antigone and Ismene in the play. Dialogue between the sisters about powerlessness was also added to enhance the connections between the modern context of the collaborating inmates and the female characters.

The women’s dialogue was not the only part of the play that strayed from the original in order to enhance the play’s meaning in a modern context. The dialogue of the guard (Valen Piotrowski) whose duty it was to tell the tyrant, Creon, that his orders had been disobeyed, incorporated an onslaught of contemporary wordplay and jokes that could only be understood from our modern point of view. The guard in the original play is understood to present the context in which we judge the harshness of Creon, who, upon hearing the news from the guard, almost “shoots the messenger.” The changes to the guard’s dialogue not only provided an added element of comic relief for those watching, but also made his role as an indicator of the king’s irrationality more clear to a modern audience.

There were several ways in which the producers and collaborators worked to make the play more palatable and applicable to modern sensibilities. Some concepts, terms or references that were made in the play would have only made sense to those listening thousands of years ago. When one of these concepts came up in the play, there were times in which the play literally stopped in its tracks so that the chorus or the women could explain what that term meant in layman’s terms. There was also supplementary vocabulary sprinkled in to magnify the importance of certain parts of the play. For example, there was no pressing need for the audience to know the meaning of Antigone’s name if we were to understand the plot or themes in general, but when the women said “Anti: Against. Gone: Birth,” there was additional insight into the role the character of Antigone played within her society.

The costumes and props were also utilized to communicate the nature of the roles the characters played in their societies. Creon wears a black crown for the entirety of the play, throwing it off of his own head only when he receives advice from the prophet, Tiresias, to forgive Antigone and set her free. The women wear combinations of clothing in grayscale, while the men wear primarily dark or black clothing. This sets up an interesting dichotomy from the beginning and allows the audience to discern what the directors wanted to say about the roles of men and women, or “the powerful” and “the powerless.”

Overall SLU Theatre’s collaboration with Prison Performing Arts was a great success, and provided a great start to the Theatre company’s social justice themed season this fall. The modern adaptations to a still-powerful classic allowed modern audiences to connect with the enduring ideas of Sophocles in a new and dynamic way