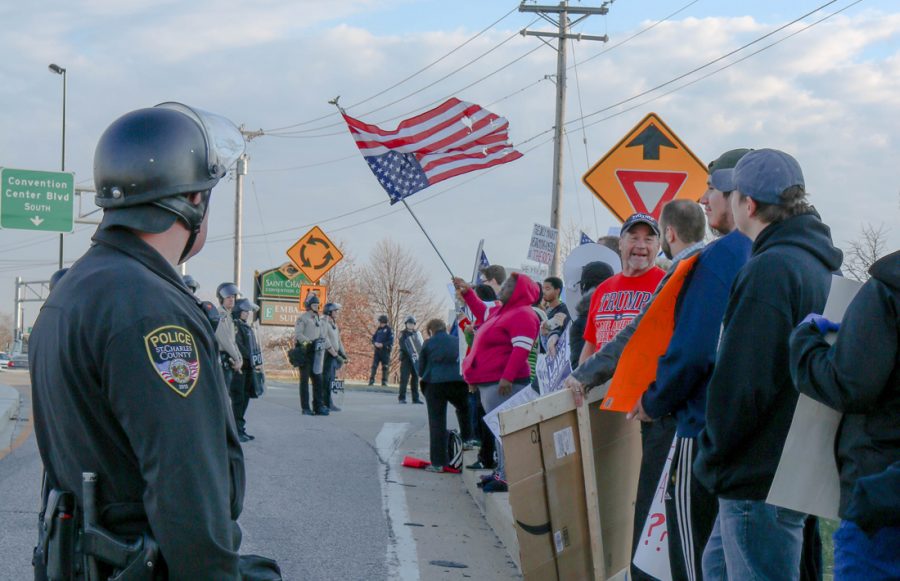 Three hours prior to President Trump’s speech at 2:20 p.m. on Wednesday at the St. Charles Convention Center, protestors and supporters gathered outside the building where the president was to speak on the Republican tax plan. Exchanging chants, the parties were either heard shouting, “Make America great again,” “Who do you serve, who do you protect?” or “No Trump, no KKK, no fascist USA.”

While Trump supporters stationed themselves on one side of the street and activists on the other, some members from both groups intermingled to make a direct statement to the other, escalating the confrontation. From burning Trump signs to using a small shipping box with the words “We love and support Pres Trump” to collect the signs’ broken pieces, the supporters and protestors gathered for more than just the tax plan—they congregated to make a political statement.

The tax plan will consist of separate House and Senate plans and will include major reductions in the corporate tax rate and individual tax rates, and it will increase the standard deduction. While Republicans claim that the tax plan will improve the economy by creating more job opportunities, critics see it as championing businesses and wealthy taxpayers. On the other hand, the tax cuts for middle and lower incomes will expire within a couple of years.

Wednesday’s event regarding this plan was not open to the general public. Instead, invited guests of organizations, such as the National Federation of Independent Businesses and the Chamber of Commerce, were invited to attend.

Video recorded by the University News on November 29, 2017 outside the Saint Charles Convention Center as both protestors and supporters of the Trump tax bill gather.