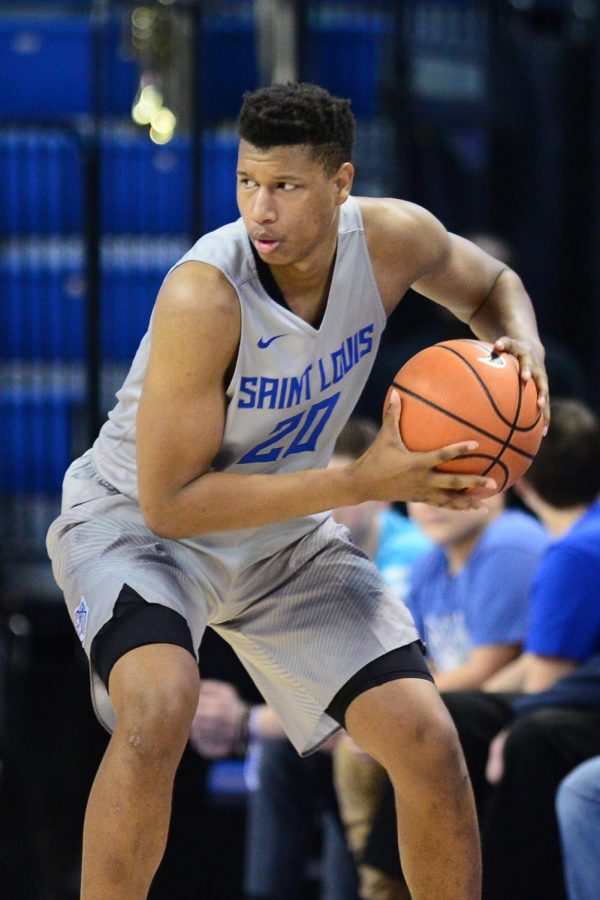 Sophomore forward Jalen Johnson thinks about what to do with the ball. Johnson came to SLU, and hasn't looked back since signing with the Billikens.

Johnson came in as the “Baton Rouge Bomber” but the voice of SLU basketball, Bob Ramsey, decided to change it up, and thus the “Bayou Billiken” was born.

In his second year as a Billiken, Johnson made a big impact on the team with his hard work and 3-point shots. “I ended up at SLU as a late signing,” said Johnson. “Coach Ford saw me late. When he first got the job he recruited me here and I thought it was a great opportunity, so I took it.”

Since then, he has worked hard to continuously up his game. From the court to the classroom, Johnson stays on top of his obligations as a student athlete.

“You have to exert your body to the fullest, you have to do your homework, [and] make the tests,” said Johnson. “But I love it, because it keeps me on point.”

The 6’7” forward from Baton Rouge, Louisiana has been playing basketball since he was a child and eventually found a deep love for the game in middle school. Johnson said that period in his life is when he began to work hard in his off time. He would go to the gym and shoot with his dad to improve his game.

The hard work he put in in middle school payed off when Johnson and his high school team won three state championships. That hard work and determination eventually led Johnson to SLU, more than 600 miles away from home.

“My family is my A1 since day one,” said Johnson. “Even though they’re not here, they’re here.” Living far away from home has helped Johnson to grow as an individual, seeing that he cannot rely on his family’s physical presence, and instead allows his family to support him from a distance. Johnson said his mom offers him strong emotional support and his dad gives him support to keep motivated.

His family keeps him going even when times get tough. And for someone who is always traveling for games, things can get very difficult.

Johnson said, “every day is important in college, so missing days is really tough…you’ll be sitting on a bus or an airplane and you’ll be tired because you just played, and it’s 11 o’clock at night, and you know you’ve got homework. It’s really tough for the mind.”

But Johnson fights through those tough nights in hopes that he can live out his dream and play in the NBA. Meanwhile he is studying to get a degree in communication, so that he can go into broadcast journalism after his basketball career. Johnson found the joy of basketball commentary and analysis while attending his little brother’s games. He would sit next to his parents and do commentary while cracking jokes.

From his first year at SLU, through this year, and to the next Johnson has seen his skill as a player and a leader develop. He said that “most people only see the performance.” When fans fill the Chaifetz Arena, there is a lot that happened before that 7 o’clock tip off that makes a game so fun to watch, and for Johnson, his team gets him through it.