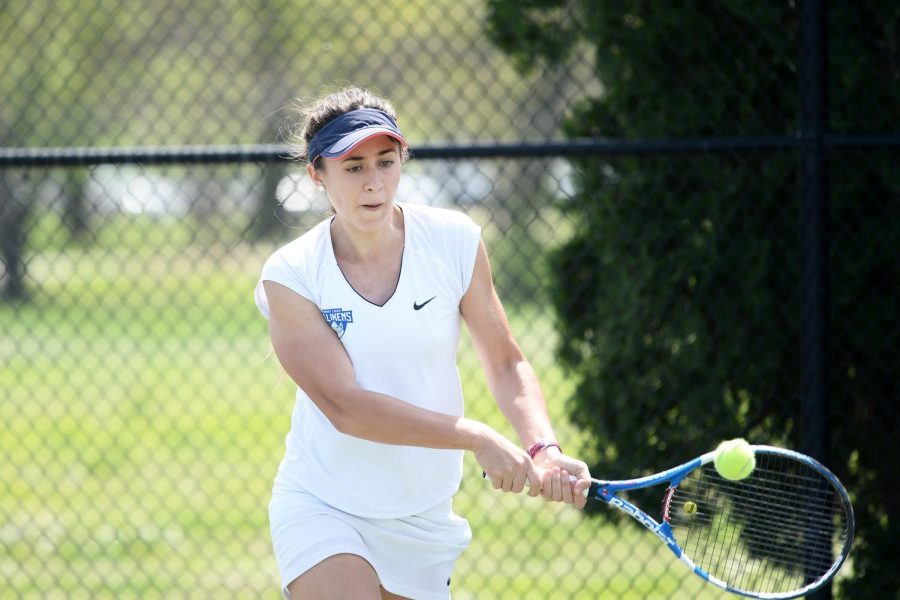 Return: Sophomore Mariluz Rojo watches the ball all the way into the racket. Rojo, a native of Spain, has adapted well to life as an international student-athlete.

Saint Louis University’s student-athletes are not only from every corner of the United States, many are from various countries throughout the world. Women’s Tennis sophomore, Mariluz Rojo, comes to SLU from Burgos, Spain, a city in the northern part of the country. She is a student in the Parks College, studying Biomedical Engineering on a Pre-Med track.

Mariluz was familiar with the idea of playing a sport in the United States growing up, because some of her older friends had done it before her. She also knew that playing in college overseas was becoming more popular for European students, especially in tennis, because they didn’t have the same opportunities to play for their universities like they do in the US. The university systems in Europe, specifically Spain, differ from those in the United States because students in Europe don’t live at their schools. Many people go to the university closest to their home and attend classes, but continue to live at home. These schools don’t have sports teams attached to them and people that want to continue playing sports must go to local clubs outside of their school.

As a kid, English was a subject in school that Mariluz really enjoyed. She started learning how to speak English at the age of 6 and she went to a language school, because “[she] really liked it.” Her confidence in the language made her decision to study in America that much easier. She was excited to study abroad because she loves to travel, and it was a great opportunity to visit a new country in a financially possible way while continuing to play tennis.

In her recruiting process, Mariluz didn’t come to SLU, SLU went to Mariluz. International students have a different method of getting recruited because often coaches aren’t able to travel around the world to see the talent. Students interested in playing sports for NCAA schools from foreign countries go through agencies to reach out to potential coaches. She had only heard about SLU after her agency had contacted the coach and had heard back.

One of the hardest things about being away from home for Mariluz is missing her parents and sister, but she loves that she gets to be independent and solve her own problems. “You have to be more mature, even if you don’t want to,” she said. Despite being far from home, she isn’t the alone on her team in that aspect. Mariluz is one of 4 international students on the 8-woman tennis team.

Coming to SLU was the first time that Mariluz had ever come to America. She loves to travel but “in Europe [they] don’t have the same mindset [that Americans do] where everything is close-by.” To most Americans, a 5-hour drive doesn’t sound all that bad, yet if you were to drive 5 hours in Europe you would likely end up in a different country, maybe even 2. She really appreciates the opportunities she has had to travel within the US due to tennis. Her favorite trip was the one the team took to New York before spring break. She had never been, and it was a great experience she got to do with her teammates. Although her favorite place she’s visited is New York, her favorite memory from tennis, so far, has been traveling to Orlando, Florida For the conference championship match last season.

College tennis is a spring sport, but teams have a few competitions in the fall for their off-season training. It also differs from many other organized tennis teams because each player competes in both singles and doubles, a reason collegiate tennis teams are so small. Mariluz prefers doubles to singles because, “it is super fun, very fast, very intense, and you aren’t alone on the court.” The team tries to keep their doubles teams together so the two grow as a team and know how to work together on the court.

In her freshman year, Mariluz posted a singles record of 18-14 and a doubles record of 9-9. So far in her sophomore year she has gone 9-9 in singles play and 10-7 in doubles. The Women’s Tennis team has one more match this Friday against University of Missouri Kansas City before they travel to Orlando for the Atlantic 10 Conference Championship match.