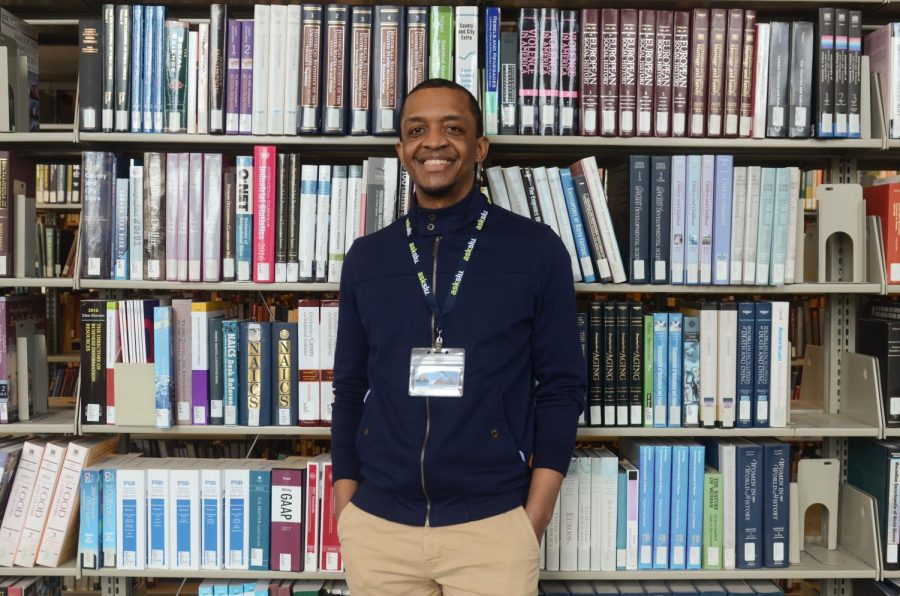 In honor of National Library Worker's Day, today April 10, I asked Lee Cummings, SLU library’s STEM Research and Instruction Librarian, to sit down and speak with me about his work at Pius XII Library.

Amidst the stacks of old academic books and students engrossed in their study cubicles, we began our conversation. Cummings began his academic journey with an Industrial Engineering undergraduate degree at the University of Toledo in Ohio. Soon after working in manufacturing, Cummings decided the industry was simply not for him, and started as a part-time shelver at the public library near his home. After encouragement from a manager, Cummings pursued a Master’s degree in Library Information Science at Wayne State University. He quipped, “At the time, I didn’t know there was a graduate degree for librarians, but there is.”

Cummings first took a job in upstate New York as an engineering librarian. He explained he had a “leg up” on other librarians, and laughed “Not many librarians have engineering degrees.” He went on to describe his discovery of the opening at SLU, citing the greater variety of subtopics in the STEM field (as opposed to only Engineering) and SLU’s Jesuit identity as the main reasons for his attraction to his position.

When I asked about the intricacies of his work as a research librarian, Cummings listed off the numerous responsibilities in his daily work. Managing the STEM collections as well as evaluating new and existing material are just a few of his undertakings.

However, Cummings expressed that the most interesting aspect of his work is interacting with patrons—students, faculty and staff— by assisting them in finding resources for research projects and classroom settings. One project Cummings is involved with is what he describes as “a very unique graduate research idea” that he could not divulge in order to conserve the student’s privacy, but he boasted the creativity of the graduate student’s work.

In addition to supporting students on staff for all things STEM research-related, Cummings also serves on the Faculty Senate as a liaison for the librarians to give them a voice, as well as keep them informed about the University’s innerworkings. He emphasizes that this position on the Senate is where he feels he can make an impact on the SLU community.

Out of obligation, I asked Cummings to name his favorite book, and he laughed along with me. It seemed like a difficult decision that he attempted to conquer by choosing one from each fiction and non-fiction genres. As he mentioned “To Kill a Mockingbird,” I excitedly agreed, sharing the same love for Harper Lee’s famous novel. Following, Cummings designated “The Short, Tragic Life of Robert Peace” as his top choice for non-fiction literature. He briefly described his connection to the subject of the story, as he grew up in a similar environment and attended a Catholic high school and entered a STEM field in college, like the main character. He said, “It was sad, but it was also a very human story.”

Nearing the end of our conversation, Cummings illuminated the myriad of resources available to SLU students and staff through the library. As a student, I recognize the difficulty that accompanies finding credible, reliable sources for my classes, especially in navigating the many databases and catalogues of research at the fingertips of SLU students. Cummings concluded, “If you are stuck on something, you don’t need to figure it out on your own. Librarians are always here to assist you.”