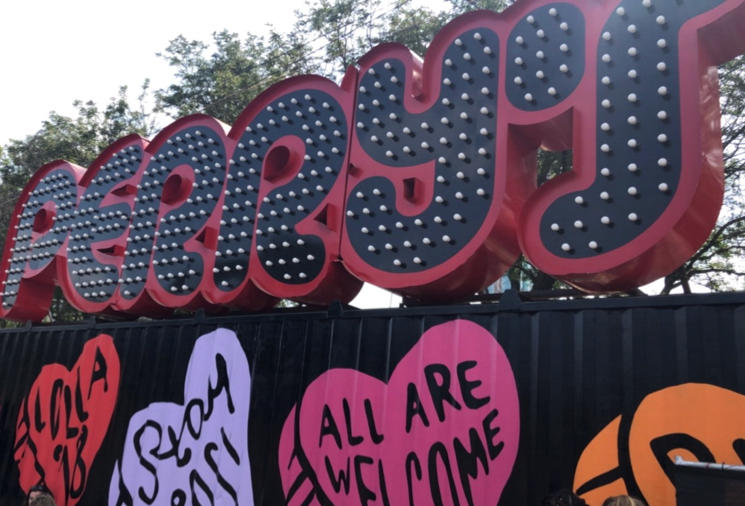 Four days. 400,000 people. On Aug. 2-5, Chicago’s Grant Park overflowed with sounds and strangers in its 27th year. The festival began in 1991 as a farewell to the Jane’s Addiction vocalist, Perry Farrell, who had a stage named after him at the festival. Although it began as an alternative rock festival, and still is with artists such as Arctic Monkeys and Jack White, it also includes hip hop acts like LL Cool J, Travis Scott, Logic, Lil Uzi Vert and Tyler, the Creator, as well as electronic acts Zedd and Excision and pop acts Bruno Mars, Carly Rae Jepsen and The Weeknd.

THURSDAY, AUG. 2: Khalid- Khalid drew big crowds as a headliner with R&B love songs. He performed a duo with Billie Eilish on their song “lovely,” ending in an embrace.

FRIDAY, AUG. 3: Noizu- Noizu was one of the openers on the dance/electronic Perry’s stage on Friday. The Los Angeles-based group’s beats drew a crowd and started the mosh pit early.

KUURO- The day transitioned into more low-key and relaxed dance music with heavy bass. The duo, consisting of Jordin Post and Luke Shipstad, is from the Netherlands. Their name, “KUURO” means “deaf” in Finnish, and their logo has the same meaning in Japanese. Deafness is certainly what the Lollapalooza crowd was experiencing after their set.

Goldfish- Goldfish is an electric jazz duo from South Africa and consists of Dominic Peters and Dave Poole.

Both add production elements to their sound, while Peters plays keyboards and upright bass, and Poole adds vocals, saxophone and flute. In addition to playing at Lollapalooza, they have performed at Bonnaroo, Coachella, Euphoria and Hangout festivals. “Lollapalooza was very awesome because the crowd was super excitable. The energy was very high. It’s almost like the songs sound different depending on the crowd,” Poole said. They played two sets at Lollapalooza – one at the huge Perry’s stage and a more intimate one on Friday evening at the after party.

SATURDAY, AUG. 4: Bomba Estéreo- Hailing from Colombia, this group performed on the Grant Park stage. Their music has been described as “electro tropical” by Sounds and Colors. They blend traditional Colombian rhythms like cumbia and salsa with the popular styles of dance and pop music to preserve traditional Colombian music, while spreading it to a wider audience in South America, the United States and Europe. In the background was colorful nature imagery and a singing parrot toy on stage, also echoing their Colombian heritage and their cheerful, light-hearted music videos. With Liliana Saumet’s Carniaval-inspired Spanish vocals and Julián Salazar’s psychedelic guitar, along with appearances at Lollapalooza and on the Pitch Perfect 3’s soundtrack in 2017, it is clear this group brings at an ever-expanding party, from Colombia to wherever they go.

Hippie Sabotage- Brothers Kevin and Jeff Saurer from Sacramento, California combine EDM mixing with psychedelic guitar. When playing live, Hippie Sabotage’s music takes on a more instrumental and improvisational feel than their studio records. The colorful light shows enhanced the music as the crowd swayed and danced to the music.

THE AFTER PARTY: The Midnight Kids, Goldfish and Autograf played an after party at the Chop Shop & 1st Ward. It was the Los Angeles-based electronic pair Midnight Kids’ first show. They remixed Goldfish’s song, “No One Has to Know”- Poole, of Goldfish, describes them as “fresh, up-and-coming guys.”

Goldfish: From a large stage to an intimate one, these “Late Night People” filled the Chop Shop. The songs faded into each other, from older classics like “Heart Shaped Box” and “Hold Tight,” to newer songs from their most recent album, “Late Night People,” like “Absolute Power.” “Late Night People was kind of a journey to making it. Each song in itself had its own little journey,” Poole said. As for the future, Peters said, “We’ve been doing this a long time, so to be able to come up with something that’s surprising even ourselves…It doesn’t always have to be what you’ve done before or what people expect of you. That’s the sign of a true artist…The new music we’ve been working on is very different.”

Autograf: “Autograf, we did a remix of their song, “You Might Be.” It’s great to have three acts of the night which are all intertwined,” Poole said. Autograf is a four-person group. Their sound was atmospheric and seemed to resonate off each other. At the end of the night, Goldfish got back on stage and played with Autograf. “We’re lucky that we can change vocalists and change instrumentalists, it keeps it interesting for us,” Poole said.

SUNDAY, AUG. 5: Portugal. The Man-One of Lolla’s headliners was Portugal. The Man, an alternative rock band from Alaska, now based in Portland, Oregon. The band came into the mainstream with their song, “Feel It Still” that came out in 2017, which brought them to No. 1 on the US Alternative Songs, Mexican and Russian Tophit airplay chart. It also won them a Grammy for Best Pop Duo/Group Performance. Their performance included violinists, a cellist and a quintet of vocalists. The band is avant-garde and has experimented with many styles, and often uses cynical lyrics. Their roots, growing up listening to 90s grunge, showed with the Beavis and Butthead backdrop and their latest album’s name “Woodstock,” inspired by the festival from 1969. Their Lollapalooza show was a symphony against the current political climate and the persistence rock.

ODESZA: Electropop group ODESZA headlined and closed the festival on the Bud Light stage. They danced along with the crowd and the whole stage flashed colors to the beat of the drummers in the air and the smoke of Lolla’s final night.

“I just want to say how awesome Lollapalooza is. We’ve played a lot of festivals around the world and this is definitely up there with top three, top five in the world. It’s got an incredible heritage, history, Chicago’s an amazing city,” Peters said. “Playing Lollapalooza is one of those dream shows.”