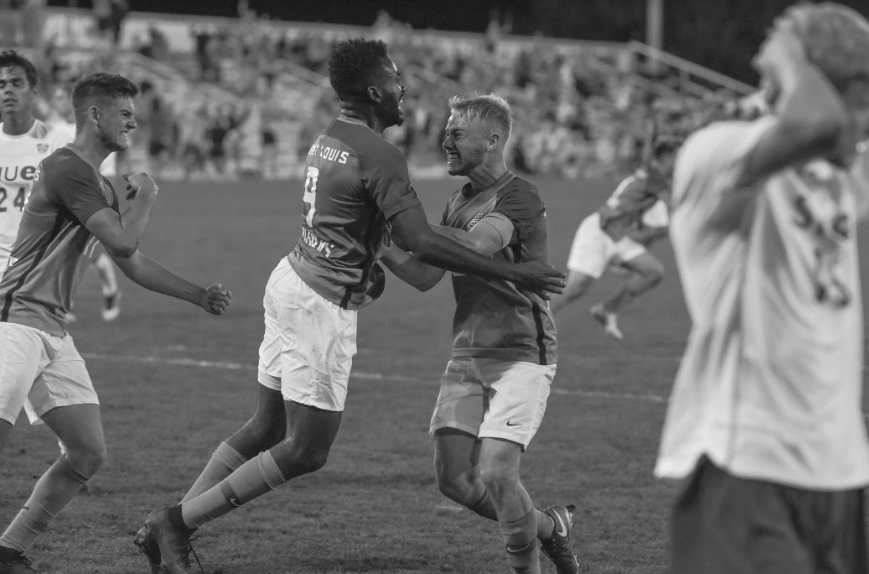 A crowd of almost 5,000 St. Louis soccer fans filled the seats at Robert R. Hermann Stadium for a Friday night game on Sept. 21. The special occasion was the famed Bronze Boot match between rivals Saint Louis University and Southern Illinois University-Edwardsville. The two teams battled it out under the floodlights for possession of the Joseph S. Carenza Sr. Trophy.

The trophy, topped with a cleat coated in bronze, was last up for contention in 1998 when the Billikens defeated SIUE for the rights to the trophy. Twenty years later, the Bronze Boot match was revived thanks in part to SLU head coach, Kevin Kalish, who led the SIUE soccer program from 2008-2013.

“From day one, when [Kalish] got the job here, we talked about rejuvenating the college game. And this game, I think, paints a really good picture for kids, [and] for the community. You’ve got two programs here in St. Louis competing at a high level, and it absolutely paints a wonderful picture of what soccer can bring to St. Louis,” said SIUE head coach, Mario Sanchez.

The first half played out back and forth, with the Billikens edging the Cougars 4-2 in shots. The half wrapped up scoreless. As the current generation of SLU and SIUE soccer players left the field for halftime, soccer alumni from the two schools were invited to step onto the pitch.
One could see the soccer history in the massive line of alumni spanning almost the entire length of the field.
The second half kicked off with the Billikens reinvigorating the game as they began to dominate play. An early goal from the Cougars in the 52nd minute left the Bills searching for an opportunity.

With just under 16 minutes left in the half, a cross to the head of senior forward Anthony Brown went into the back of the net as the crowd leapt to its feet, but the ball was called offsides and the Billikens remained down.

The Bills kept the heat up and managed to find the equalizing goal with two minutes left in the half. After a shot from junior forward Leo Novaes, Brown picked up the scraps, leveling the score.

The two periods played out similarly,, with the Bills controlling play and outshooting SIUE 7-0. The game concluded at a 1-1 draw.
The Billikens, the previous holders of the trophy, retain possession until 2019 when the next match will be played at SIUE.
Senior defender Lennart Hein was named MVP.

After a week off, the Bills opened conference play with an away match against Dayton on Saturday, Sept. 29. The first half closed at 0-0 with all the action set to come in the second half.

A total of four goals were scored in the second half. Freshman midfielder John Klein opened the scoring in the 59th minute, and Novaes gave the Bills a 2-0 lead under four minutes later with a free kick goal.

A minute later, Dayton cut the lead in half, and then tied the game in the 77th minute. Two periods of extra time could not separate the sides, and the game concluded 2-2.
The Bills are back in action against La Salle at Hermann Stadium on Oct. 6.