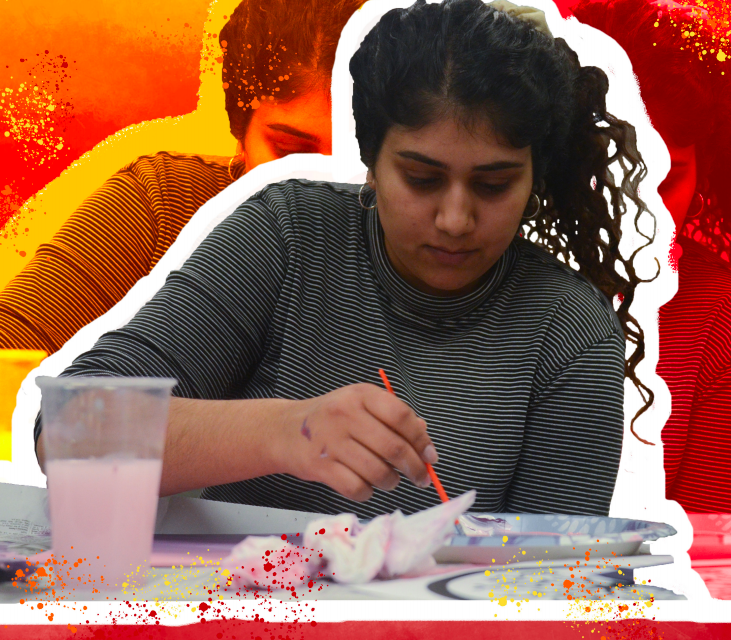 As I walk into my former biology classroom, colorful Indian music paints the air. Students fill seats surrounded by plates full of pigmented splotches of red, blue and yellow. President of Hindu Students Community, Neej Patel, sits upfront speaking over a doc cam instructing students on their current projects. Immediately, I take to photographing students’ art and their pristine concentration, until they notice my presence and giggle.

On Oct. 11, The Hindu Students Community partnered with Interfaith Alliance to host a Painting Night, bringing together SLU students from all faith communities. Anisha Patel, service chair of HSC described the event’s intention as a small way to spark curiosity, a nudge towards raising awareness for other religions represented on the SLU campus. This is the first event of its kind, and the HSC executive board hoped that an activity like art—something that crosses so many cultures and religions—would reach a large and diverse audience.

Anisha describes her experience in HSC as a way to look into the Hindu religion and Indian culture, deeper than she ever had before.

She emphasizes that a community like HSC is more than just Hindu students, and that learning about other cultures and faiths is “just as cool as learning about your own.” At SLU, there is a great accessibility to connect and practice any faith, whether that be Hinduism, Catholicism or Islam. Anisha cites SLU’s motto as she appreciates that there is a general presence of an understanding of a greater purpose—something she believes unites all faiths.

The piece Neej instructed students with consisted of a tree supporting branches that led to various symbols of prominent religions on SLU’s campus—an Aum for Hinduism, a crescent moon and star for Islam, a Cross for Christianity, David’s Star for Judaism and other religious symbols. While many people participated in the direction for this piece, Neej encouraged the students’ individualities in their creative expressions.

While speaking to another student, Nirali Thakkar, we began to explore the deep connections students develop in religious organizations. As a member of a Christian Life Community, I’ve found my own experience important during the transition to college, and Thakkar expressed similar ideas, explaining that the E-board was a welcoming environment that allowed her a place to build connections during her freshman transition.

At home, Thakkar grew up in what she described as a strong “religious bubble” and entered SLU closed-minded to the idea that everyone has their own pathway to God. Soon into her freshman year, she began to explore other ways people celebrate the same holidays and traditions, which made her more aware of diversity not only in her own religion, but in others as well.
Thakkar believes that exposing herself to other practices of her faith enhanced both sides of religious experiences.
As our conversation continued, Thakkar began describing a moment when she first encountered opposition in her own viewpoints, which later inspired her to major in psychology and study the stigma of mental illness in her religious culture. “I heard someone from my own religion basically say that mental illness isn’t real…that if you have God’s thoughts with you, how could you even have depression?” she said. At first, I was struck by such an uncanny experience I had faced in my own religion a few days earlier. After reading through the blog of a Christian cognitive scientist, I stumbled upon her views on psychopharmacology as treatment for mental illnesses. It struck a chord with me, invalidating my own struggles and faith. I had decided it would be an interesting topic to explore for a research paper in my theology class, just as Thakkar described before. In awe of this extremely deep connection we had made across our own religious borders, I shared this with Thakkar. She instantly agreed, stating, “I think that events like this open up the door to be more mindful of other religions. You’re a Christian and I practice Hinduism, but we definitely just connected over this idea.”
This conversation opened my eyes to the importance of interfaith experiences, like this paint night, in a way I never expected walking into the doors of Davis-Shaughnessy 173.
Making new friends, trading phone numbers and connecting with people I’d never meet otherwise is a testament to the importance of interfaith events on SLU’s campus. As religious or non-religious people, we allow ourselves to get so wrapped up in our own ideas, but it’s become clear that at the core there is always something that connects each of us from within.