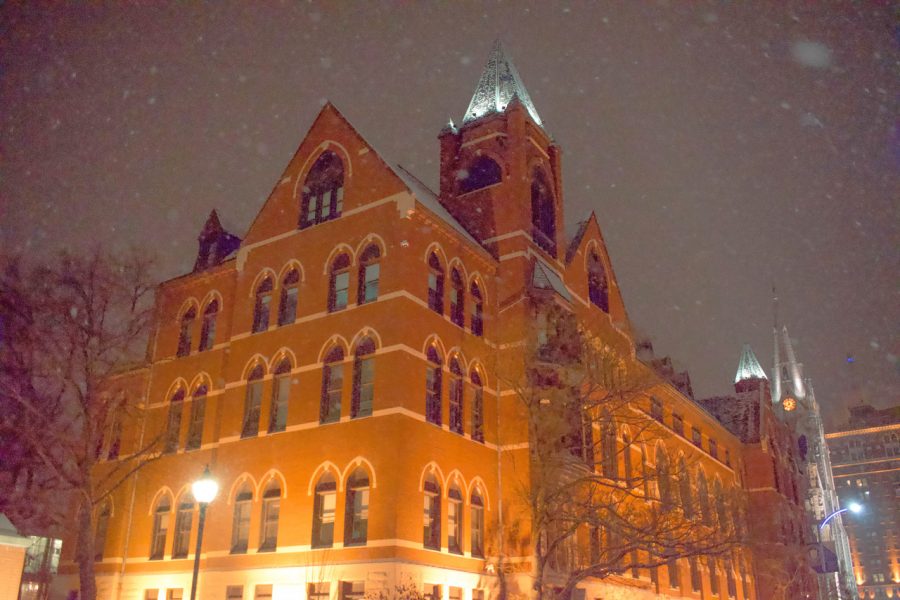 “If this happens to this kid, could it happen to us?” said John Waide, a 40 year historian and SLU alumus as he questioned the phenomenon that took place on SLU’s very own campus in 1949.

Even today, the exorcism of St. Louis is only dared to be whispered in rumor or heresay. Now, on its 70th anniversary, the question of what exactly happened still haunts us—especially with the exaggerated portrayal of the events from the 1973 movie “The Exorcist.” Contrary to popular belief, there is more to the story than a creaky fourth floor in the oldest building on our campus.

Robbie Mannheim, the alias for the child who fell victim to these chilling events, experienced strange symptoms for four months in 1949. His troubles began with peculiar noises such as scratching and dripping as well as various objects including holy water being thrown against the wall—until one day, he became the target. He discovered several marks engraved on his body spelling bone-chilling messages of “Hell” and later, “Louis.”

With the situation worsening in their Maryland residence, Mannheim’s family took the message “Louis” as a sign to move him to the St. Louis area to live with relatives. It was also the place where his recently deceased aunt had lived. These strange events started to take place around the time of her death, after he had apparently tried contacting her using a Ouija board.

But that was only the beginning.

Mannheim’s condition still worsened in the Bel Nor home in St. Louis. A relative of Mannheim’s who was attending SLU and was an inhabitant of the Mannheims’ home confided in one of her professors, the Rev. Bishop, about the crisis. This spurred the involvement of several SLU faculty and priests. One in particular, the Rev. Bowdern, recognized that something was not right.

Bowdern and other SLU faculty then decided an exorcism was necessary as a last ditch effort to rid Mannheim of whatever—or whoever—was tormenting his spirit. Bowdern attempted the exorcism rituals several different times despite growing opposition from Mannheim. On Easter weekend, while Mannheim was staying at the Alexian Brothers Hospital, Bowdern knew that his efforts had finally worked when Mannheim exclaimed suddenly that “[He] was gone.”

Waide recounts conversations that he had with two relatives of Bowdern, the primary exorcist,and offers that he found it “particularly compelling” that “they both said that Father Bowdern had lost nearly 40 pounds over this ordeal” as well as the fact that “he truly believed that he was in a battle with the devil, a true possession.”

To what extent did Mannheim’s monstrosities reach our SLU campus? At least to Waide’s knowledge, it did not happen in the locations generally speculated. In fact, Waide claims that Mannheim was never in places like DuBourg or Verhaegen Hall, rather he had been moved back and forth between the old rectory of St. Francis College Church and his home in Bel Nor for several weeks during the exorcism. The rectory has since been torn down to make room for a new rectory.

Beyond SLU, Mannheim’s story has infected pop culture. In addition to the book “The Exorcist” published in 1971, the film rendition based on his story was produced soon after. Several other movies portraying other exorcism episodes followed, as well as a more recent documentary released in 2015, titled “Exorcism: LIVE” which offers an in-depth look at the St. Louis house where Mannheim had lived. Even Waide’s presentations about the exorcism have been attended by thousands. “People are fascinated by it,” said Waide.

Randy McGuire, a colleague of Waide’s, interviewed the author of “The Exorcist,” William Peter Blatty. In this interview Blatty makes an important connection between the significance of the book and movie to its title.“Everyone misses the point of the book and the movie,” said Blatty.”It was about the priests and what they do to help the boy.”. Blatty’s statement highlights the significant efforts of Bowdern, Bishop and many other SLU faculty in the treatment of the boy and their willingness to help someone in need.

Waide acknowledges that he himself still “has a lot of questions” that have gone unanswered. He does not identify as a skeptic in the matter, but rather encourages those that want to learn more to “be critical in their evaluations and studies.” He suggests looking to resources such as the published diary of Bishop, who was one of the SLU exorcists. The full version is included in the book “The Possession” by Thomas Allen, who is another expert on the ordeal.

To sum up the entire ordeal, Waide states that “people believe what they want to believe.”

Whether you are a believer or a skeptic, there is no escaping the fact that the infamous exorcism of 1949 is—and will always be—a part of SLU’s history.