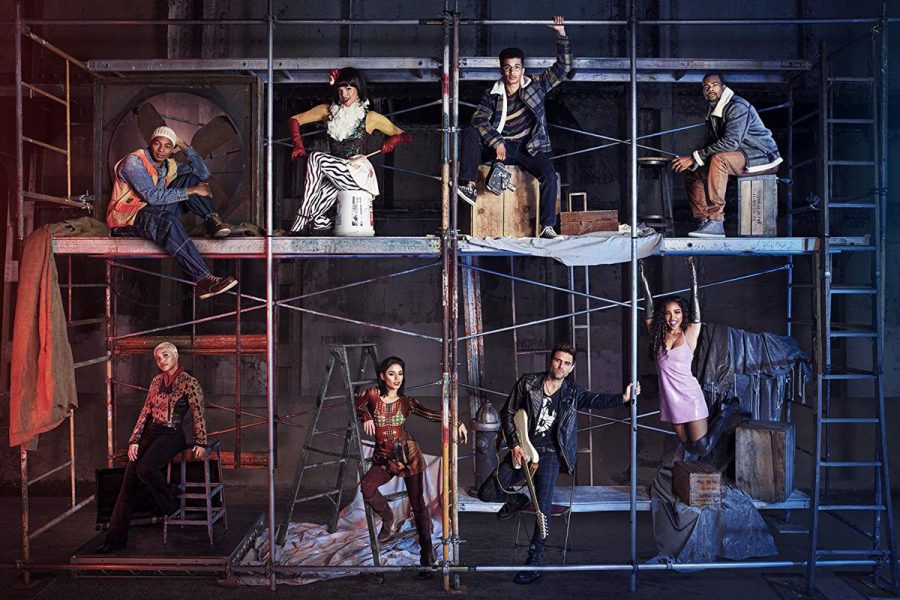 On Sunday, Fox aired its latest live musical, Rent, a 1996 Pulitzer Prize winning musical about a group of young adults living with AIDS. However, viewers who tuned in Sunday night were disappointed to discover that the “live” musical wasn’t in fact live at all. Brennin Hunt, the actor portraying Roger in Fox’s live TV movie went to the hospital after injuring his foot during a quick change in a Saturday rehearsal. Having not hired understudies, Fox decided to air footage taken during a dress rehearsal earlier in the week up until the last scene which featured Hunt sitting on a table with his broken foot propped up.

Despite the setback, as the cast said while addressing their nation-wide audience, “the show must go on.” While many viewers could tell the performance was less than perfect, most obviously with many sound quality issues, the aired version was very impressive for footage that was never meant to be seen by a nation-wide audience. Even with the majority of the show being pre-recorded, there was still a full audience and the staging, lights and costumes lived up to the high standards that other live versions of the musical have set. The actors also rose up to stepping into the exemplary roles that Rent is known for.

Jordan Fisher, portraying one of the main characters Mark Cohen, received praise from the online community for making the traditionally geeky, glasses-clad character his own while still staying true to the original lovable character. He joined an impressive list of previous actors who portrayed the same character including the original actor, Anthony Rapp and Neil Patrick Harris. Fisher, however is the first Mark Cohen of color and brought a certain swagger to the role that has not been seen in the past.

Vanessa Hudgens took on the role of Maureen, originally played by Idina Menzel, in her second Fox live musical appearance. While Menzel’s vocals set the bar incredibly high in her original performance, Hudgens had the attitude to bring the character to life.

The other actors brought the overwhelming emotion that the show is known for to the screen through the story of the AIDS crisis with statistics from the time period woven throughout the show. Although TV movies done in the past have been criticised for not translating well to the screen, Rent: Live stirred the same emotion in viewers as other stage versions and the movie are known to do.

The show finished with the last scene of the musical, trying to fulfill the promise it had made to the TV audience—a live show. Hunt, the main character in the emotional moment sat on the table with his casted foot propped up as his castmates changed their blocking to accommodate for his lack of mobility. As actress Tinashe, who played Mimi, was carried onto stage as her character was fading quickly, rather than run to his love, Roger sat in the same position, unable to move. The camera cut to a close up of his face as he screamed in agony at the sight of a sickly Mimi. What is meant to be a tear-jerking moment was quickly made laughable enough for me to rewind the scene several times to rewatch the awkward moment. It was clear that Hunt was struggling to keep the level of emotion that the scene required as a distracting cast popped in and out of the corner of the screen. Despite all of this, the cast, especially Hunt, clearly put forth great effort, ending a respectable version of the classic musical.

The televised event ended with a reveal of the original Rent cast singing the musical theater anthem, Seasons of Love. The Rent: Live cast members met their respective original cast member on another stage. However, just as viewers thought they had endured enough awkwardness in the final scene of the musical, the cast abandoned Hunt back on the stage of the last scene unable to move with his injury, creating yet another awkward moment where the actor could be seen in between singing actors. They could have put him in a wheelchair and wheeled him up to join the cast, but instead he sat alone behind everyone else. Again, another emotional moment made hilarious.

While it’s difficult to compare this version of Rent that was not meant to be aired to not only the past live TV movie musicals but also the widely loved other versions of Rent, the cast and crew adapted to the last minute injury to put on an impressive rendition of one of the most popular modern musicals. Going forward, hopefully Fox will consider hiring understudies for their casts and maybe the theater community will revisit the use of the term “break a leg.”