SLU’s First Ever UnDocuWeek a Success 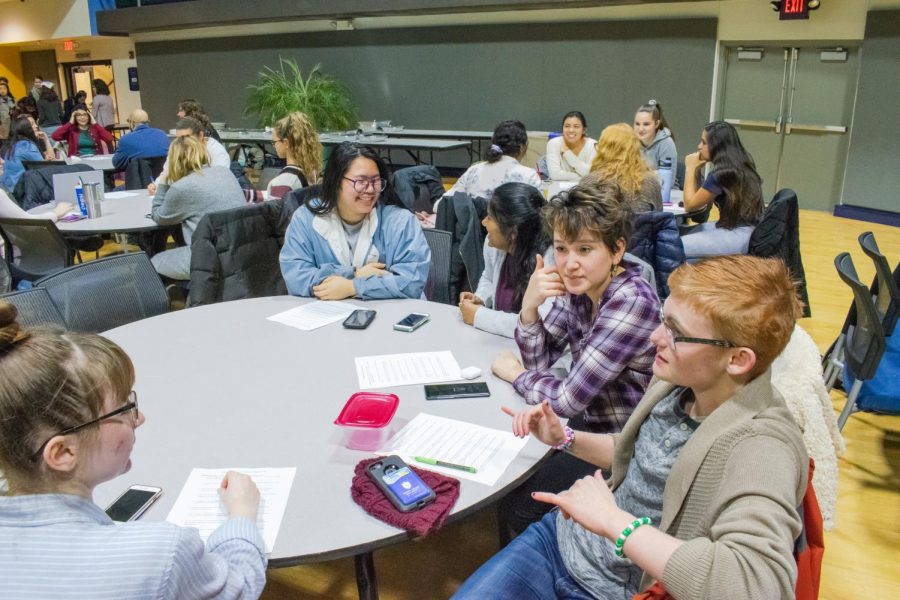 Hayley Hampton, an MLK scholar and sophomore studying health sciences, defines immigration as the “ability to leave one environment to go to another in hopes that there will be better opportunities.”

Elena Everhart adds that, “Immigration is especially important in America as it has the reputation as the land of the free. For this reason, it should be available to everyone.” She is also an MLK scholar and is a sophomore studying speech pathology.

Hampton and Everhart represent just two out of the over 100 students that flooded into the CGC last Wednesday for the “Chisme y Comida” event, sponsored by UndocuWeek. During “Chisme y Comida” — or literally “Gossip and Food”–  students were able to have open and honest conversations about immigration.

This event was part of SLU’s first UndocuWeek, which featured a week full of events that served to educate and raise awareness on the topic of immigration. Events consisted of a panel discussion, a movie screening, “Chisme y Comida,” and more.

Students in attendance–including those of the MLK scholars program, multicultural student organizations and others–were required to answer an individual survey consisting of 10 questions. This survey inquired of their personal experiences based on their citizenship status. Students were then encouraged to discuss these questions with each other using safe and inclusive diction.

Students soon discovered many discrepancies in their responses. These discrepancies exposed insecurities often faced by those of undocumented statuses, including, but not limited to, their employment, access to federal resources, safety and even education.

One survey question explored how citizenship affects education: “Growing up, was attending college more of a dream or understood expectation?” Differing responses to this question reflected the reality that higher education is often a privilege, unattainable without documentation.

In general, undocumented students are excluded from receiving federal aid like FAFSA, as well as from many scholarships and other need-based programs such as the A+ program in Missouri. States like Alabama, Georgia and South Carolina go as far to ban admittance of undocumented persons. Other states–including Missouri–do not provide in-state tuition without documentation. As higher-education costs continue to rise in the wake of these financial limitations, it is no surprise that the College Board estimates that only 5 to 10 percent of undocumented students pursue higher-education. Lack of a college education can be detrimental to one’s future employability.

Beyond education, responses also exposed the economic strain felt by the undocumented population. Undocumented immigrants, as well as members of DACA–Deferred Action for Childhood Arrivals–are ineligible to receive federal aid or benefits, including, but not limited to, food stamps, Medicaid and unemployment benefits. This reality is contradicted by the fact that those without documentation still pay taxes at the state and federal level without any benefit in return. This culminates in frustrations felt toward a system that victimizes those already most vulnerable.

Some students confessed to avoiding certain areas of high police presence in fear of being stopped and questioned about their status. In this way, their safety and well-being can be put at odds with their distrust of law enforcement.

Students admitted that back on campus they also felt confined by their status. For example, some may not have the privilege to study abroad because of a lack of a U.S. passport. For others, they may feel isolated because of the lack of resources in the form of advisors or even clubs on campus to support their needs.

UndocuWeek confronted these injustices faced by immigrants everywhere head-on through education and advocacy. After attending the Ignatian Justice Summit, SLU students Julia Murphy, Alex Hernandez, Jibril Muhammad and Rachel McBeath were inspired by the successes of other UndocuWeek events put on by universities around the nation to spearhead their own UndocuWeek at SLU. They then recruited Marisa Ornelas, another SLU student and advocate for immigration work, to help in planning.

Murphy comments that openly talking about immigration “sheds light on the fact that migrants are human beings searching for better opportunities. The current administration constantly demonizes them, so we must do what we can to counteract this toxic rhetoric.”

Murphy is hopeful that UndocuWeek will continue in the future. She recognizes that “immigration is an important topic to talk about everywhere” even if  “many people don’t realize it’s an important issue here, so far from the border.” SLU’s UndocuWeek events supported both local immigration efforts in St. Louis as well at the border by collecting clothing and shoe donations at all events.

Murphy encourages everyone “to keep our representatives accountable for respecting the rights of migrants,” and reminds us of our duty as students of a Jesuit institution, “ to shed light on these social injustices.