“Waitress” serves up a sweet show at the Fox 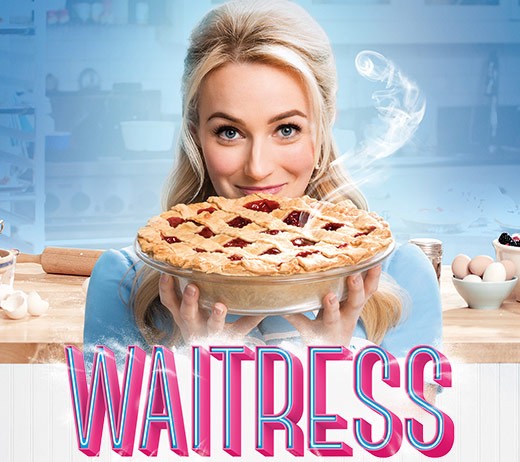 Courtesy of the fabulous fox theatre

The arrival of “Waitress” to the Fox is a welcome start to the spring season. The entertaining musical depicts life’s unexpected changes and serendipitous relationships. I’ve been a fan of “Waitress,” both the film and the soundtrack, but this was my first time seeing the musical. Although I’ve heard the soundtrack dozens of times, nothing could have prepared me for the beautiful, emotional journey of the stage adaptation.

“Waitress” is a musical about a woman, Jenna Hutcherson (Christine Dwyer), who becomes pregnant with the baby of her abusive husband, Earl (Matt DeAngelis). She works as a waitress at Joe’s Pie Diner and has a gift for creating pies with inventive ingredients and tongue-in-cheek names, such as “Betrayed by My Eggs Pie.” Her friends, Becky (Maiesha McQueen) and Dawn (Ephie Aardema) have their own struggles with relationships. However, when Jenna meets her new gynecologist, Dr. Pomatter (Steven Good), she grapples with the temptation of a heated affair with him. At its core, “Waitress” is a comedy, evoking laughs at every turn and witty line.

It’s evident that Dwyer had a lot of fun putting her own spin on the smalltown sweetheart. In her portrayal of the central character, she illustrated Jenna’s emotional turmoil beautifully, bringing tears to my eyes on several occasions. As Earl, DeAngelis gave a pointed, realistic image of abusive partner. His portrayal of emotional abuse encouraged audience members to examine the relationships in their own lives. In contrast, Good was delightfully awkward, and visibly charmed both Dwyer’s character and the audience. As Dawn and Ogie, Aardema and Morse played off of each other’s quirkiness, especially while singing “I Love You Like a Table.” McQueen brought energy to Becky’s character, complementing her sass with impressive belting and ad libs during “I Didn’t Plan It.” The cast members breathed life into their characters with great chemistry and I felt like I was watching the truly playful nature of friendship and early love.

The musical was entertaining for both the brilliant acting and catchy music, written by singer-songwriter Sara Bareilles. Bareilles definitely intertwined her upbeat piano pop into the songs, which the cast members performed passionately. Dawn’s solo song, “When He Sees Me,” has captivating variation in rhythm, tempo and intervals that Aardema impressively maintains. “You Matter to Me” is a tear-jerking, standout duet between Jenna and Dr. Pomatter that wraps the audience up in warmth and love. “Bad Idea (Reprise)” is a catchy song sung by six of the main cast members with a hilarious scene that needs to be seen to be believed. Finally, Jenna’s solo song, “She Used to Be Mine,” is an anthem for a lot of women struggling with their circumstances. The strings and piano accompanied Dwyer’s graceful voice, which balanced nostalgia and sadness.

The stage of “Waitress” was extremely eye-catching. The backdrop set the scene by using a clear sky that changed color to reflect the time of day. This backdrop also included telephone poles and fields to perfectly capture the feeling of a small town diner. There were baker’s racks filled with spices, sugar and real utensils that Jenna used to make pies on-stage. She kneaded dough and mixed “sugar, butter and flour,” breaking the fourth wall to instruct the audience how to make her pies. During stage transitions, Jenna typically stayed in the spotlight while the props and scenes move around her. Surprisingly, the accompanying band also played in the background of each scene. They reacted, danced and played their own characters in the diner. The staging was a nice surprise that immersed the audience into the show beyond its plot and music.

“Waitress” blends realistic characters, comedic dialogue and enchanting music to create a delightful musical. This sweet show is a must-see. “Waitress” is at the Fox from March 26 to April 7.