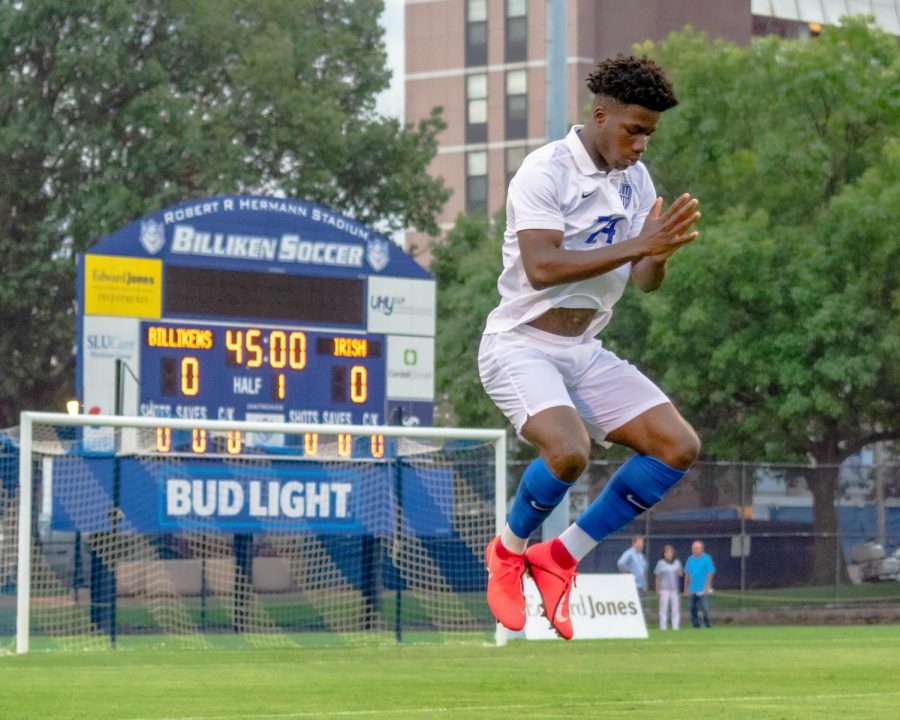 Wilbur and Orville Wright, Serena and Venus Williams, James and Dave Franco; these famous sibling duos have been instrumental in their respective fields, leveraging the intangible bond between blood to achieve feats never before seen. Saint Louis University Men’s Soccer added their own duo to the squad with the addition of Mujeeb Murana, younger brother of Quayyum Murana (Q).

The brothers were born in Nigeria and spent their early childhood there. It was there that the two developed a passion for soccer.

“Growing up in Nigeria was fun, but it was also difficult,” said Mujeeb. “All we did was play soccer because there was no TV and nothing else to do. We didn’t go to school all the time because there would be strikes, so sometimes you would take a month out, not going to school, and all you did was play with your friends and play soccer.”

“What are you feeding them?” other parents would ask their mother, as the two outshined their peers, scoring 3-4 goals per game. They eventually looked into higher-caliber teams and landed in the Houston Dynamo Academy, a development soccer program aimed to create professional-caliber players. The academy helped bolster their skills and eventually landed them on SLU’s roster.

In 2016, Q made his debut as a Billiken and remained a key player in SLU’s defensive unit. Three years later, Mujeeb has made his Billiken debut and seems to be a strong part of the SLU defense, playing at his brother’s flank.

The two never played on the same team before (except in street soccer), and getting the chance to play with his brother was a factor that drew Mujeeb to SLU. Though it was ultimately his decision, Q helped pull him along in the recruitment process.

“If I didn’t think SLU was a great fit for me or that St. Louis, the soccer or the city, wasn’t a good place for anybody…then I definitely wouldn’t have supported him as much as I did in his recruitment,” said Q.

Q is happy to bring Mujeeb into the Billiken family, and head coach Kevin Kalish is hoping that the brothers’ bond will have a positive impact on the rest of the team. “When we try to build a team, it’s all about trust and building strong connection…and you can’t get much more close than blood and being a brother,” said Kalish. “I think it could rub off on some of the guys as well.”

The Murana brothers know that and want to help build trust on the team, and they think their relationship can help speed up that process. Mujeeb said that because Q already knows how Mujeeb plays, he’ll be able to make risky plays and Q will trust him. The pair hopes that teammates will see the trust and immediately do the same.

A subtle advantage the two hold is their other language, Yoruba. The language throws off opponents and allows callouts to be made without the other team knowing the plan. With a quick “fún mi ball” (give me the ball), Q passes to Mujeeb and the opposing player is “o ti gé” (out of the game).

The two used to get in trouble for playing soccer. At one point, their mother hid the ball from them, but they still found it and played despite getting in trouble. “Now that’s what is helping us go to university—the thing we used to get whooped for. It’s crazy,” said Q, his brother nodding in total agreement.