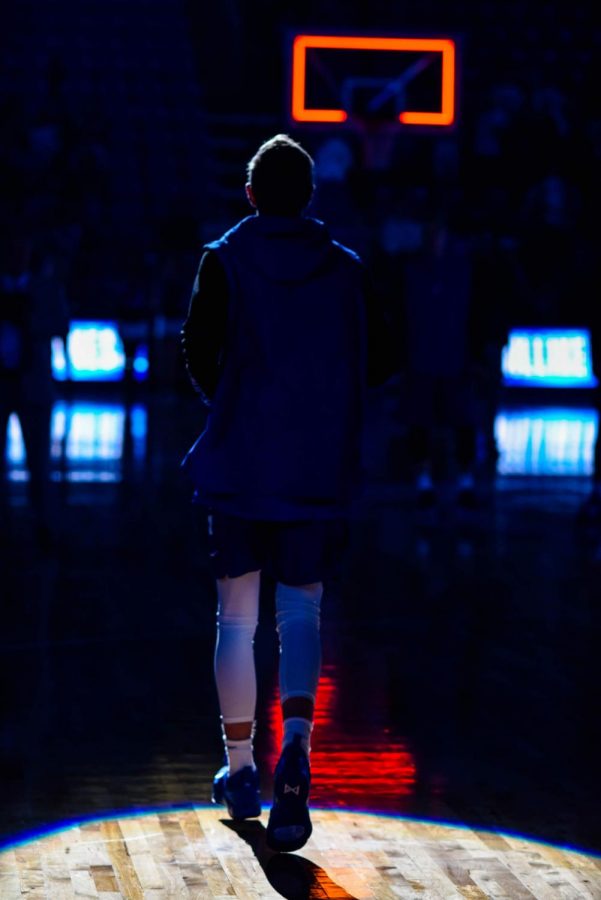 ShotTracker is a system that actively tracks player performance by reading player and ball movements. It gathers a whole bunch of statistics and shows them on an iPad in real time. Many of these stats were previously collected by hand, but the new tool allows coaches the flexibility to focus less on keeping stats and more on how to use those stats to make the team better.

The system works by setting up a grid of sensors all along the walls and rafters of Chaifetz. These are set up in a way so that many fans may not even notice the new addition at all with sensors blending in with their surroundings. The sensors then read movement from the ball, that has its own sensor in it, and the player tags. Each player has their own tag which they can clip onto their shoes. These come together to give a near perfect picture of what is happening on the court.

“It keeps the guys accountable because they want to get here and see what they did. A lot of guys like to come in [to the pavilion] and shoot with it on then go back and check out ‘what were my stats?’” said Wilson. ShotTracker lets players see their stats with an app on their phone an hour after their training session, giving them time to shower off, relax and come back to see their performance.

On top of stats like assists, rebounds and shooting percentages, it also tracks hot zones—areas where a player is shooting well. This can be a critical tool in shaping the Billiken offense. As a team that likes to get into the paint, this can show where the team may be falling short and where they are doing well.

Head Coach Travis Ford can use ShotTracker to gauge where the team is at. Ford can look at the iPad and see the stats and go from there. “[Ford] will say, ‘All right guys we had four turnovers and one assist. That’s not good enough,’” said Wilson, “usually [after] every time he says that, it’s always the flip.”

The fans can get in on the action as well. When games start up at Chaifetz Arena there is an app that fans will be able to use to see some of the stats. Though not as comprehensive as what coaches see, it provides an extra level of depth fans do not normally see.

This is a huge step forward for Billiken basketball in terms of recruiting, as well as player development. It is currently unclear as to how much in game impact will be seen from the ShotTracker, as NCAA must approve teams and leagues for use on the bench. On top of that, both teams must agree to use ShotTracker in game.

Billiken fans will have a chance to see how this new technology is helping the team with Billiken Madness on Friday, Sept. 27. The event will feature a scrimmage and will be a great opportunity to see the Bills in action.